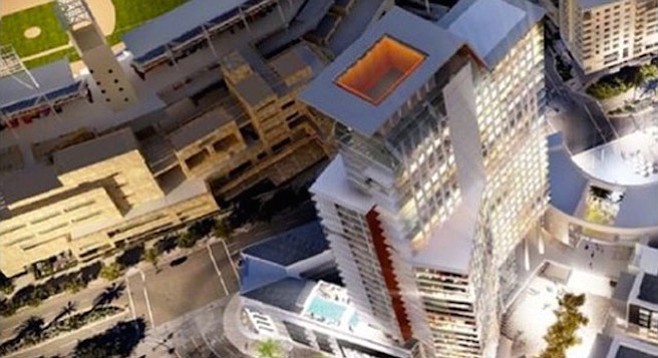 The long-awaited Ballpark Village development adjacent to Petco Park is another step closer to final approval.

On July 1, South Carolina–based development firm Greystar filed a tentative map of the design with the City of San Diego. The developer is now reviewing the project for potential environmental impacts.

First proposed in 1998, Ballpark Village is slated for a 3.99-acre parcel located east of Petco Park on Park Boulevard. According to the map, the 37-story, 678,779-square-foot building will house 713 residential apartments and 17 commercial stores. The apartments range in size from 539-square-foot studios to 1502-square-foot multiple-bedroom units. Rent for the apartments, as reported by the San Diego Union-Tribune last year, are expected to start at $2000 and could be as high as $3000. As part of the agreement with the city, 27 of the 713 housing units have been classified as affordable housing.

The project hit rocky ground after first being pitched by former San Diego Padres owner John Moores and the development firm he created to develop the area around Petco Park. Moores cited the struggling economy and other reasons for the delay of nearly two decades. Earlier this year, Moores's JMI Realty sold the rights to Greystar. In April of this year, city councilmembers approved the transfer.

The council needs to sign off on the tentative map at a public hearing, which will be held in coming weeks.

Can the residents watch the game from their apartment? What is considered "affordable" in a place where rents are $2 -$3k? There is no such thing as affordable housing in San Diego except for HUD housing.

You are confused. The 27 apartments that are designated "affordable housing" will be way BELOW market rate. Developers like this must provide a certain number of such units, or pay a very high fee. It's their choice.