How is dictatorship still a thing?

Gaddafi couldn’t even trust his own food 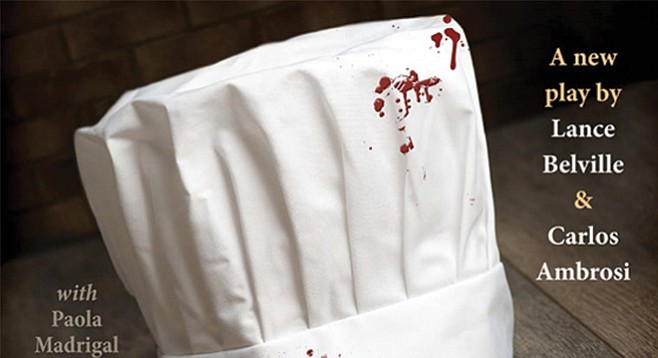 Unless you saw it at SD Fringe, none of you reading this will see Qaddafi’s Cook, which dramatizes the life of a Mexican chef who tripped on Ayahuasca and took a job as one of Muammar Gaddafi’s personal cooks. It showed four times, and now it’s gone; off to New York and Chicago. From there, who knows? Maybe it will come back to San Diego at some point, but I doubt it. This is fringe theater, and Qaddafi’s Cook will remain small in scope and action.

Which makes me want to extract something bigger from the play, because ideas don’t have to limit themselves to their packaging. They grow.

So, I want to know: How are dictatorships still a thing?

In Qaddafi’s Cook, one of the supporting characters, a Spaniard who prepares paella for “the Doctor,” meets an untimely end when he asserts that Gaddafi’s rule is so shaky that “[Gaddafi] can’t even trust his own food.”

This rings true. History indicates many dictatorships are a popular uprising away from total collapse. Iron-fisted as their rules may seem, authoritarian leaders often wield less actual power than they would have the world and their subjects believe.

Yet, Robert Mugabe has ruled Zimbabwe for 30 years, depression-stricken Venezuela crumbles under an authoritarian regime that’s looking suspiciously dictatorial, and North Koreans bow to the third-generation of a ludicrous personality cult.

If these rules are as fragile as conventional wisdom would have us believe, that they could be torn down in a day, then how is this still a thing?

Muammar Gaddafi’s Libyan regime should be a relic of the 1970s, a footnote to history, but it only ended with his death in 2011. Could there be a more sobering reminder of our collective vulnerability to the lure of authoritarian rule? Even the U.S. is not 100 percent safe. We could have succumbed to dictatorship during the Great Depression and WWII, but we got lucky. The Roosevelt administration only flirted with the idea. Still, the perplexing existence of dictatorial regimes suggests that people continually embrace an illusion of national power even as rampaging goon squads terrorize the populace. So long as the subjects of dictatorship perceive their rulers’ power as real, strongmen and warlords will endure.