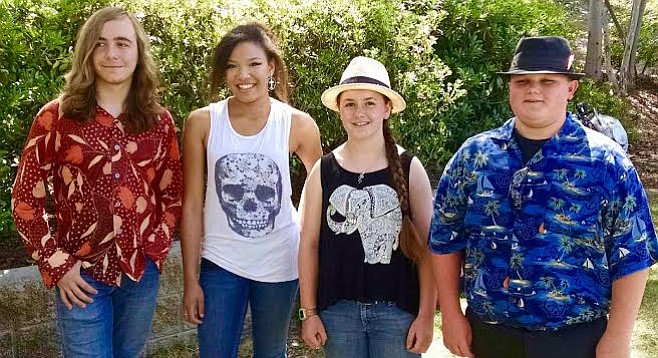 “Candye Kane was a great musician.” Guitarist Serena Geroe, age 15, admits she never saw the late blues diva perform live but says she follows her on YouTube. In July, the band that Geroe fronts, a quartet of teenaged bluesers who call themselves Minors in a Major Key, will take the stage as part of a fundraiser to help underwrite the Blues Lovers United of San Diego Summer Blues Camp. Organizers Ric Lee (of the Bayou Brothers band) and Spring Valley–based Wicked Harem Productions’ Rosa Lea Schiavone also hope to raise money enough to get their Candye Kane Memorial Scholarship fund up and rolling.

Minors in a Major Key 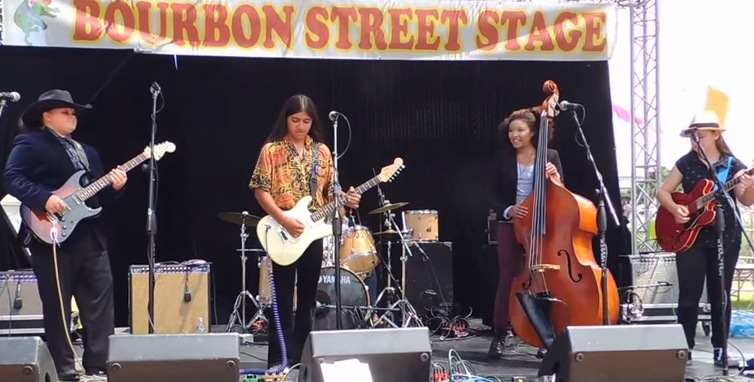 “Ric Lee was helpful in getting us together and rehearsing us,” Geroe tells me by phone. “He helps us get gigs.” Minors includes Geroe’s classmate Wesley Biafi on drums, 17-year-old bassist Angelica Yume Pruitt, and a 12-year-old lead guitarist named Benji Davis. She says the Minors are sometimes joined by 14-year-old guitarist Anthony Cullins, aka the Fallbrook Kid. “But it really comes down to the four of us. Anthony has his own band, and it keeps him busy.”

Geroe was gifted with a guitar on her eighth birthday. “The way I started, my mom was playing ‘Europa’ on her guitar, by Carlos Santana. So I picked it up when she was done, and I made it happen, too. I guess my mom saw potential. People don’t always expect to see young girls playing rock and blues.”

Fellow Minor Benji Davis, meanwhile, is in perfect contrast to Geroe’s cooler blues; his guitar solos are scorchers. The Davis clan lives in Clairemont; in recent months, Benji has become a regular at local blues jams that allow minors, sporting a sunburst Fender Strat and a cowboy hat with a fox tail affixed to it.

“About four years ago, my dad taught me how to play a couple of notes and some standards on his guitar.” Jimmy Buffett, for example. “I picked it up from there,” says Benji, who then taught himself some Clapton and Stevie Ray Vaughan licks. “I started out slow. Eventually, I took those licks and put them into my own playing, and that’s what got me into Proud Mary’s.” (The Clairemont eatery hosts a blues jam on Wednesday nights.) “I’m always gonna play guitar,” Benji says. “Whether I go anywhere with it, I don’t know. But I’ll always play.”