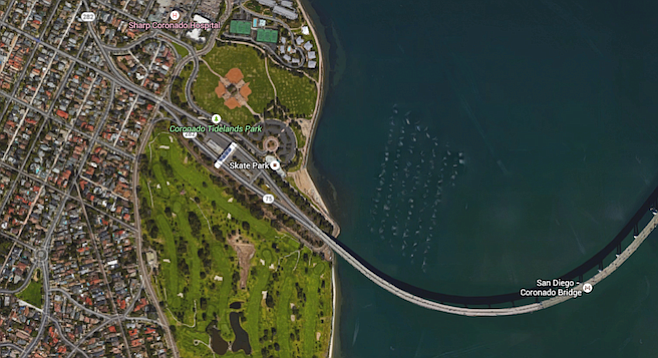 In Coronado, pedestrians face new restrictions on crossing two major streets at intersections near the bridge.

The nearest crosswalk with traffic lights is blocks away on Orange Ave., prompting some to take their chances. In recent years, serious accidents at the intersections involving children on bikes, and one pedestrian fatality, have led to lawsuits against the city and Caltrans.

Coronado City Council member Bill Sandke feels the signs “are more of a brute force measure to fend off liability” than a help to the city’s transportation planning.

While some residents say the road should belong to cars, others call for “complete street” changes that accommodate all ways of getting around.

“Sadly, National City beat out Coronado in being a pedestrian-friendly community in a recent study,” Sandke says.

But decisions about the highway lie with the owner, Caltrans, which isn’t required to even notify the city before making changes. A bill that would give control of SR-75 to the cities it runs through is being revised after the Coronado City Council voted in March to seek removal from the legislation. Sandke was the lone vote in favor of staying in the bill, if only to explore the option.

Last year, Caltrans infuriated many residents by taking another step to promote traffic flow — raising the speed limit on the road from 25 to 30 mph. The decision was based on a traffic survey and formula the state uses to set highway speeds. Now, the agency cites a review of pedestrian travel patterns at the intersections to support the no-crossing signs.

In fact, Coronado scrapped the idea of lights after residents of side-streets objected. The city is now awaiting review by Caltrans of other items suggested in the study to slow traffic.

Sandke says they have faced resistance and delays from Caltrans on many projects. The agency is “not nimble by nature,” he says, “but they promised in a spring meeting to fast-track our proposals.” Another option put forward by the city to make the streets more user-friendly was a pedestrian activated HAWK signal. Caltrans said no.

“Surface-level blinking lights at pedestrian crossings have strict criteria on where they can be installed,” Peinado says, since they act like regular traffic signals when activated. “They can be disruptive to traffic, as a person can actuate the HAWK and then never cross.”

They also have to be placed a certain distance from side roads and require enough pedestrians using the crossing over a given period — but Coronado never provided pedestrian data to support the installation, Peinado says.

Coronado mayor Casey Tanaka thinks the HAWK lights were turned down because they would interfere with the sequencing of existing Caltrans traffic signals at 3rd and 4th at Orange Ave. The no-crossing signs are “a prudent measure,” Tanaka says. “At a minimum, they will alert pedestrians to the difficult circumstances involved in trying to cross these streets during rush-hour traffic.”

Doesn't matter. If someone is killed a good lawyer will be able to sue the living daylights out of the city for not making accommodations for the safety of pedestrians. Signs mean nothing when the city knows that crossings are taking place regardless. The city needs to make it safe to cross where there is an attractive point of crossing and where their is a history of a propensity to cross. A lot of Coronado's economy is tourist based, it's time they wake up and realize that.