Gored by the IRS after gambling payday 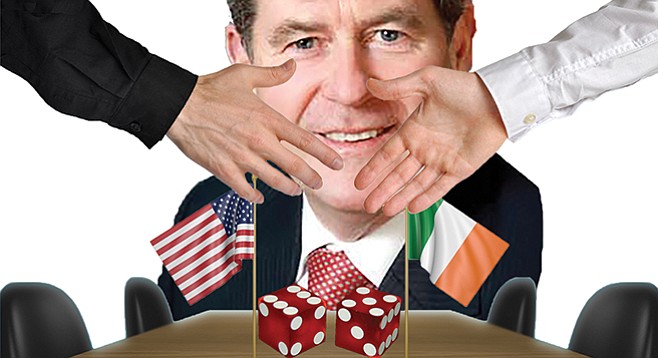 Alec Gores, brother of onetime San Diego Union-Tribune owner Tom Gores, came out a big loser in a round of betting with Irish billionaire J.P. McManus, but McManus is still fighting to hold on to his winnings. Alec (like his brother, a vulture takeover fund billionaire with Palestinian roots) gave up $17.5 million during an unidentified game of chance with McManus back in 2012.

The IRS later hit McManus with $5.2 million in taxes. He’s subsequently sued, asserting last month that a treaty between Ireland and the U.S. barred the levy. By latest report, the case will be heard this summer.

Meantime, Tom Gores, who owned San Diego’s U-T from May 2009 (when he bought it from David Copley) through December 2011 (when he sold it to Douglas Manchester), likes to gamble in Hollywood. In June 2011, the Associated Press carried a story about unlicensed California poker games drawing a spate of lawsuits, noting, “being sued is billionaire businessman Alec Gores, who along with his brother, attempted to buy Miramax Films last year.” (The Gores-owned U-T ran the item but deleted the words “along with his brother.”)

These days, Tom owns the Detroit Pistons and is looking to build a basketball arena in that city’s downtown. The California-based mogul has hired sports agent Arn Tellem to look around for a deal. “Arn is doing some heavy lifting on really trying to understand what’s the best thing for everybody,” Gores told the Detroit News on January 18. “I’d say we’re in the diligence process and we’re keeping a close eye on it but we just made a philosophical decision that we want to do more in Detroit.”

The team currently occupies the suburban Palace of Auburn Hills. “We all probably have thought about moving one day from our current houses,” said Gores, “but you still take care of that home and you respect it and it needs to be touched with all your emotions.” He added, “It’s always a tricky thing for us because this is our home and we need to adorn it. At the same time, we understand what’s going on in downtown cities and we’re looking at it very, very seriously.”