Can’t blame it all on El Niño 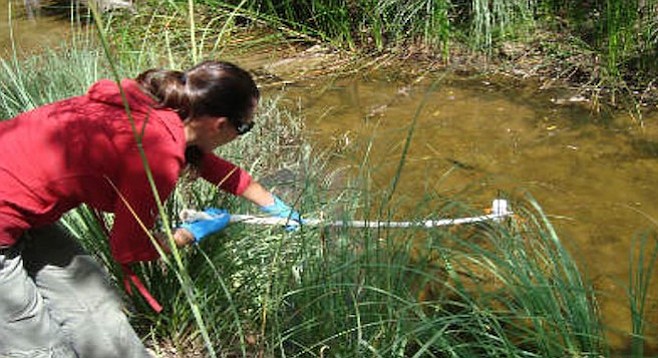 Pritchard said on January 20, "The biggest challenge to protecting water quality in San Diego is solving polluted runoff issues, which is our number-one water-quality issue. It’s a death by a thousand cuts, and the only solution includes holistic changes in how we develop and redevelop San Diego and small individual changes at our homes and businesses to limit pollution."

When asked on January 22 if the Imperial Beach contamination is worse than normal now, Kezer said, "It doesn’t appear so thus far this winter. Imperial Beach water quality is generally dominated by Tijuana River flow and unfavorable ocean characteristics."

"If El Niño leads to more frequent, higher magnitude precipitation events in the Tijuana River watershed, it could exacerbate impacts to Imperial Beach….

"The treatment plant was built by the International Boundary and Water Commission to handle dry weather flows from Tijuana. When the currents flow north, Coronado may be impacted."

As to why Shelter Island has this problem and not Harbor Island, Kezer said, "Water quality impacts at Shelter Island are thought to be due to the significant bird presence at this beach. The [health department] is sampling this beach weekly during dry weather to determine when the water-quality advisory can be lifted."

When asked why other parts of Mission Bay have polluted water apart from the recent East Mission Bay sewage spill, Pritchard said, "Mission Bay is a human-made bay and does not have great water flow through the back parts. So, water isn’t flushed out enough and problems tend to stay put and magnify themselves there."

Kezer said, "When water-quality impacts affect bays, it takes them longer to clean up. Some parts of Mission Bay have more surface water inputs than others; Tecolote Creek or Cudahy Creek, for example, which leads to a higher potential for poor water quality in these areas."

As far as the sewage spill, Kezer said, “[The health department] lifted the Mission Bay closure on January 21 after receiving sample results which indicated that sewage impacts had attenuated."

When it comes to the ongoing contamination from the harbor seals at the Children's Pool in La Jolla, Pritchard said, "The county doesn’t really test the beaches here. They know, with the seals, there is likelihood of high bacteria counts, so they keep the advisory at all times. It’s here to stay as long as seals keep pooping in the water."

Kezer said, "This area continues to get tested outside of the seal-pupping season and when possible. Seals often block our sampling location access."

A swim guide app tracking water safety for more than 400 beaches in California is available for smartphones.

in Imperial beach, I thought that during rains the water and trash cross from mexico at smugglers gulch, goat canyon, and yogurt canyon whether or not the treatment plant is operational