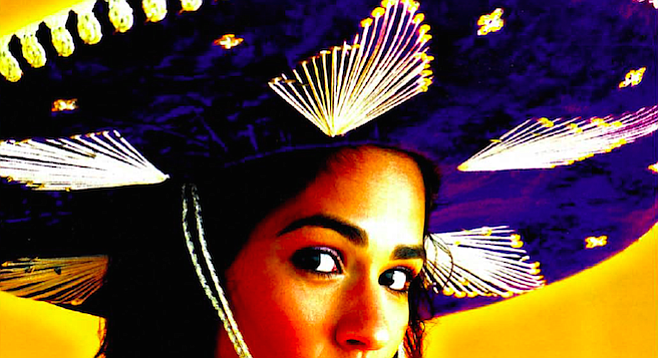 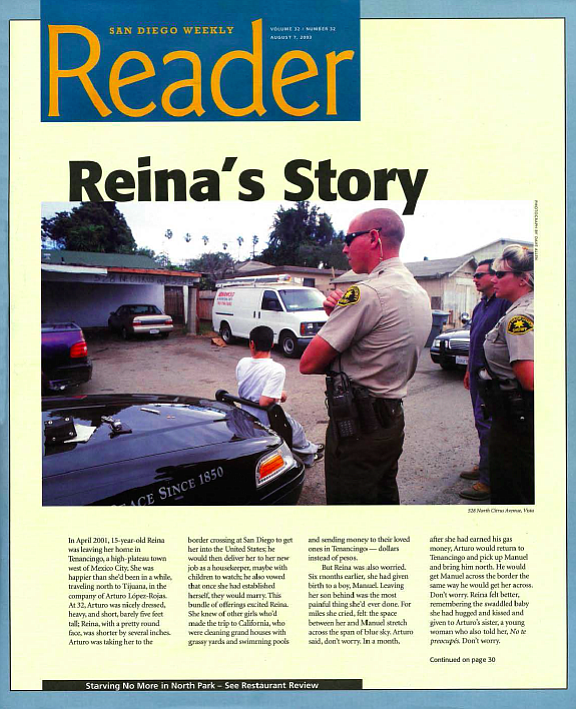 One girl drew a map to 528 Citrus Avenue, where she was imprisoned. She wrote at the top “casa de prostitución” and slipped it under the door of Rick Castro, a deputy sheriff in Vista.

In April 2001, 15-year-old Reina was leaving her home in Tenancingo, a high-plateau town west of Mexico City. She was happier than she’d been in a while, traveling north to Tijuana, in the company of Arturo López-Rojas. At 32, Arturo was nicely dressed, heavy, and short, barely five feet tall; Reina, with a pretty round face, was shorter by several inches. Arturo was taking her to the border crossing at San Diego to get her into the United States; he would then deliver her to her new job as a housekeeper, maybe with children to watch; he also vowed that once she had established herself, they would marry. 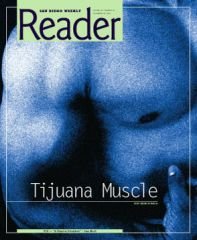 "The calf muscle. It's not just Mexicans but all Latinos. That's the big weak spot. It's rare for a Latino to have big calf muscles."

The fitness craze crosses the border.

"This gym, NeoSpa, opened in 1988. It was started by a Russian group that came to Tijuana. They came up with the name and made the original investment. They also opened a disco and a health clinic -- a laser clinic. They never paid their rent. They defaulted on the rent for about a year. In 1989, they disappeared. "I believe they were from Moscow. I heard a few rumors about them, but I never found out if the rumors were true. They did have a Cuban lawyer. For as flashy as they appeared at first, in the end they disappeared. "These Russians had a complete misconception of what a gym should be. They actually hired a doctor to perform blood tests on people who wanted to be members of the gym 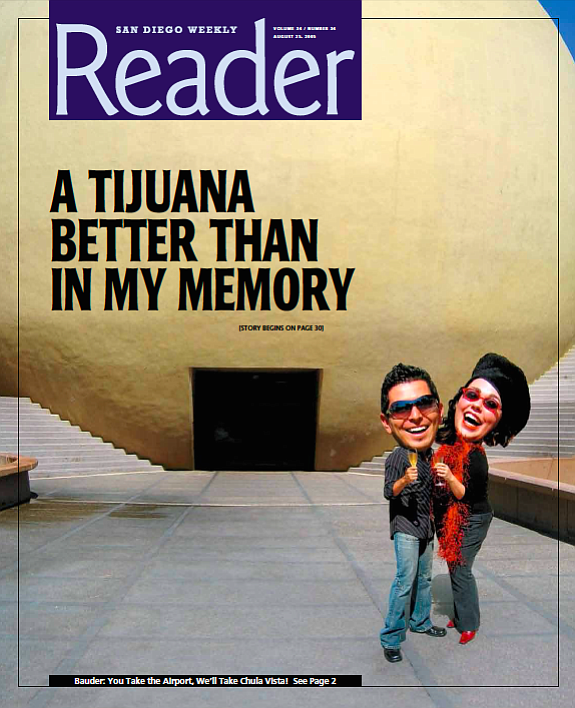 La Bola. Right where Pac-Man's mouth would be was the entrance to the building.

A Tijuana Better Than In My Memory

Any kid who reaches the age of 18 in San Diego knows about the endless clubs of Tijuana offering cheap beer and margaritas to those young adults who are old enough to die for their country but not to drink in it. We followed the masses of military boys and college girls to Avenida Revolución, where bars blasting everything from techno music to the Beastie Boys were set next door to each other. 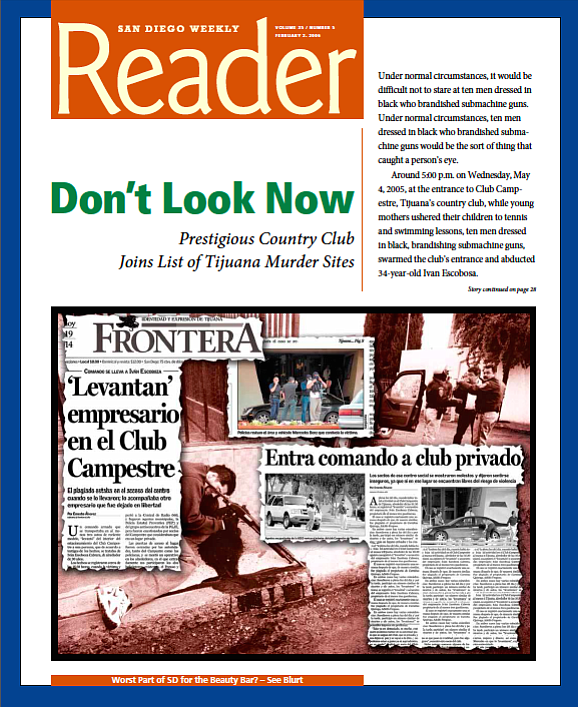 Under normal circumstances, it would be difficult not to stare at ten men dressed in black who brandished submachine guns. Under normal circumstances, ten men dressed in black who brandished submachine guns would be the sort of thing that caught a person's eye. Around 5:00 p.m. on Wednesday, May 4, 2005, at the entrance to Club Campestre, Tijuana's country club, while young mothers ushered their children to tennis and swimming lessons, ten men dressed in black, brandishing submachine guns, swarmed the club's entrance and abducted 34-year-old Ivan Escobosa. They abducted Escobosa from the entrance's polished green-slate steps, only a few yards from where two dozen color and black-and-white photos mounted on the lobby's walls illustrate the club's 57-year history. 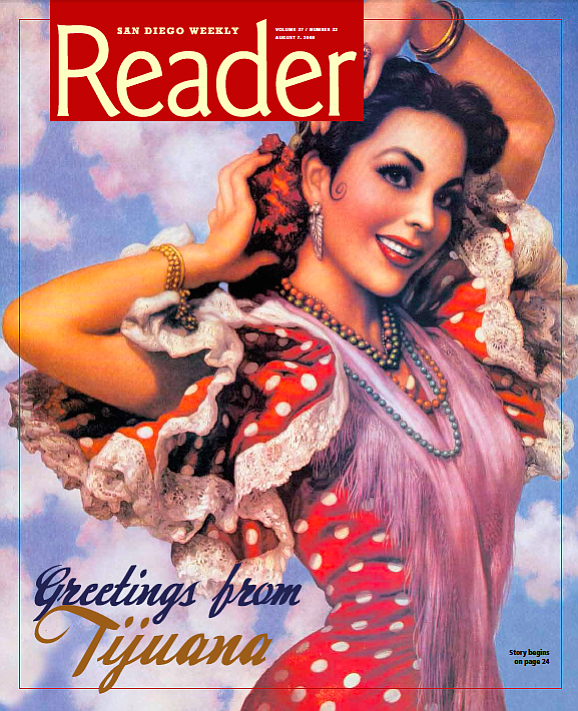 January 28, 2008 — I am taking pictures in the Zona Norte area when two police officers push me against the wall of the Miami Club and take my camera.

A mile east of the Tijuana International Airport is an area police call El Fin del Mundo, the End of the World, where drug-cartel assassins dump their victims. Both Mexican and American citizens have been found there. On December 18, 2004, according to Sergeant Tom Bulow of the San Diego County Sheriff's Department, San Marcos resident Noé Chávez García was lured to Tijuana by two acquaintances who shot him several times and left him in this corpse-disposal zone. He survived his wounds to tell his story to the FBI and Mexican officials. His is a rare case — he lived. 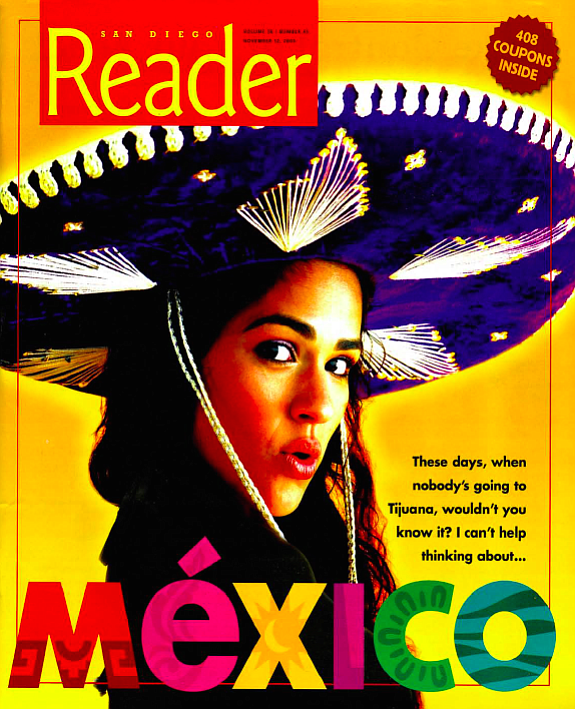 The Tijuana of my heart and soul

Why Tijuana? That’s what everybody asks me these days. I know. These days, the headlines about Tijuana feature murder, mayhem, and misery. But here’s the thing. These days, when nobody’s going to Tijuana, wouldn’t you know it? I can’t help thinking about Tijuana…

At the risk of sounding nostalgic, I’m getting nostalgic about the place. Like, in the Blind Lady Ale House in Normal Heights the other night, I got to talking with this binational fellow, Gonzalo. About, natch, TJ. “The TJ I love is no more,” he said. “It has lost its identity. Look what’s gone: the bullring, the Jai Alai, Agua Caliente racetrack, the casino. TJ never was beautiful, but at least it was different. And now, nobody goes down there anymore. It’s empty.”

He got me thinking. What is Tijuana turning into? East L.A.? What about the violence? And, yes, if you’re a turista, you do have that thing in the pit of your stomach. Let’s call it wariness. You wonder, Why risk it? What is Tijuana to me, anyway?