Should I surf today?

Stay home or suit up and head out? 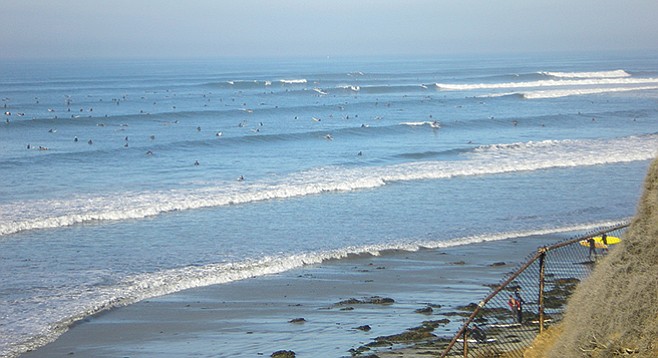 The surf is big today, scary big. Surfline.com says it is six to eight feet at Tourmaline Cove, with some sets double overhead. At P.B. Point (False Point) the projections are for over 10 feet, with some sets…too big. A six-foot wave is plenty big.

I check on the water temperature. 56 degrees. There is a brand new $550 Patagonia wetsuit hanging in my closet that should alleviate the concern about the cold water…but it doesn’t. Booties are okay, but gloves are kind of wimpy to wear when surfing in southern California.

During normal surfing conditions the waves break twice, the inside break and the outside break. In gigantic surf a third break appears on the way, way outside. To get out to the big surf an arduous task lies ahead.

So, I decide to stay home. Then the phone rings and it is Jason, my surf buddy. He tells me we are going out for a surf session. This is the primary reason for having surf buddies — to shame us.

So, I suit up and head out. With booties I don’t feel the cold water until it is halfway up my chest, and even then it is not so bad. And the paddle out is not nearly as tough as I feared.

Then I take that first long drop on a big wave, make the bottom turn, and start gliding along the wave. I don’t feel the cold, I am not tired, I don’t feel lazy, and I have no fear.