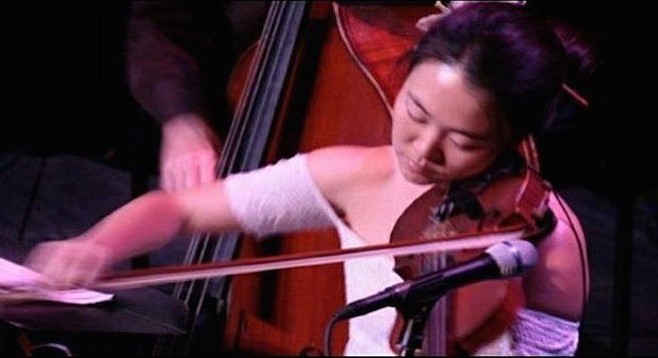 In a town full of virtuoso violinists and fiddlers, Jamie Shadowlight cuts a unique figure as she bears the bow down on her five-string NS WAV electric violin, feeding the resulting sounds through various processors and pedal effects that bend the notes with guitar-like flourishes (delay, wah-wah, fuzz, distortion, etc). “I also play some keys, guitar, and write songs,” she says. “I like to explore and expand the context of the violin in music and create different live-performance shows.”

Originally from Seoul, South Korea, Shadowlight was still in grade school when she began playing violin and piano. While living with her family in Torrance, she was already racking up accolades and awards, eventually forming a classical trio that took home top honors at that city’s Bach Festival. By the time she got to San Diego, her musical interests included everything from Leonard Cohen to David Bromberg, Jimi Hendrix, and the Grateful Dead (who she once followed on tour as a Deadhead parking lot performer).

Her playing encompasses everything from jazz to bluegrass, rock, Latin, and classical in various ensembles with other locals like Mikan Zlatkovich, Daniel Jackson, Chuck Perrin, Julio de la Huerta, Joe Marillo, and more. Ambitious local performances have included a version of West Side Story staged with jazz player Gilbert Castellanos as a Latin love story for trumpet and violin, as well as a Comic-Con-themed program called Jazz Meets Stars Wars, wherein she appeared in costume as Princess Leia. “I like to put together my own projects using a variety of different musicians in collaboration, depending on the vision for the show. I also play in many different bands as a hired gun for shows and sessions, and I love it. 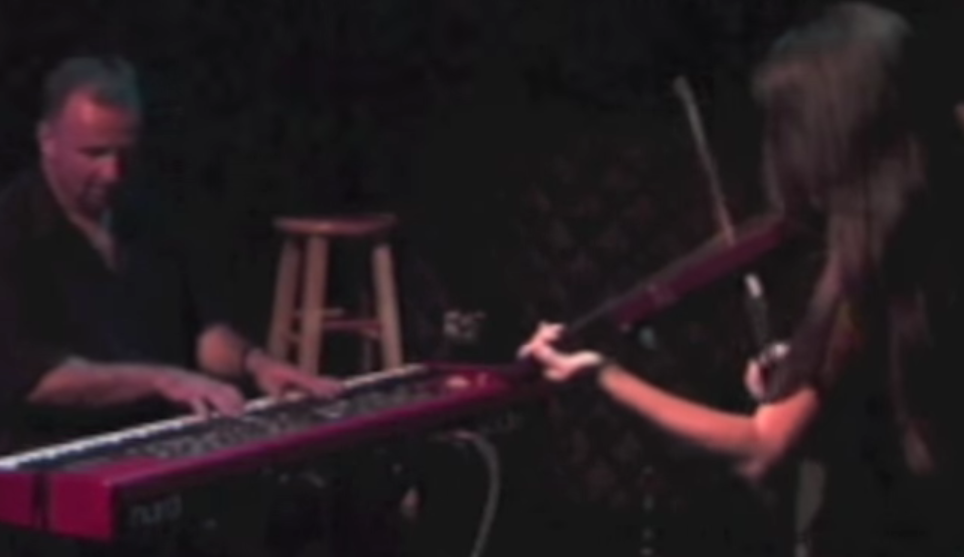 “I’m always involved in something new and have been exploring stream-of-consciousness expression as an art form.” Shadowlight’s debut album, Music from a Love Shared, was released in 2004, and her stint with the Western Collective saw the band nominated for best Americana Album at last year’s San Diego Music Awards. She appears Friday, January 22, at 98 Bottles in Little Italy.

WHY THOSE PARTICULAR ARTISTS?

“The arrangements, the songs, the feel, and the musicianship is why. They all are wonderful in so many ways. I often go through music like water. I have a huge playlist of amazing music, and I move through inspiration like a fish swimming in the sea. When I’m not listening to music or playing music, I’m listening to the silence or the world around me.”

FIRST SONG YOU LEARNED TO PLAY ON THE VIOLIN?

“There was no choice in a first song, you can only play what you can play on the violin at [age] five. Probably it was ‘Twinkle Twinkle Little Star.’”

“Hmm, the Vaginals come to mind for both.”

“If I had to choose one, I would pick the Beatles.”

“I regret my camera was not charged when I ran into Elvis and the Yucca Man jamming in the high desert. So sad still.”

“I don’t live or think in regret. Everything leads me to now, which is a beautiful place, so I live in gratitude. But, if I had to think about it, I regret not buying a house 15 years ago.”

WHAT SONG BEST DESCRIBES YOUR LIFE?

“‘Wave,’ by Antonio Carlos Jobim. ‘Just close your eyes, for that’s a lovely way to be.’”

ANY FEARS OR PHOBIAS?

WHEN DID YOU MOST FEEL LIKE A STARVING MUSICIAN?

“When I had to pawn my violin at the Carano’s pawnshop. But I knew it was safe there, and I got it back in a few days.”

EVER COME CLOSE TO KILLING SOMEONE?

“I can’t answer this at the advice of my legal team [laughs]. The key word here is ‘close.’ Ah, the control and Zen of the almost.”

BEST THING YOU EVER HAD TO LET GO?

“My partner John Paul Jones, who passed away from cancer.”

“The first one that was actually mine was a cat named Ms. Keys. I was 18, and she adopted me. She liked playing the piano. Daniel Jackson used to come by and play with her...she would follow his hands, and he would play to whatever she played.”

THREE THINGS WE DON’T KNOW ABOUT YOU?

“I love doing nothing.”

“I have a very dry sense of humor at times.”