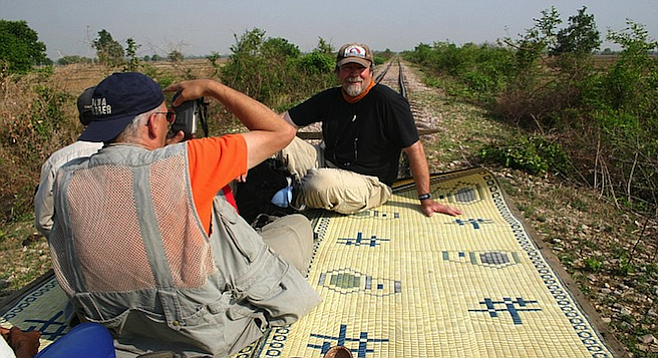 On my third run I am getting the hang of things, taking cues from the pig next to me to see how far he leans into the turns while ducking in time to avoid the lower tree branches. After swallowing several bugs, I pull up my bandana and give up trying to keep my sunglasses free of road kill. It is 120 degrees, I am soaking wet, and having the time of my life. 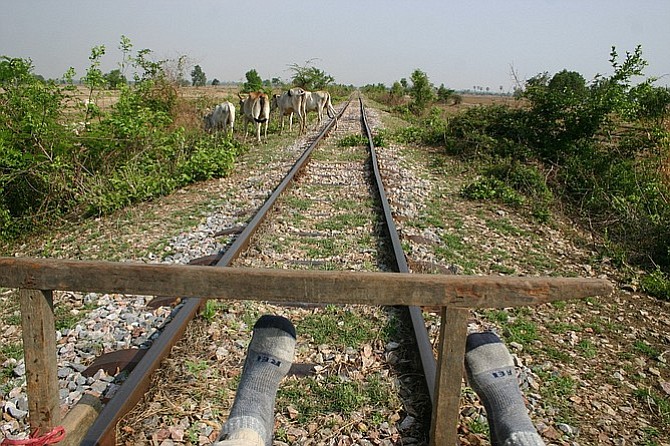 Cows on the track.

I'm riding the Bamboo Train that transits the jungles of central Cambodia. As transport goes, it's a hoot: an over-the-top, open-air thrill ride that can kill you like a bug without warning.

The Bamboo Train: a history

The Norry train, as locals call it, was born during the second half of the nineteenth century when the land was called Indochina and French colonists filled its jungles with plantations. They grew coffee and bananas among other things and built this narrow-gauge rail system powered by tiny steam locomotives as a cheap, efficient way to transport their produce from jungle to market. Old photos show that it looked like a children’s ride in an amusement park, but it did the job.

Fast forward a century to the overthrow of the French regime throughout Southeast Asia by communism, and with that the little trains came to a halt. The Khmer Rouge, under Salith Sar (commonly called Pol Pot), took power and brutally emptied the cities, driving the entire population of the nation into the jungle in an attempt to turn back the clock to a stone-age agrarian society. Such an evil regime was, of course, doomed to failure, but during this reign of terror the trains, along with every other type of vehicle in the country, were intentionally destroyed. For five years, the only forms of transport within the country were water buffalos or walking. Fortunately, the tracks were left behind, seemingly too insignificant to bother with, but the jungle people knew where they were and remembered them.

With the defeat of the Khmer Rouge and the withdrawal of invading Vietnam in 1975, the jungles of Cambodia, experiencing their first real peace in over a thousand years, became the only viable highway system for the poor and the refugees created by those wars. Battles provide tons of scrap metal, and the enterprising jungle dwellers cut down old jeep axles to size, welding them together to fit the aging steel wheel wells to the miniature train tracks. On top of these axles they placed an elevated bamboo mat to sit on.

The first trains were pushed along by a long pole, much like the gondolas of Venice, but obviously that method was laborious and slow. Small outboard engines were soon mounted on the back, connected to the rear axle by an oval strip of rubber cut from a tire to act as a drive belt, and the current incarnation of the bamboo train was born. In fact, hundreds of them began to cruise through the jungle. 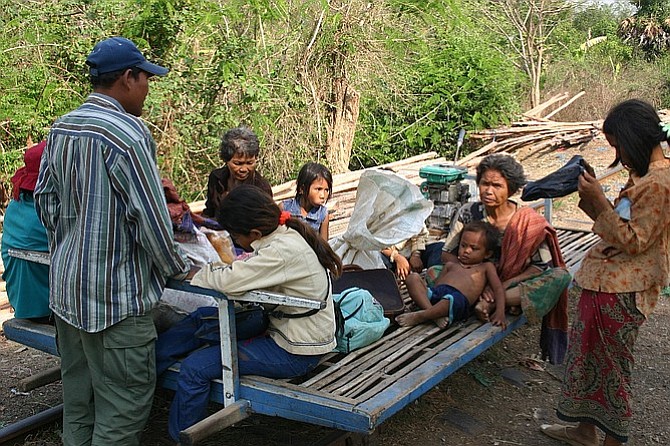 Cambodian family on the Bamboo Train.

Today, the government has officially banned them in many places as being unsafe, but they still continue to run. Most local officials not only turn a blind eye to their operation, but ride them themselves.

"Things are different in the jungle"

The Bamboo Train crosses a third of Cambodia. When it reaches the end of a line, at either end, everyone on board is expected to pitch in to either assemble or re-assemble it for the next run. Sometimes small children are in charge, and they know what they are doing. You can board it anywhere at any time because schedules and time do not exist in the jungle; someone is always ready to go. The price for locals is what they can afford; sometimes a coin or just a handful of rice and you might share space with a crate full of chickens – or in my case, an enormous pig.

Outsiders, especially Westerners, are gouged; a full dollar for a ride. And it is one of the best bargains in all of Asia.

Once the train starts rolling, it has been clocked at 30 mph and you have to lean into the turns, remembering that the mat you are sitting on is not attached to the axels but only sits precariously balanced on top of them, and you, the rider, are attached to nothing at all. A sudden shift of weight (or again in my case, an uncomfortable pig wanting to climb in my lap) can easily cause a derailment. There are no such things as passenger limits or limits on what passengers can bring on board with them.

You must turn off the motor and let the train glide to a stop, so alert anticipation is paramount for the drivers, but I have seen trains on long stretches with everyone on board sound asleep. The lack of rules and safety measures, even those that seem to be common sense to Westerners, are a cultural gap that would take a lifetime to explain. Things are just different in the jungle. 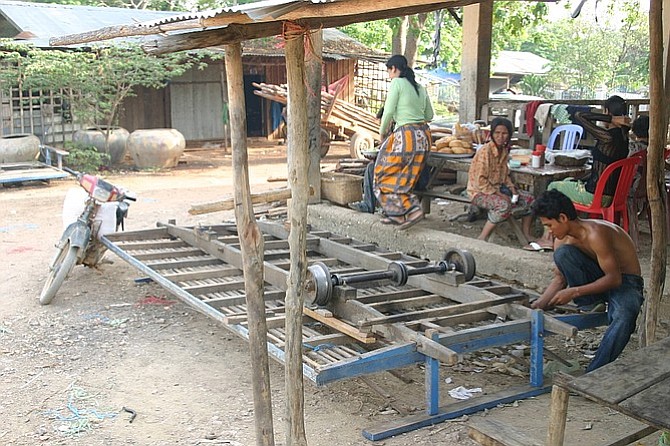 At any given time, trains might be heading in opposite directions simultaneously. If two trains meet, the one with fewer passengers must disembark. All on board will pick up the entire train from the track and carry it to the other side of the more populated train and re-assemble it there, and then both parties go their separate ways. This unspoken law is rarely disputed.

As in most war-torn societies, the intimate parts of a national culture endure no matter what. The Bamboo Train came into existence as one entity and morphed into a different one out of necessity. It was abandoned and forgotten, written off by more than one generation, then reborn. It survived numerous wars and found new life, making it a perfect metaphor for Cambodia itself.

The Norry train can be accessed from many different points, especially from Phnom Penh and Siem Reap, Cambodia’s two major cities. The best thing to do is ask a local taxi or tuk-tuk driver to take you to the nearest location.

There are no set stations, just gatherings of people waiting, and you will know when you see them that a train is on the way.

This bamboo train in Battam Bang, it located on northwest side of Tonle Sap lake, it's pretty good fun to take that and specially learn about Cambodia Technic history in from dark time up to now, last time i was on Tole Sap lake with disappointed about very murky water and not like as i imagined

Helpful material, To get engaged in a specific activity to make it an occupation take you very near to the victory. More passionate people make a future very bright as a qualified professional it partes de un trabajo de investigacion simply depends on you how you treat a person. Thanks