Daughter: “I will never call you Mom again.…” 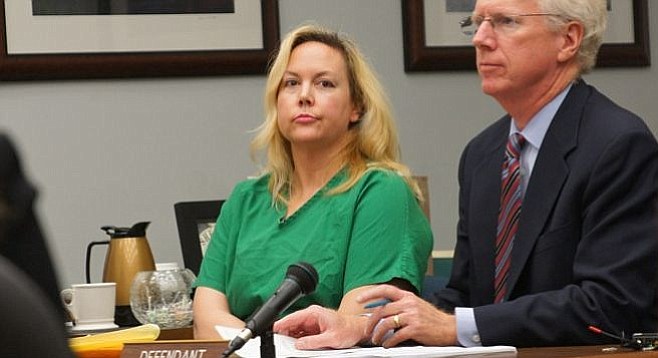 A San Diego Superior court judge told Julie Harper this morning, January 15, “Rather than go through a painful divorce process you took the easy way out.” And then he sentenced the former Carlsbad housewife to 40 years in prison for killing her husband Jason more than three years ago, in August of 2012.

Judge Bowman wondered aloud if Julie Harper had hoped she would be able to keep their nice house and custody of their children, if she got away with the killing. There were allegations during trial that Julie Harper had deteriorated due to abuse of prescription drugs, at the time of the shooting.

Before her sentence was announced, Julie Harper, 42, cried and bemoaned her situation and defended herself to the court for more than 40 minutes. She repeated her claim that Jason had verbally and emotionally and sexually abused her during their marriage. “He put me through absolute hell.”

12-year-old: “She is trying to weasel out of the punishment”

Before she got her chance to speak, Julie Harper heard written statements read aloud from two of her children — her eldest son Jake is now 12 years old and daughter Jacquelin is 10. Judge Bowman said their words were “heartbreaking.” The son declared that his mother had destroyed their lives and “now she is trying to weasel out of the punishment” and “she should serve out her time with no shortcuts.”

Daughter Jacquelin declared: “I want to say that I no longer have a mother…. She was so self-centered and selfish…. Because you killed our Dad, you are no longer Mom…. I will never call you Mom again…. You made my brothers and me orphans…. I cannot believe all the lies you said in court about our Dad…. You betrayed him in the worst way.”

The children of Jason and Julie Harper are being raised by Jason’s parents.

Claimed she buried murder weapon to save it for evidence

Judge Bowman slammed Julie Harper’s trial testimony, saying she lacked credibility and was “inherently untrustworthy” and “not worthy of belief.” He referred to specific statements Julie had made in the witness box, including her claim that she buried the murder weapon out on a street to save it for evidence later, and her declaration that she fired her pistol accidentally. The judge pointed out that the jury specifically determined that Julie intentionally fired a handgun in the commission of her crime. 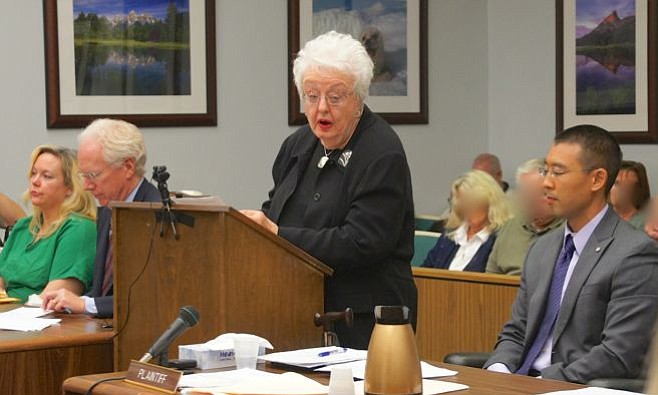 Jason Harper’s mother, Lina, spoke to the court, saying, “Julie Harper is a selfish, arrogant and vile person.” She stated that Julie’s children are now afraid of her, and they awake from nightmares of being abducted. “These children need to be safe from their own mother.”

Julie Harper, seated at the defendant’s table, began to cry when her mother-in-law described her children’s fear.

Jason Harper’s brother declared: “No more surf sessions, swimming with the kids,” and “I lost my only brother.” Cousin Barbara, who was the same age as Jason and felt particularly close to him, told the court: “I only met Julie Harper three times; each time she was intoxicated and drew attention away from the event towards herself.” Barbara stated that before the shooting, her opinion of Julie was that she was obnoxious and selfish but not dangerous. This cousin was particularly concerned that Julie’s claims of abuse are recorded and preserved in the media and so her children will always be able to find those ugly assertions.

When Julie Harper got her chance to speak to the court, she turned red and was crying almost continuously for 40 minutes.

“Some day they may want to come to me”

In her long ramble she declared, “My husband was a different man behind closed doors.” After she repeated many of her claims against her husband, Julie Harper explained that the reason she covered her husband with trash, as he lay dying on the floor of their master bedroom, was to spare her children the pain of seeing him. She informed the court that she will be writing letters to the same children who currently disavow her, because, “Even if they don’t want me in their life now, some day they may want to come to me, for answers.” Julie Harper said her letters will be given to her offspring when they are 18. 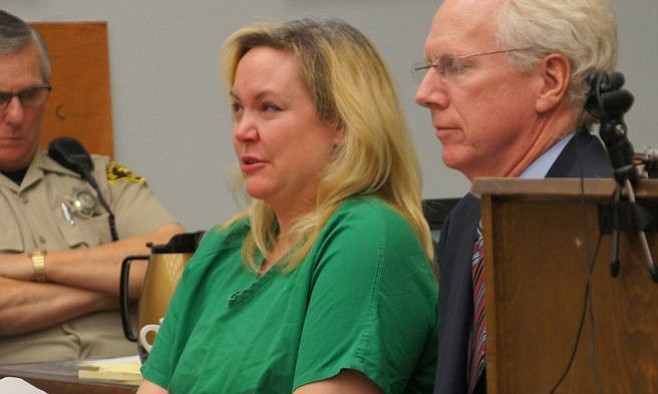 Julie Harper cried during her 40-minute declaration to the court.

Julie revealed that the day after the shooting, when she surrendered to authorities on advice of her attorney, she expected to be out on bail in two days. She was bitter that she actually spent more than 400 days in Las Colinas women’s jail, because ”the district attorney asked for exorbitant bail.” Prosecutor Keith Watanabe looked impassively at Julie Harper as she spoke.

Julie Harper was taken back into custody immediately upon her conviction, and has 503 days in custody so far.

The convicted killer was unhappy that her 15-year-to-life sentence for second-degree murder was enhanced with an additional 25 years because she intentionally fired a handgun in commission of the crime, per California state law. Julie Harper bemoaned that a killer who used a blunt object or knife to commit the same murder would get fewer years. She pointed out that she only used “one bullet.”

Julie Harper begged the judge for “mercy.” She said “it would not serve any purpose for me to just die in prison…. we are supposed to be a society of rehabilitation…. This is supposed to be the greatest justice system in the world.” She pointed out that Pope Francis has declared this the Year of Mercy. 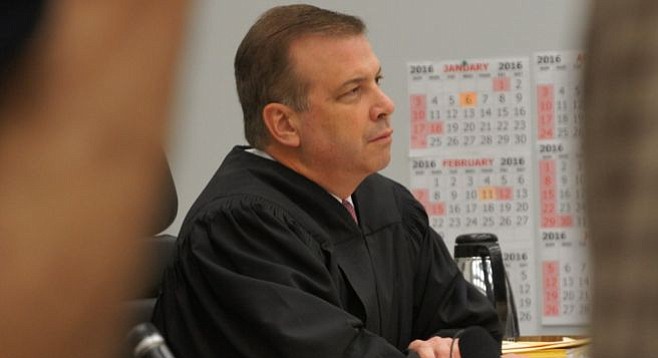 Defense attorney Paul Pfingst argued that the shooting happened in the heat of passion, during a violent argument, and so asked for either a new trial or a reduction of the second-degree murder conviction to manslaughter. These requests were declined. Judge Bowman commented that an average spouse would not shoot the other simply over a heated argument “or we would have a lot more killings.”

Judge Bowman told Julie Harper, “You have to understand that your husband got the death sentence.”

Paul Pfingst stated that his client Julie Harper would sign the papers to begin her appeal before she left the courtroom this morning, January 15, 2016.

I'm pretty sure she doesn't go to Chino. The women's slammer is at Chowchilla, unless I'm mistaken.

You're correct. I was thinking Chowchilla, but didn't look it up and thought Chino. I wonder how she will fit it there with the other gals.

Bad strategy to not take responsibility and say she's sorry.

She almost got away with it. The first stupid jury bought her nonsense. Phingst lost another one but was well paid. May she rot in hell.

Any news regarding her latest child? Who will have custody/raise that one?

OMG eastlaker, channel10.com says her dad has the in-vitro baby she hopes to use as leverage in an appeal.

I wonder what happened to medical ethics to allow that? I hope there is some investigation on that front.

This outcome was one I never expected. That judge, who was hard on her at sentencing, seemed intent upon tilting the case so far in favor of the defense that conviction would have been impossible, did the right thing, finally.

Pfingsto will handle an appeal; they always appeal a sentence like that one. But most of those appeals don't go anywhere. It doesn't appear as if he tried to get the judge to throw it out and retry it again on the basis on trial errors. (That's the sort of issue that got Tuite sprung from his conviction. Now he's on the loose because the retrial acquitted him.) Anyone following my earlier comments knows that I didn't trust Bowman at all. I still really wonder about his pretrial rulings. Or did he have a change of heart?

Anyway, there is some justice some of the time. This was one of those times.

On February 3, convicted murderer Julie Harper arrived at the Central California Women's Facility in Chowchilla. This prison is about 350 miles from the courtroom where she heard her sentence, two weeks prior to her move from local jail. Julie Harper is now 42 years old.