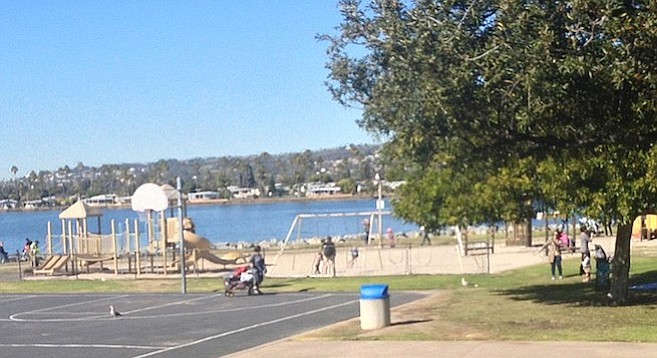 Arian Collins, a supervising public information officer for the city's public utilities department, told me yesterday (January 14) that the point of origin of the spill was in Tecolote Canyon, just below the end of Mt. Ashmun Drive in Clairemont.

"The break on the sewer main was caused by damage to the pipeline following severe erosion to the canyon due to the recent rainstorms," said Collins. "Staff is still investigating the start time. The spill ended at 6 p.m. when city public utilities department crews started bypass pumping. The City’s preliminary report to the San Diego Regional Water Board indicates a volume of 108,000 gallons. However, this report is only preliminary pending completion of the investigation, which is expected sometime next week."

Collins said that the spill was ultimately stopped by installing a temporary bypass pump. "Public utilities crews are currently working on repairs to the sewer main, which may take between two to three weeks to complete assuming the weather cooperates," said Collins. "City park rangers have closed off the walking trail in the section where the repair work is being done and warning signs have been posted along the trail about the trail closure. In addition, 80 warning signs have been posted around Mission Bay."

Regarding replacement plans, there is a capital improvement program project planned for the Tecolote trunk sewer. It’s currently in the design phase. Construction is currently scheduled to begin in summer 2018 with plans to be completed in late 2020.

According to Collins, the section of sewer line that ruptured is 60 years old and is on a 36-month cleaning frequency schedule. The last time it was cleaned was on September 8, 2014. 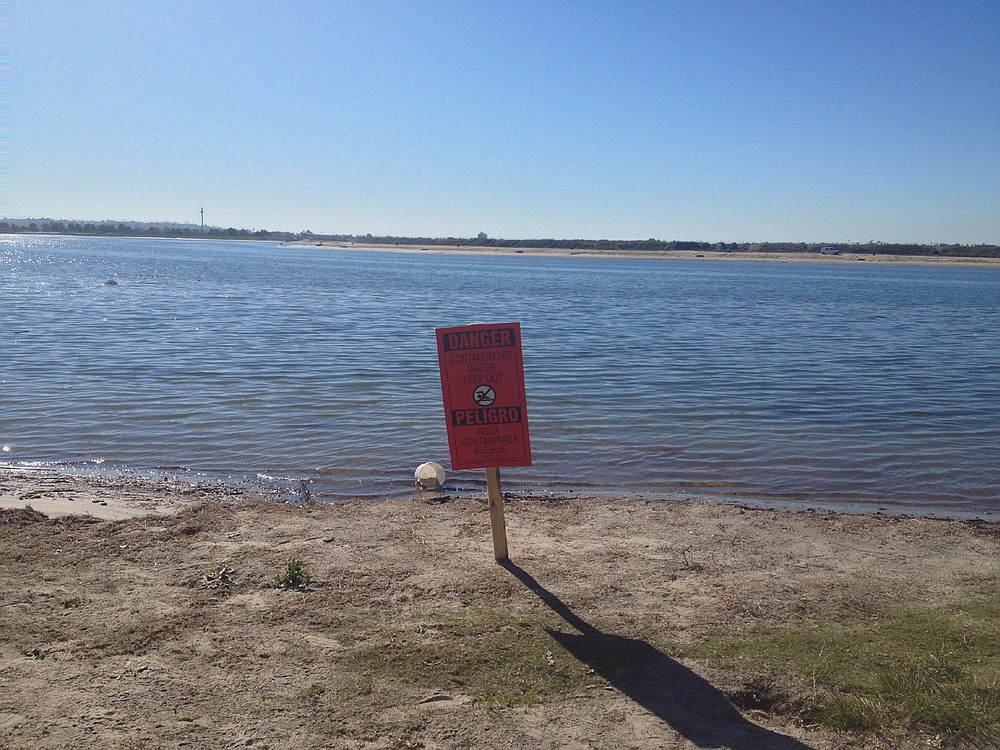 At least 15 people at the park were within 20 feet of this sign and didn't know about the sewage spill. 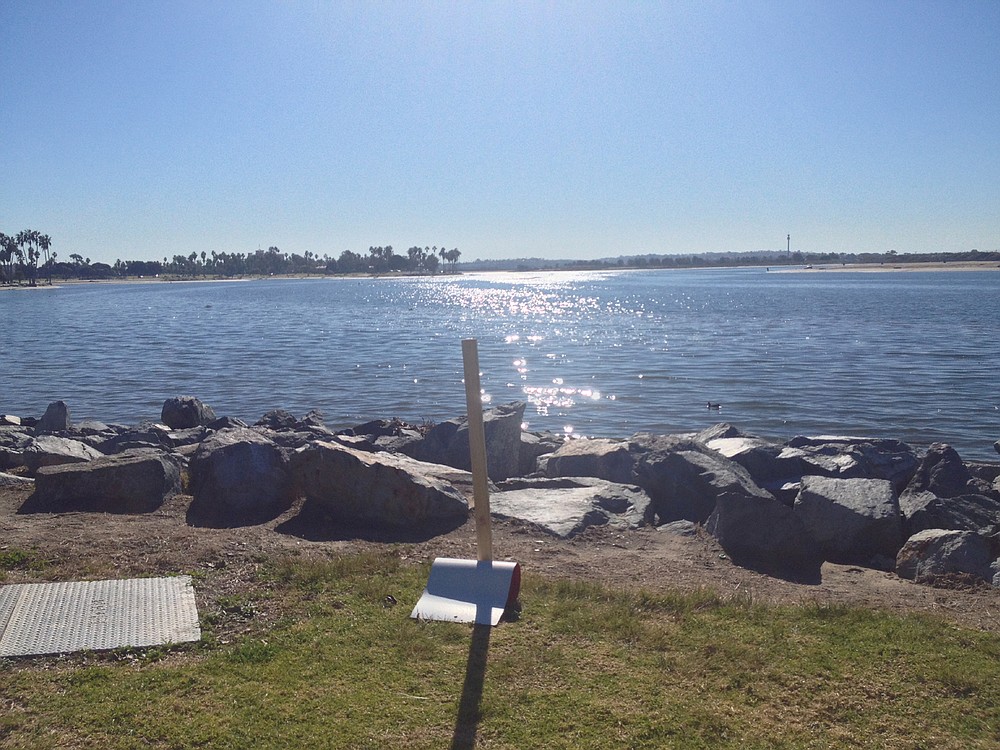 On January 12, at the park's former visitor center, there were children on the adjacent playground, cyclists on the pathways, and baby strollers rolling past ducks, seagulls, and rowers in the contaminated water. After surveying 30 people about the water contamination, I finally discovered an elderly gentleman that knew about it. No one else had a clue, and half of them were within 20 feet of a warning sign. I had to hunt for the signs myself. I finally found four along the water's edge. One was face down on the grass. The majority have a dark red background with black lettering that is difficult to read from afar.

On January 13, Alex Bell, a communications officer from the county's environmental health department, discussed what's involved in the sewage cleanup. "Samples are being collected daily in Mission Bay and Tecolote Creek by the city and county," said Bell. "Samples are being analyzed by the city's wastewater laboratory for total coliform, fecal coliform, and enterococcus, which are indicators of sewage impacts."

Bell said that more than 45 samples have been collected as of January 13. The sampling thus far has detected sewage impacts in the eastern portion of Mission Bay from the former visitors center at Clairemont Drive to the Fiesta Island land bridge. 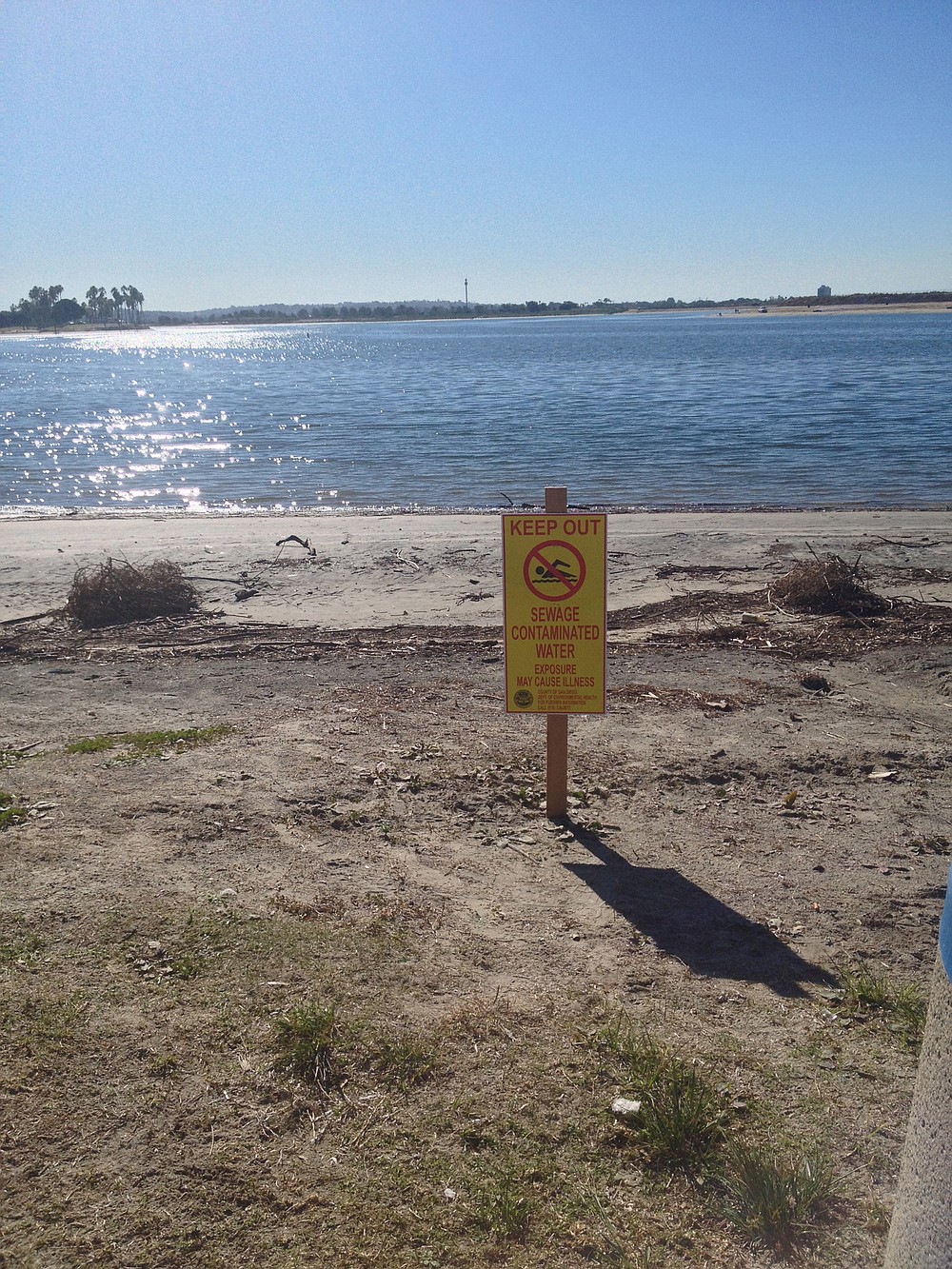 "As a result this entire area is closed to water contact, including Enchanted Cove which is on the east side of Fiesta Island. The western side of Fiesta Island is not affected," said Bell. "Signs warning the public of sewage contaminated water are posted on the eastern portion of Mission Bay in the closure area. Signage is posted most heavily at access points near parking areas and playgrounds."

In regards to the ducks and seagulls, Bell said, "Generally speaking, animals are not affected by the same pathogens as humans. As a result, wildlife is not expected to be significantly impacted by the sewage spill."

Surprisingly, the cleanup may not take as long as one would think. Bell said, "Cleanup of sewage impacts in water is generally accomplished through natural processes. These processes act to inactivate (i.e. kill) pathogenic bacteria and include predation (being eaten by other organisms), ultraviolet light (sunlight), exposure to seawater (saltwater) or other environmental stressors, and dilution. These processes are both effective and relatively quick but depend heavily on specific circumstances. Natural processes may mitigate this spill in as little as a couple weeks, but only sampling can confirm that."

Collins said that the cleanup depends heavily on the amount of runoff still coming down the creek. Collins said, "The storm runoff itself is high in bacteria levels even without the sewage spill, and this may be a factor in keeping the signs up around Mission Bay."