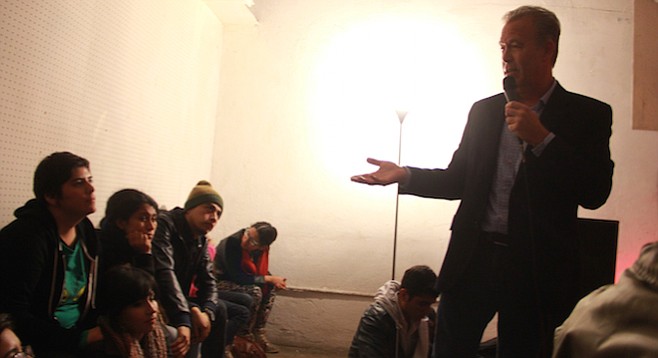 This month, an unprecedented race for mayor of Tijuana and district representatives will commence. An amendment made to the Mexican constitution in 2012 opened the door for independent candidates to seek office in 2016. Beginning on December 28, independent mayoral candidates had 20 days to register and 43 days to acquire at least 2.5 percent of registered voters’ signatures before they appear on the June ballot.

There are four tijuanenses who want to govern the city in 2016: Carolina Aubanel, director of Sintesis TV, is known as the lead advocate of the controversial project Zocalo 11 de Julio, which some argue is a private shopping mall on public land.

Another candidate is Gastón Luken Garza, who in 2009 was elected as the “citizen candidate” to represent the Partido Acción Nacional party in Baja. (This model of participation is the precursor to the independent candidate opportunity that now allows candidates without any party affiliations to run for office.)

Luken’s support is from a citizens’ platform called Republica de Baja California (RBC), a group that a few years ago appeared in social media as a response to the inefficacy of the national government to promote economic development in Baja California. When the feds raised the state tax in Baja to the same rate as in the rest of the country, RBC became the platform for the promotion of fair economic autonomy as it relates to the state’s border trade.

Cesar Faz and Juan Carlos Reyna are the founders of RBC. They have supported activities in favor of distinguishing the cultural differences between Tijuana and Baja California. They have been able to get support from friends from the local academic and cultural community.

According to Faz, “We formed a team in which people like Gastón, Juan Carlos, myself, and others can work with themes of convergence, without the prior agendas controlled by the heads of the political parties.”

On the evening of December 23, RBC held its first posada in Pasaje Rodríguez on Avenida Revolución. After years of neglect, the pasajes have recently seen the openings of galleries, cafés, bookstores, and other businesses.

The posada was organized in the space William Clauson, the 1970s Swedish singing cowboy, used to call home. The ambiance felt like a town-hall meeting combined with a TJ beer-fest and music rave.

Faz and Reyna opened the event with a short biography of RBC and eventually passed the microphone to Pedro Cruz Camarena, who wants to run as an independent for a district position representing the coastal community of Playas de Tijuana.

Camarena, once a pilot in the Mexican air force, is now retired from the military and is the director of Fundación Castro Limón, a nonprofit organization that funds cancer treatments for children. He told the crowd his experience during a military intelligence mission to infiltrate the Zapatista insurgency was where he became interested in their plight. He claims it was a life-changing experience that made him sympathize with the movement. He subsequently decided to pursue a master’s degree in political science and participate in politics and citizen empowerment.

Luken wants to be the next mayor of Tijuana. He stated to the crowd that one of his priorities would be to support a mass-transit system and dissolve the transport mafias, a task that until now no mayor has been able to accomplish. He invited everyone to get involved in the political life of the city because he believes “Politics is a noble cause, yet most politicians are not! This sentiment has caused the population to be skeptical about the system.”

The last speaker during the posada was Ignacio Anaya “Nacho” Barriguete, a young lawyer who claims to be the first tijuanense to climb the summit of Mount Everest. He said he lost two toes but donated a peso for every meter he climbed for children with cancer. He is now a university professor and wants to run as an independent to represent district 08. This district is the most diverse in the city and includes middle class to working class communities where a high voter turnout is expected.

After the talks and a short Q&A session, aspiring candidates and their supporters mingled in Pasaje Rodriguéz to drink beer, listen to music, and think about the new era in Tijuana politics that lies ahead.