No trailblazers wanted in Parry Grove

A quiet walk in lush chaparral, with Torrey pines and spectacular ocean views 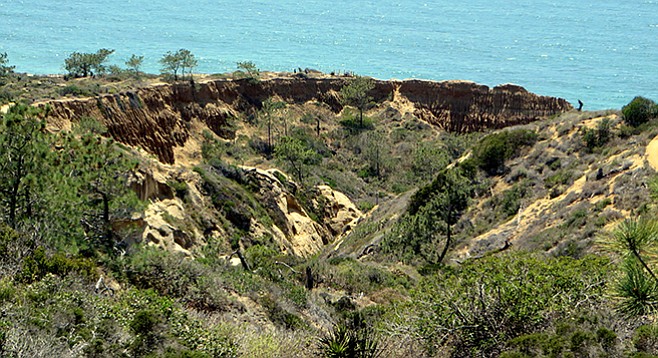 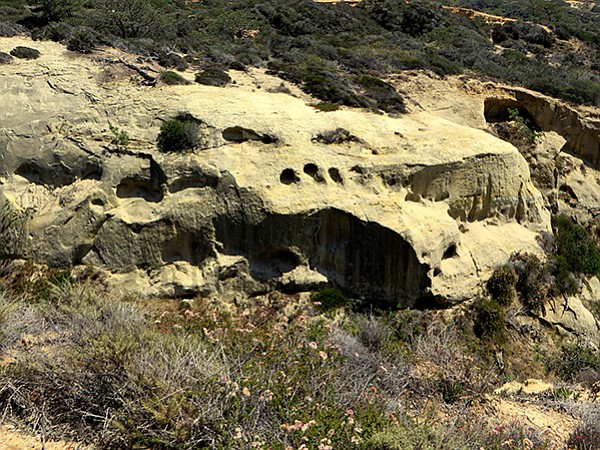 Evidence of water and wind erosion

The trail begins just north of the Torrey Pines Lodge Visitor Center at the top of the hill with a walk through Whitaker Native Plant Garden, named for Thomas W. Whitaker, a plant scientist and longtime president of Torrey Pines Association. Follow the level trail out to the viewpoint that looks out over the original portion of the park, where steep canyons eroded by water and wind and La Jolla Cove are visible on clear days. 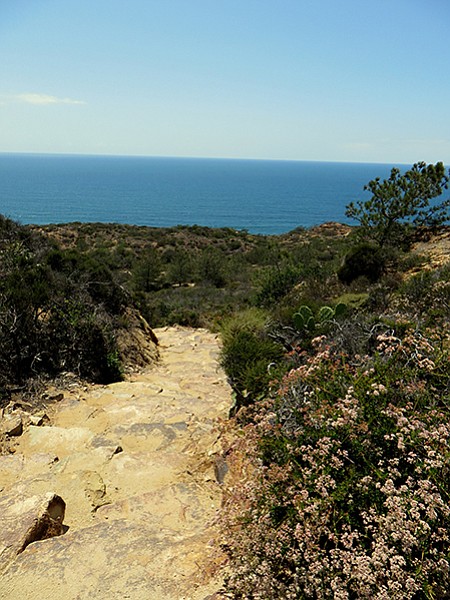 Backtrack a bit and descend the steep stone stairs to a sheltered bowl that once was home to the reserve’s largest stand of Torrey pines (Pinus Torreyana). This was one of the original trails in the park, with a level loop meandering through dense chaparral and abundant blooms that include sea dahlia, wild hyacinth, Nuttall’s snapdragon, Mexican pinks, and butterweed (groundsel) during spring.

The native Kumeyaay lived here and throughout coastal and interior San Diego County and northern Baja California. Spanish explorers used the Punta de los Arboles (“point of trees”) as a navigation landmark. In 1850, botanist Charles C. Parry described the pines and named it for his mentor, John Torrey.

These rare trees, perhaps the remnants of a wider range long ago, occur naturally in Del Mar and on Santa Rosa Island off of Santa Barbara. On seaside bluffs, the trees are low and twisted, but in sheltered areas they can grow up to 70 feet tall. Torrey pines have multiple major branches and 9- to 11-inch needles in bundles of five. To capture every drop of moisture, the serrated needles allow the trees to collect fog drip. Roots can be up to 150 feet deep. The large cones take three years to mature (compared to two for most pines) and stay on the tree for five years or more. 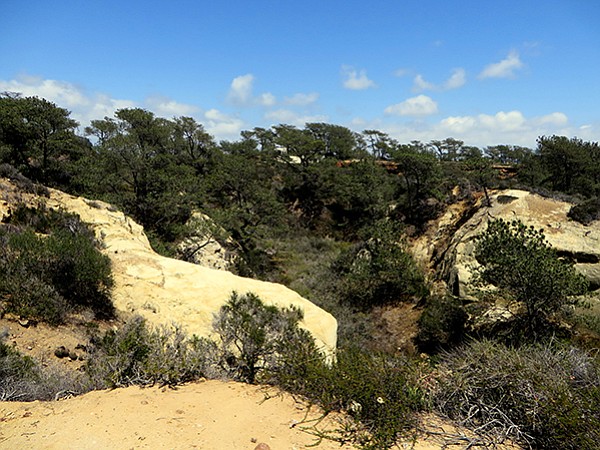 In 1883, Parry returned to San Diego and raised public concern about damage to the trees by picnickers, campers, and grazing cattle. In 1899, the City of San Diego set aside over 300 acres for a park, and Ellen Browning Scripps, a newspaperwoman and philanthropist, donated land comprising the North and Parry Groves. Over the next two decades, she purchased adjoining parcels, and in 1959 it became part of the California State Parks system to better protect the trees. To be designated a State Natural Reserve, the area must have outstanding or unusual natural or scenic values.

During a drought and severe bark-beetle infestation in the 1980s, hundreds of pines in Parry Grove died, and their skeletons can still be seen. With adequate rain, the trees can produce enough pitch to withstand the insects, but in times of warmer temperatures and drought, beetles proliferate. The local culprits are called the five-spined engraver beetle and the red turpentine beetle. They burrow into the cambium of the trees and eventually kill them. The females secrete chemicals called pheromones that attract mates. The long hanging black tubes seen throughout the reserve are pheromone traps for bark beetles. Many of the young trees planted to restore the grove are struggling in the current drought. Last year, park staff identified about 100 trees that were dead or dying from beetle infestation.

The habitat is fragile, and the reserve is in danger of being loved to death, so avoid the temptation to blaze your own way through the underbrush. Stay on the trails and help preserve this lovely place for future generations.

Distance from downtown San Diego: 22 miles. Allow about 35 minutes driving time (Del Mar). From I-5 N exit on Carmel Valley Rd. and turn left (west). From Carmel Valley Rd., turn left (south) on So. Camino Del Mar, which becomes N. Torrey Pines Rd. as you cross into La Jolla. Drive 0.7 mile to the park entrance to pay a day-use fee. The visitor center parking area is about 1.5 miles up the Torrey Pines Park Rd. Free parking, if available, is by the beach on N. Torrey Pines Road. 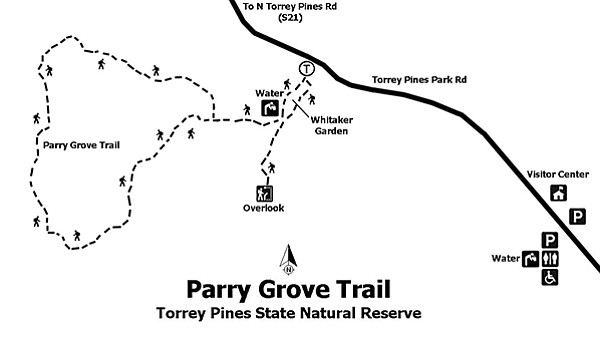 Difficulty: Moderate, due to 118 steep stone steps, without railing. Elevation gain/loss 100 feet. Trail to the viewpoint through the plant garden is ADA compliant. Facilities. No food or dogs allowed. No trash cans: pack it in, pack it out.