How to fly the friendly skies

To Jerusalem, with politics 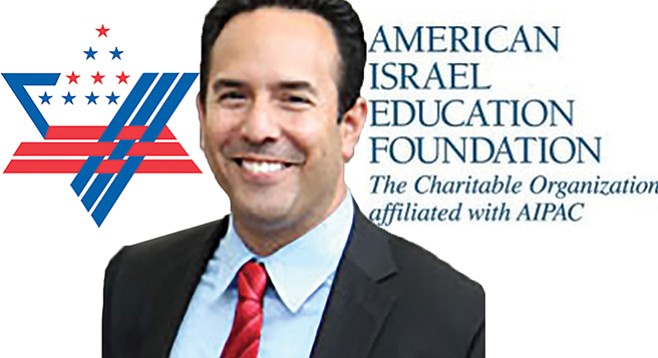 A staffer for Democrat Bob Filner when the fallen San Diego mayor was in Congress, Humberto Peraza, has been cleared to travel to Israel for free, courtesy of the American Israel Education Foundation, an affiliate of the American Israel Public Affairs Committee self-styled as “America’s pro-Israel lobby.” In addition, says a letter to Peraza from state Fair Political Practices Commission general counsel Hyla Wagner, there are no limits to the amount of the travel money he can receive from the group, since it is connected to “a legislative or governmental purpose and/or concern[s] international public policy.”

Once employed by Democratic assemblywoman Lorena Gonzalez, Peraza, a San Diego city hall lobbyist whose clients have included a group of medical marijuana enterprises, according to city disclosure documents, won election to the board of Southwestern College in 2012. “You have been invited to participate in an ‘Educational Seminar in Israel for Southern Pacific Latino Leaders,’” continues Wagner’s letter, “and you understand that the sponsorship covers the cost of transportation, lodging and meals during the seminar. You understand elected and appointed government officials will meet with current and former Israeli government officials, Palestinian Authority representatives, academics and journalists. You are informed and believe the seminar will be related to the purpose of exploring policy and security issues affecting both the United States and Israel.”

Peraza is not the only local politico to take one of the committee’s junkets. Others include Timothy Walsh, an aide to congressional border Democrat Juan Vargas, and Michelle Dorothy, chief of staff to La Jolla Democratic congressman Scott Peters, who headed out last February for a tour costing the foundation about $11,500 for each. That group’s stay in Jerusalem included dinner at Touro, “a Mediterranean kosher meat chef restaurant located in the heart of the picturesque Mishkanot Sha’ananim neighborhood” advertising “a breathtaking view of the Walls of Jerusalem and the Tower of David,” according to the website GoJerusalem.com. There they heard from Matti Friedman, a former Associated Press staffer who has harshly criticized what he says is biased coverage of the Jewish state.

Last fall, Peraza told the Southwestern College Sun that he would not seek re-election to the school’s governing board this year, saying, “I think we’ve had a really good run here, but I think it’s time to focus on my family, my kids, my wife.”

This is the same Humberto Peraza that stood at Bob Filner's side all those years the sexual assaults were going on? And never said or did anything about it?