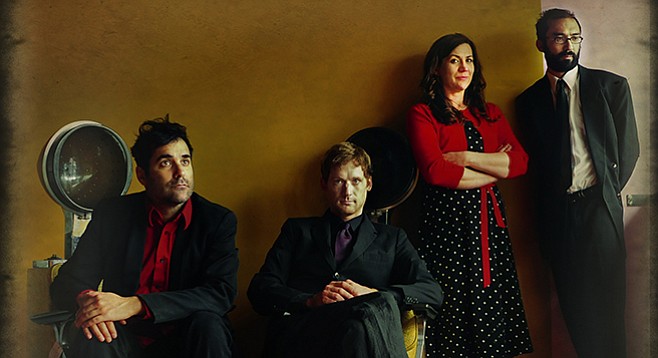 A band named “Girl”: at least that’s what the group’s members (none of whom are Russian, by the way) claim Devotchka stands for in that particular language. No, this is a four-piece based in Colorado, and between them they can play better than a dozen instruments — and they do so in the course of an evening. There’s a pretty broad range therein, anything and everything from theremin to sousaphone to bouzouki to glockenspiel, guitar, and double-bass come to mind, but there’s a lot more. Versatile is a word that many a rock critic has posted in attempts to try to describe this band, but it’s not just about versatility for the sake of it — no, Devotchka music has finally become its own odd universe.

"Till the End of Time"

By Devotchka, from the motion picture Little Miss Sunshine

For a time in their beginning years Devotchka was Dita Von Teese’s backup band, she being a burlesque/fetish/glamour model who gained infamy by marrying, then later divorcing, the musician known as Marilyn Manson. That’s how Devotchka broke out of obscurity, by backing a woman who was known for compressing her rib cage into a very small and painful corset. The band’s musical madness equaled Von Teese’s near-naked fleshy madness, but in the end, the crazed Devotchka performances gained a pint-size following that began to deepen when they got out on their own.

With tortured, plaintive moaning that passes for vocals, the edges of Devotchka’s musical frenzy are fenced in by the rock-steady beat of their drummer. Each of the musicians was classically trained, but what they create together is a mix-up of klezmer, surf, Balkan folk, tango, polka, mariachi, indie garage rock, a touch of psychedelia, and so on — yeah, it sounds a bit like world music, maybe, but it’s not for the typical world-music fan. I gather Devotchka could care less about keeping anything authentic. This goofball band is the weirdest, most rocking fun since the White Album.