"Obama put us in the toilet, and if Hillary’s elected, she’ll pull the handle." 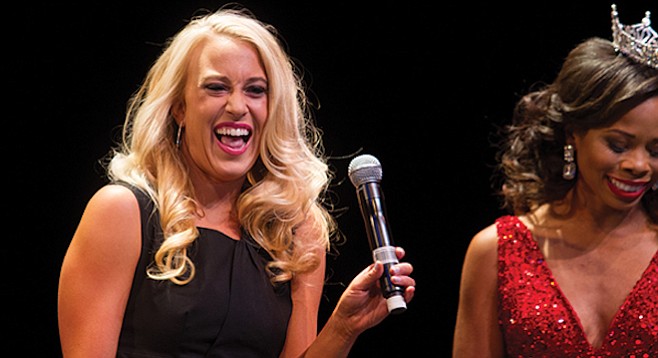 “Not Another Yoga Studio” contains inaccurate information. ECP Commercial has not been the leasing agent of this property for over a year, which is well before the incident that was reported in your paper.

We regret the error. — Editor 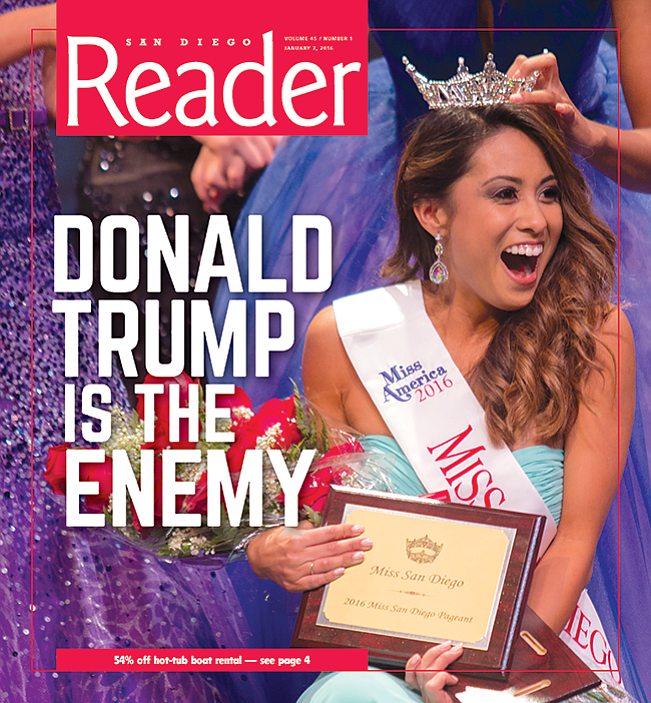 We get the Reader at our place of business, and I’m calling because we need to cancel — we’re not going to allow your publication in our business anymore. I wanted to call and let you know why.

You came out with “Donald Trump Is the Enemy” on your cover (January 7). I know this has to do with beauty pageants, but I also know that this is political season. It’s just political posturing, trying to propagate or destroy a candidate, whether it be Republican or Democrat, it doesn’t matter. I think this is the most unprofessional cover I’ve ever seen on any journalistic magazine.

In my opinion, this is unbelievable and extremely unprofessional. You’re trying to destroy a candidate simply because you don’t personally like him. Regardless of what you say, that is the truth.

I’m just looking at your cover (“Donald Trump Is the Enemy,” January 7). It’s so fucking inane. You’ve got, like, one sentence in the whole article about Trump. This is yellow journalism, man. This is the worst. I hope you hear about it from somebody besides me.

Maybe your paper will go downhill. I sure hope so. I think you guys need a Donald Trump enema.

You guys take one line from some lady who’s running a beauty pageant and says, “Donald Trump is the enemy.” That’s because he has another beauty pageant that she’s not associated with. How careless can you be to take those words and turn this stupid magazine that you make into a political thing?

Donald Trump is the enemy? No. He’s trying to do good for our country. That’s what’s wrong.

You guys are probably Democrats over there, and it ain’t gonna fly. You guys probably love Hillary, who got all those guys killed at Benghazi. She belongs in jail.

I think it’s absurd. I used to read your magazine all the time. It’s supposed to be full of local stuff and advertisements — a good thing. I love the covers. This is the only one that I’ve seen that was absurd. You guys should be ashamed of yourself. End of story.

Donald Trump’s the only one who has the mind to say what most Americans want to say. That’s what’s wrong with this country.

I’m a disabled veteran. I feel bad about what Hillary did. She got some of my veteran buddies killed. I hope you’re not voting for her because you’re gonna end up joining her in hell. Obama put us in the toilet, and if Hillary’s elected, she’ll pull the handle.

Pushed Around and Put Down

I just got your new Reader, and you guys have stooped to new lows with the beauty queen and the big headline. You have three sentences about Donald Trump being the enemy in a blatantly sexual, bogus article. Watch out. You guys are made out of paper; you’re not made of flesh and blood.

You’ve just pushed it over the edge. Your magazine is full of tits and ass, and you try to make up for it with a little bit of fishing and that shit. That ain’t gonna fly no more, okay? Political correctness is over; get used to it.

There’s no hostility here, either, because I love you guys. You’re San Diego — supposed to be, anyway. You just pushed me a little bit too far, so I had to call you up and give you a piece of my mind. I’ve got enough problems going on in my life to have to look at this shit.

Donald Trump is the enemy? You guys have a wake-up call coming when the American people wake up and get tired of getting pushed around and put down. You guys aren’t helping.

I love a few of the guys you’ve got — Don Bauder. Tell it like it is, man. Why do you have to go with this bullshit?

Tits and ass are good — I love tits and ass, y’know? I like marijuana too. Just cut out the political joke you’ve got going on. Just keep your eye on the pulse of the American people. It’s a strange road we’re all going down, but you guys don’t help by feeding the mass zeitgeist, as far as Donald Trump goes.

I’m calling about the gun buy-back program. What a load of manure.

That buy-back program is tantamount to elder abuse because the elderly don’t know what they have as far as collectible items. I’m sure they’re on a fixed income. They have a World War II collectible item worth $3000 and all they get is a skateboard?

If nobody’s there to tell them what they have and give them a fair amount, that’s B.S.

Looking for the Point

Re: “My Sister Is Gay,” December 31 feature story

So, it’s possible that the point of the article was buried so deeply in the text that, even after reading it twice, I missed it.

Was it necessary to tell us several times that the (author’s) friends are Asian? Is the author jealous of the sister’s marriage? Did the author have some great epiphany after she visited San Diego? Because it seems like the conclusion at the end was simply: Yep, gay marriage. Don’t agree. But at least I have Asian friends. 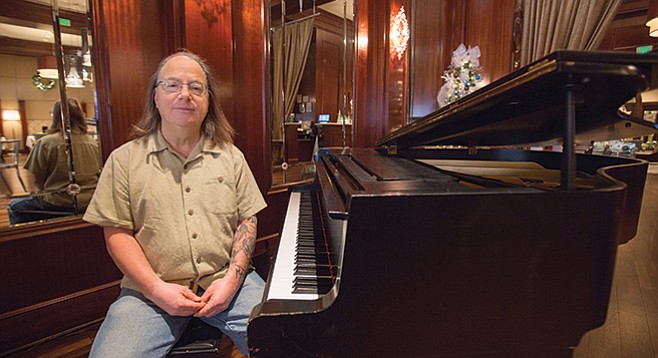 Put the Smart Phones Down

I’m calling to respond about “I Don’t Know Why I’m a Musician, Because I Don’t Really Care about Music” (December 24 feature story). I know it’s been a few weeks; I’m just catching up on my holiday reading. Anyway, I really enjoyed the article about Joe Garrison.

“The present day composer refuses to die.” That’s what Edgar Varèse said, and that’s what Frank Zappa said, who was a fan and a student of Varèse’s music. And that’s what I say.

Joe Garrison is very interesting. I hope that young people read the article and understand that they can put their smart phones down, pick up a pencil or pen and some sheet music, and begin to write. Just puts dots on a piece of paper. Maybe a rest here and there, a sharp or a flat here and there, and just see what happens. I think they might be amazed how smart a piece of paper is.

Anyway, thank you for a great article. It was written very well. And thank you, Joe Garrison, for keeping music alive. I don’t know why I’m a musician either. You just do it.

Obama saved us from another Great Depression and has accomplished much. Look at the facts and stay away from the right wing, Tin Foil Hat propaganda.