Before it was cool 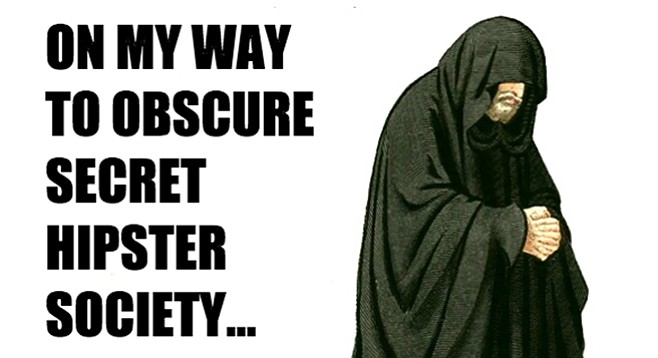 I grew up in North Park in the late ’70s, and I went to Alice Birney Elementary School. Since I lived in North Park before it was cool, does that make me an original hipster?

Phew. For a second, I misread that and thought you said, “The original hipster.” Obviously, that title is held by some obscure person you’ve never heard of before, and his (or her) identity must remain forever shrouded in the past, though I’ve heard that the ironic brothers of the Ancient and Honorable Order of Hipsters — a secretive order whose members identify each other through arcane codes embroidered in their shirt flannels — guard an effigy carved in the likeness of the First Hipster. I’m pretty sure the ironic brothers are just an old story used to scare little hipsters away from mainstream stuff.

Anyways, if you wish to proudly bear the hipster standard into battle against the onslaught of cheap American beer (not including PBR, natch) and Pharma Bros, we’ll have you. With everybody trying to prove how hipster she isn’t, it perks my hipster soul like a cup of single-origin cold brew to have you pledge allegiance to the hipster flag. You just better have been one super-cool elementary schooler.