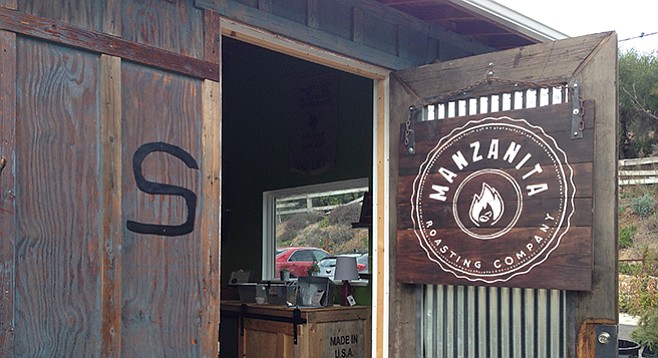 Manzanita Roasting Company opened in December, cooking single-origin beans on a 15-kg Loring roaster in North County. The couple behind the coffee wholesaler is relatively new to the business. Weston and Samantha Nawrocki initially met over social media, bonding over a shared interest in wine.

While Samantha’s a local, Weston hails from Vancouver, British Columbia, and their long-distance relationship began with a wine-tasting rendezvous in Paso Robles. But as the courtship went on, they found themselves meeting in ballyhooed coffee destinations such as Seattle, Portland, and San Francisco. Eventuallly they decided to get married and bring their appreciation for artisan beans to Samantha’s home town.

Unlike most of the third-wave roasters around the county, they haven’t opened in a hip neighborhood. Far from it, actually. Samantha’s family has owned Bernardo Winery for three generations, so Manzanita opened among the vineyard’s collection of vintage and gourmet shops in the hills along the eastern edge of Rancho Bernardo.

While Samantha points out that more young adults from North Park and downtown have embraced the winery as a getaway from the city in recent times, the 125-year-old vineyard doesn’t typically serve the same coffee-literate clientele that might visit specialty shops such as Coffee & Tea Collective on El Cajon Boulevard or James Coffee in Little Italy.

Consequently, as Manzanita’s fresh beans have appeared in the winery’s onsite café, V’s Coffee Shoppe, the Nawrockis have seen many visitors take notice. The couple says some residents of a retirement community near the winery have really taken to the quality of Manzanita’s Brazil-origin decaf. Meanwhile, some other neighbors, accustomed to the chain shops and restaurants prevalent in the area, have been experiencing fresh-roasted, artisan coffee for the first time.

Samantha likens it to eating fresh bread. “Do you want to put your bread in the freezer for six months and then eat it?” she asks, “Or would you rather go to the bakery and get your bread fresh?”

Weston describes an aha! moment, when the commodity coffee drinker discovers that “Coffee quality is more important than just caffeine.” Once that happens, he says, it’s tough to go back. He recalls experiencing something similar as a kid, trying Lindt chocolate for the first time after growing up eating Mars candy bars — “And never being able to go back to Mars bars again.”

Weston, a certified sommelier with a restaurant background, has reveled in applying his palate to cupping and roasting. He says he worked three months exploring the ins and outs of his new roaster before Manzanita opened, refining his approach to profiling beans. “It’s all about taste,” he says, “and with a wine and food background, I thought — well, I’m trained in taste, so I can do that.”