A chai tea should provide a cinnamon kick 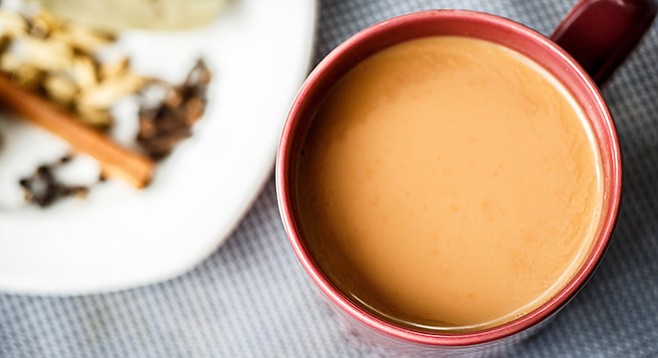 Chai tea is the beverage of choice for my teen son these days. The caffeine and sugar get the blood pumping and thoughts moving in his sleepy morning brain.

Last week he sat down with my hubby Patrick, who loves tea of all sorts, and they got to testing some chai-tea concentrates and mixes. A dirty chai dozen (plus two). The aroma in the kitchen was thick with spices.

The liquid concentrates were first up. The 32-ounce cartons, with the added milk, make a half-gallon of chai. “The lack of caffeine sort of takes the fun and practicality out of the chai,” admitted the son as he sipped the Oregon Chai Caffeine Free ($4.99 for 32 ounces at Albertsons). “Tastes like warm milk with a hint of spice,” added Patrick, “but it lacks the cinnamon kick.”

Its cousin, Oregon Chai Slightly Sweet, faired worse ($4.99 for 32 ounces at Albertsons). “Less sweet,” answered the sipping son, “but this is not a keeper, tastes watered down.”

Archer Farms Chai Latte Black Tea ($2.99 for 32 ounces at Target) made the previous two chai teas look anemic. “Sometimes cinnamon is all you get with the chai,” remarked Patrick, “but with this one you can taste and smell the black tea.”

“I’m really excited about this tea,” said the son, opening the Archer Farms Coconut Chai Black Tea Concentrate ($4.99 for 32 ounces at Target). “I like when they add coconut; it adds a new dimension to the flavor, and with this one I’m getting sweet coconut milk flavor at the beginning and a dry spice heat at the end.”

“Coconut smell brings me right back to the beach when I was a kid,” grimaced Patrick. “Smells like tanning oil. Yuck.”

“These differences are what make the world go round,” I threw out as I twisted open the next chai. 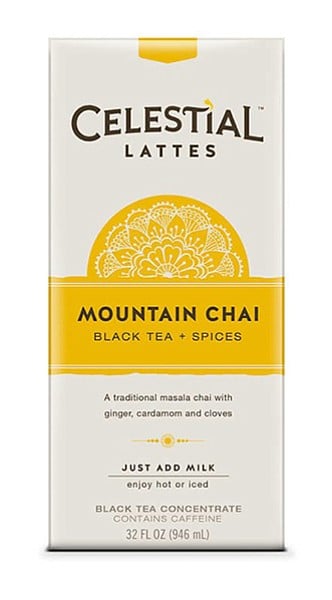 “Celestial Lattes Mountain Chai, which has cardamom,” I read ($4.99 for 32 ounces at Ralphs). “What’s cardamom again?”

“Cardamom is a seed and is one of the most expensive spices out there,” answered the all-knowing Patrick.

“I want to keep drinking this — I don’t want to pass this cup for you to taste,” said the son, sipping up the chai. “My only critique of this would be I wish the chai spice was stronger,” he added.

“I could go for 50 percent less sugar in it,” said Patrick.

Celestial Latte’s the Godfather is chai tea with espresso and cocoa ($3.99 for 32 ounces at Target).  “Tastes like bitter cocoa, then you get a bit of sugar and then the spice lingers. You smell the cocoa and the cinnamon but taste the chai tea.”

Sipping the Celestial Latte’s Dirty Chai ($3.99 for 32 ounces at Target) with espresso and chai, my son said, “I like the cut of the espresso with the chai and you can taste the cinnamon.”

“I don’t know,” said Patrick, “coffee and tea are like mortal enemies that shouldn’t be put together.”

“So many of these teas have been disappointing,” said Patrick, tasting the Tazo Chai Vanilla Caramel Latte ($4.49 for 32 ounces at Vons). “All the tea and spice flavors seem overwhelmed by the sweet milk,” said the son. “I think the proportions don’t do the chai justice.”

Its relative, Tazo Chai Chocolate Latte was another no-go ($4.49 for 32 ounces at Vons). “The aroma of the concentrate is clearing out my sinuses,” smiled Patrick, “but the taste reminds me of chocolate-flavored Tootsie Pops.”

Neither Trader Joe chai offerings passed the taste-testers’ approval, either. The Trader Joe’s Spicy Chai Tea Latte mix ($3.49 for 10 ounces) had “that mysterious spicy smell to it, but the taste is just too sweet,” noticed Patrick. 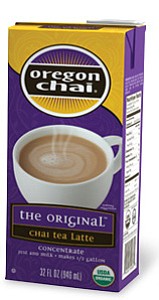 The last three tea mixes of the night were also the most expensive, all in the $6–$7 range. The Oregon Chai Original ($6.49 for 10 ounces at Albertsons) was placed in the serviceable pile. “This is the one you usually bring home, Mom,” noticed the son. “It has the texture and sweetness of powdered cocoa,” added Patrick.

The Pacific Chai Spice Chai Latte powdered mix ($6.21 for 10 ounces at Ralphs) was a keeper. “The strong clove flavor is kind of what I am going for when I drink a chai,” offered Patrick.

“I enjoy the hardy spice but I also enjoy the sweet cinnamon as well,” added the son.

The Pacific Chai Vanilla Chai Latte powdered mix ($6.29 for 10 ounces at Ralphs) rated even better in the keeper pile. “The temperature heat followed by the spice heat...I like it,” offered Patrick.