America’s Got Talent, but does San Diego?

Comedians, dog acts, dance troupes fall all over themselves 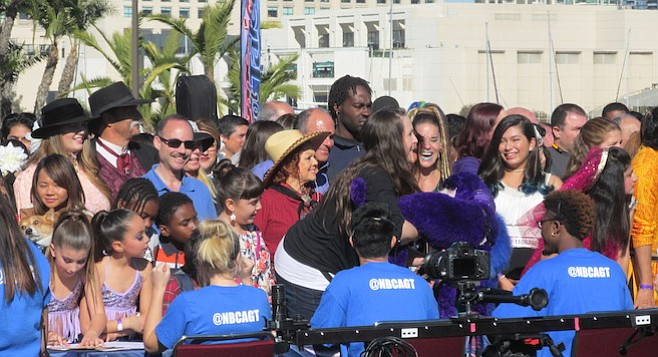 Felix the Fire Cat arrived at the San Diego Convention Center at 5:30 p.m. on January 11. When the doors opened early the next morning, he was #2 in line for the San Diego auditions for the NBC hit show, America’s Got Talent. 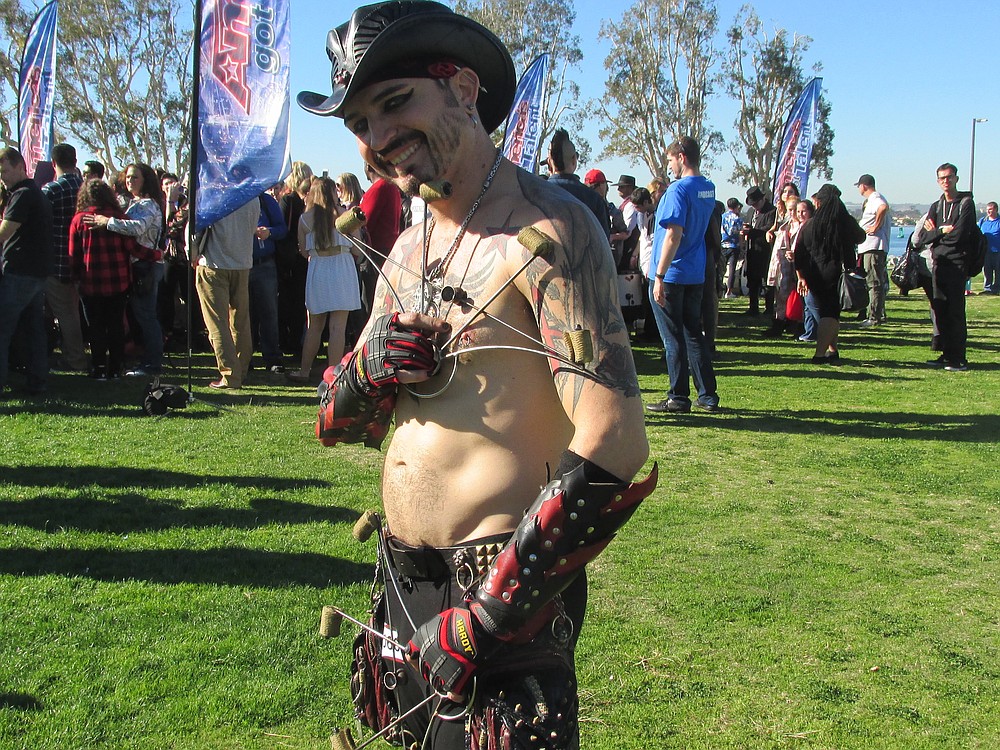 By 10 a.m. Felix had already had his audition in front of the producers. A street performer, Felix’s act includes juggling fire torches, and can be seen at the foot of Newport Street in OB every Wednesday and Sunday, right at sunset.

“I know they are going to put me through to round one,” said Felix confidently. “I’ve trained six and half years for today.” Round one will be the first time the four-judge celebrity panel will see the selected acts that made it through auditions, which were held in twelve cities. The judges will decide which acts make it into round two.

Taking advantage of the perfect San Diego day, the 200 registered contestants were taken out behind the convention center to Embarcadero Park, where camera crews got cover shots of the entire excited mob, from singers to comedians to dog acts to dance troops, all with the San Diego harbor and skyline as a backdrop.

The production manager for the audition said he expected hundreds more to arrive in the afternoon to audition. “It should only take about two of three hours to get through the [audition] line, once they register,” he said. 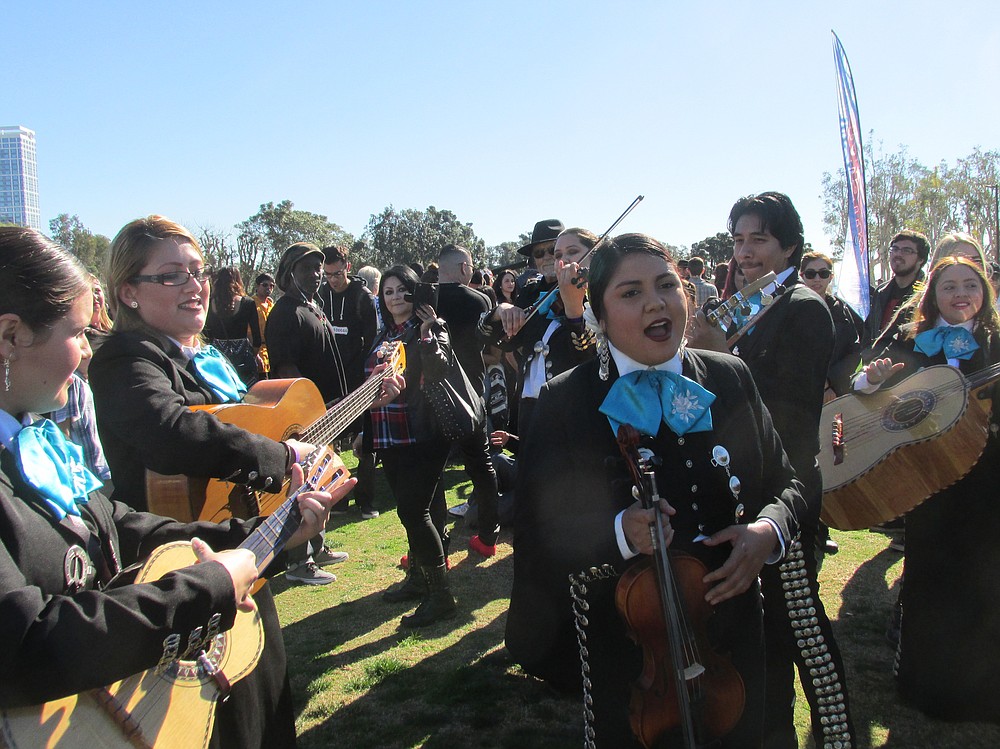 During the outdoor shoots, the eight-member, all-girl Mariachi Divinas, from South Bay, performed several songs for their fellow competitors. “We haven’t had our audition yet,” said the group’s music director David. So they thought they’d get a little practice in. The group performs at the Casa de Reyes restaurant in Old Town every weekend. 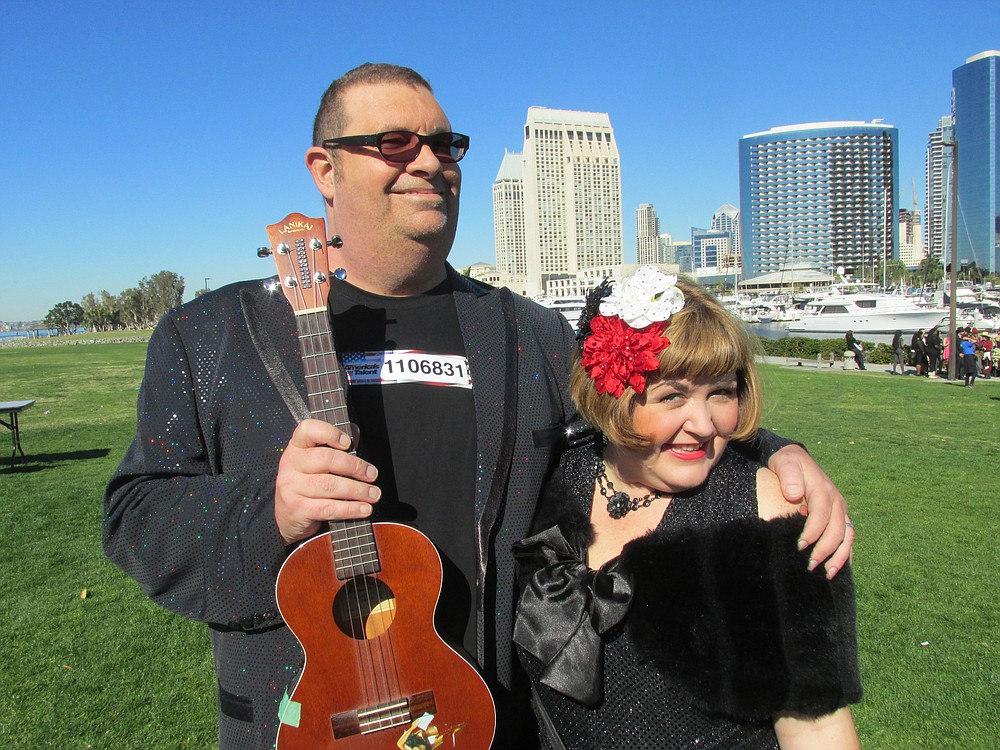 Joe and Jaye make up a “Vaudeville-inspired punk rock musical comedy” act known as Pony Death Ride. “We got a special pass,” said Jaye. “The producers called us before Christmas while we were touring. They said they saw our act and asked us to e-mail an audition, and then invited us here," said Joe.

“We filmed it in a crappy motel room in Yuma,” said Joe. Because of their special pass they didn’t have to wait in line and also got an on-camera interview.

For ten straight seasons, AGT as it is known, has been TV’s number one summer replacement series. Coincidentally, NBC announced the same day as the San Diego auditions that show host Nick Cannon, along with judges Heidi Klum, Howie Mandel, and Mel B will return for Season 11. One of the shows executive producers, cantankerous Simon Cowell, will replace former judge Howard Stern.

There’s no doubt the show has brought fame and fortune to past contestants. While the winner receives a one million dollar prize, even those that make it to the quarterfinals at Radio City Music Hall have received lucrative recording contacts and Las Vegas show deals.

San Diego’s Taylor Williamson, who started his comedy career just after graduating from Del Mar’s Torrey Pines High School, shot to a major headliner as runner up on AGT’s eighth season. Prior to his big break, Taylor, now 29, performed locally at coffee houses, pizza joints, and even in laundromats.