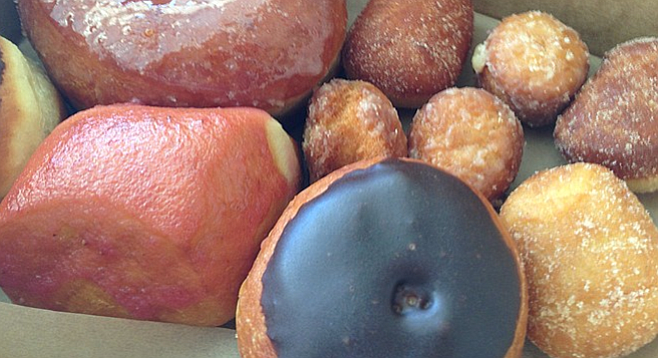 It’s easy to mock the emergence of the hipster donut shop. Donuts seem easy to make: raise some dough, deep fry, and sweeten it with glaze. Adding breakfast cereal, fruit slices, cured meats, or some twist on salted caramel may dress it up a bit, but is it really worth lining up for in the morning?

Still, I’ve got to give California donut makers some respect. For decades, America developed a taste for donuts made using trans fats in the form of partially hydrogenated oils. This kept liquid fats in a solid state so a donut could be made with flavorful fat content without oozing grease. Ironically, this resulted in the sort of light, fluffy, melt-in-your-mouth donuts that made Krispy Kreme a sensation.

California banned trans fats four years back, and the FDA is phasing them out nationally over the next three as the CDC attributes as many as 20 thousand heart attacks each year to trans fats in the American diet. With so grave a threat, fearful cops should have been shooting at unarmed donuts all this time.

Point is, these new-gen gourmet donut shops have had to find another way to compete with our memory of the delicious but deadly donuts of yore. Which brings me back to respecting the donut maker.

In the case of Devil’s Dozen, the recently opened annex of contemporary restaurant Kettner Exchange, respect should come easier. These donuts are the work of Kettner’s executive chef, Brian Redzikowski. If he’s going to take the time to develop a dough recipe amid preparing progressive American cuisine, the results should be worthwhile.

The small kitchen and counter takes and serves orders on the sidewalk in front of Kettner Exchange, while its bay-view rooftop patio sits opposite that of the main restaurant. Daily offerings are slim and simple: vanilla glaze, chocolate, and cinnamon-sugar donuts, old-fashioned (cake donuts), churro bites, and donut holes.

When I arrived at 11 a.m on a weekday, the shop was nearly sold out. The only full-size donuts left were a handful of the vanilla. I grabbed one of those and each of the cream-filleds on special: a berry glaze with lemon curd and chocolate glaze filled with caramel mousse. Each donut ran two or three bucks. For another two, I added handful of donut holes.

Redzikowski’s dough has great texture, remaining light enough to be considered fluffy, yet substantial enough to have a bit of satisfying chew to it. The creamy, caramel-mousse-filled made a mess of my beard when I bit into it, but the chocolate and caramel combo gave it a distinctive flavor beyond just sugary — my favorite of the day.

The vanilla and berry glazes likewise added dimension to the sweetness, and while a wider variety of toppings might be necessary to bring customers back in once they’ve gotten used to chocolate and vanilla, this donut shop favors great-tasting dough over gimmicky toppings. For that it’s worth standing in line a couple times at least.

Why can't we just let people who don't want to eat trans fats just not eat them? Why do we have to ban something for everyone? Government run amuck.