Growing pains in the South Bay 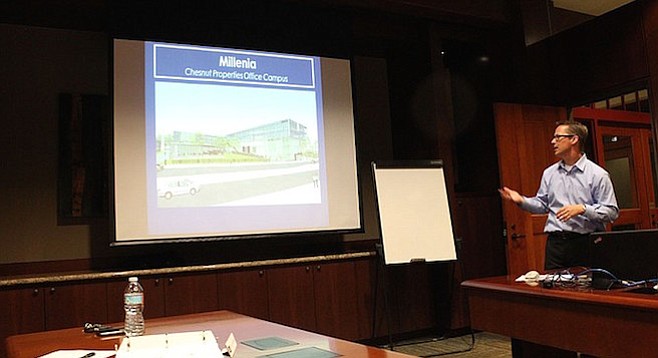 The City of Chula Vista needs $600 million for infrastructure repairs, according to a report presented by a city employee to the Growth Management Oversight Commission on February 18th inside City Hall.

Amanda Mills, the performance and organizational development manager for the city, explained that Chula Vista’s storm drains are over 50 years old, many of their fire trucks are over 30 years old, and parks have become worn, among other problems.

An Asset Management Program Advisory Committee worked with about 40 community groups to identify problems and solutions to Chula Vista’s infrastructure needs. The committee also created surveys that showed the largest concern among residents are the dilapidated conditions of streets that, if not replaced or repaired, may cause sinkholes, flooding, property damage, or injuries.

The city’s growth-management commission was requested to provide feedback. Created in 1987 to measure the city’s quality of life, the commission’s nine members represent the city’s four regions (northeast, northwest, southeast, northwest) and several areas of expertise (business, education, development, environment, and a representative from the planning commission). They meet from September to May and have already heard presentations about Chula Vista’s schools, libraries, air quality and police, among others. Each May they present an extensive report to the city council outlining the city’s needs.

At the February 18th meeting, Mills said the city was considering a November ballot measure of either a half-cent sales tax, which would bring in about $15 million per year, or a $200 million bond.

“With the bond measure, you could do a lot of the work up front,” Mills explained.

Bond money would come from property taxes. The half-cent sales tax, on the other hand, would be paid at the time of the sale of goods and would not apply to certain items, such as groceries and prescription medicines. According to a survey (done in English and Spanish, with about 880 participants), there was more support for the sales tax.

Chairwoman Amida Torres asked, “I’m a little confused as to how a sales-tax measure would really help because it’s $15 million a year on a $600 million problem.”

Torres then asked if the sales tax could be placed on the November ballot along with the bond measure. Mills said, “It’s hard. People are going to see it as a competing, not a companion measure.”

Torres commented, “What I’m hearing out in the community is that the city is crumbling around us. The streets specifically are what people see more than anything else. And, 'Why are you allowing more growth,' if we can’t maintain what we already have?”

Thereafter, Eric Crockett, director of economic development for the city, provided a presentation of the upcoming growth in eastern Chula Vista, which will include a new university, new retail centers, up to three hotels, and 350,000 square feet of office space.

Eastern Chula Vista, he explained, could become a strategic mega-region due to its location only four miles from the U.S.-Mexico border. “Of the housing, you’re seeing about 1000 units,” Crockett said.

The city is still asking for public input through an online survey.

Many of us already pay double the property taxes than the other homeowners in the form of the Mello-Roos tax. So the best way to tackle this is assessments of the property owners in the immediate vicinity of each individual infrastructure project.

Anyone who bought a home Mello-Roos tax was and is stupid.

While I suppose the numbers were "crunched" properly, it seems to me that the second-largest city in this county would net more than $15 million annually from an added half-cent of sales tax. But would a $200 billion bond really make adequate progress on a deficit that is three times that size? Oh, I know, once that bond money is spent, and there is still a long list of needs, they'll head back to the voters for another bond, and after that another one, and . . . Isn't that what Sweetwater UHSD managed to do with school bond money?

we can't even keep grocery stores open in this city. maybe instead of building on every bit of vacant land we should fix what we currently have. kinda hard for her to see the local problems when the mayor is jetting off to paris at our expense.

About twenty years ago I lived in Argentina, during one of their few successful economic periods, they had a very interesting method of taking care of their infrastructure, social and financial issues. First they had a problem with their military retirement funding, so they taxed gasoline.... then they had a problem paying for their roads so they taxed alcohol (booze).... then consumer goods with a VAT for schools.... nothing had proper linkage or reason for what they did and where is Argentina now, back to the good old 1960s and 70s.

Chula Vista and similarly San Diego have never been able to prioritize, allocate funding and plan a successful maintenance or attrition based programs. The reasons we have government, cities and social structure, is to supplying common services to the citizens of the community.

Chula Vista in particular has the dual taxation areas of Mello Roos in the east where those homeowners pay for "Open" ie public facilities and the west siders "only" (sarcasm) pay "Regular" property taxes.

My suggestion is the city scale back on the greenfield development in the east, (MORE is not always better) until the early issues in the east are solved, Public Swimming Pools, indoor gym space, traffic. In the older western sections create "special project or assessment districts" to assess and fund the repairs to sewers, water systems and roads.

Chula Vista City Council lift your head up and look around at what you have and need, in order to move the rest of the city into the 21st century instead of resting your laurels on how great (Not Very!!!!) you are doing developing the Eastern part of our city.

Maybe it's time to divide the city in half, how"s the City of "Otay Lake" sound to you??? BBQ

Elected city officials are only interested in progress, as in new roads, parks, homes and businesses and they ignore the roads, parks, homes and businesses that came before. The shiny new East side was all the City Fathers could think of and they ignored the older and gang infested slum areas of town. Now all of a sudden they realize that "old" CV needs attention? What a bunch of morons.