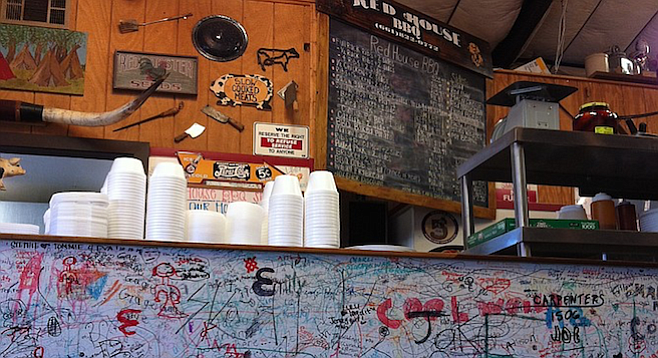 If you're like me, you dread driving through any part of Los Angeles when heading north by road.

Having driven different routes at varying times on several days of the week, I’ve found it will almost certainly be a pain. So, after multiple trips each year for more than a decade, by motorcycle and car, with lots of experiences (some good, some not so good), we’ve more or less settled on taking a rather round-about route to get to the other side, as I refer to the area north of the Grapevine.

Leaving San Diego, we head up the I-15, changing to the I-215 and rejoining the I-15 for the climb towards Victorville. With judicious timing, we normally miss the traffic congestion in San Bernardino and Riverside. After climbing the hill, we take California 395 north, subsequently turning west on California 58 to cross over the mountains and through Tehachapi down to California 99 at Bakersfield.

Yes, the scenery is far from beautiful along 395 and 58 prior to Tehachapi. But the ease of the drive, compared to I-5, I-210, etc., more than compensates. After passing Edwards Air Force Base, the road starts heading uphill towards Tehachapi, remarkable for the large number of wind turbines to the south, as they capture the prevalent winds to generate electricity. Once completing the climb, there's a flat, bowl-like area at the summit, and three turnoffs for Tehachapi.

It's about this time on the drive that we're ready for a pit stop, some food, and fuel.

When on the road, we eschew fast food and so-called popular restaurant chains, so I'm always on the lookout for unique places providing decent-to-great food at a good value.

On this cold December day, with a dusting of snow covering the hills and in shaded areas, we stopped in at Red House BBQ, about one and one-half miles off the 58.

Taking Exit 151, we turned west on East Tehachapi Boulevard and headed into the town proper. There isn’t much in this part of the town; you pass some auto repair shops before entering the edge of the town and encountering homes and businesses lining the main corridor. But after the dismal desolation of miles driving through the desert, the small-town setting in a natural bowl surrounded by tree- and wind turbine–lined hills is much welcomed. 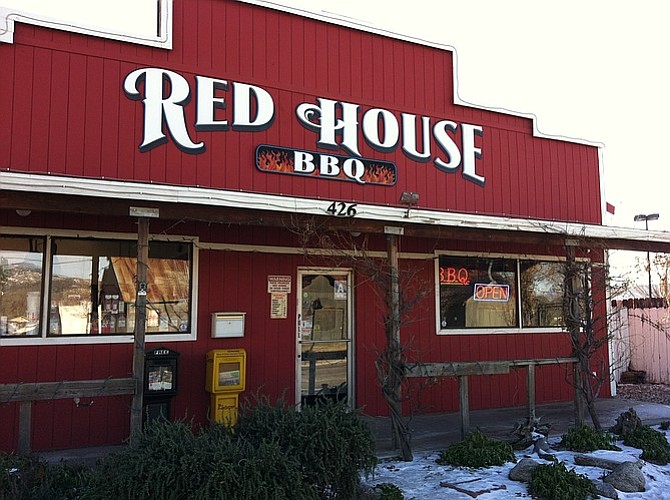 Snow lines the outside of Red House BBQ on a cold, sunny December day.

We discovered Red House BBQ on the left side of the road, just before the Village Grill. I've learned this from many cross-country drives and motorcycle road trips: if the parking lot of a diner or restaurant in a relatively remote area contains a fair number of pick-up trucks, it's likely to be worth checking out. On this afternoon, we added ours to the several pick-ups already in the lot. Stepping out of the truck, the winds were gusting and cold. No surprise – the large number of turbines wouldn't be there if wind wasn't prevalent.

Stepping through the door into the warmth, we were engulfed by inviting, mouth-watering aromas and the sound of blues music. A sign indicates it can seat 47 and by the looks of the crowded dining room, it is certainly popular. (Yep, those pick-up trucks in the parking lot were a good indicator!) For a bit I even thought we’d have to take the food to go or ask to share a table.

Hanging from the wall is their impressive chalkboard menu: ribs, chicken, pulled pork, brisket, cornbread, bean soup, catfish, shrimp tacos, even pecan pie. Ordering at the counter, I selected the pulled pork plate with spicy BBQ sauce and a side of mac and cheese, and my wife chose ribs with honey-mustard sauce and a side of red cabbage coleslaw. Looking around, the flags of the Armed Forces hanging from the ceiling and numerous pictures on one wall of U. S. Marines, old and young, leant a patriotic, small-town feel to the room.

Once seated, I looked around and took in the prominently displayed graffiti. The majority of it appeared to be from folks who simply signed their names, while others wrote of local high school football players and the like. 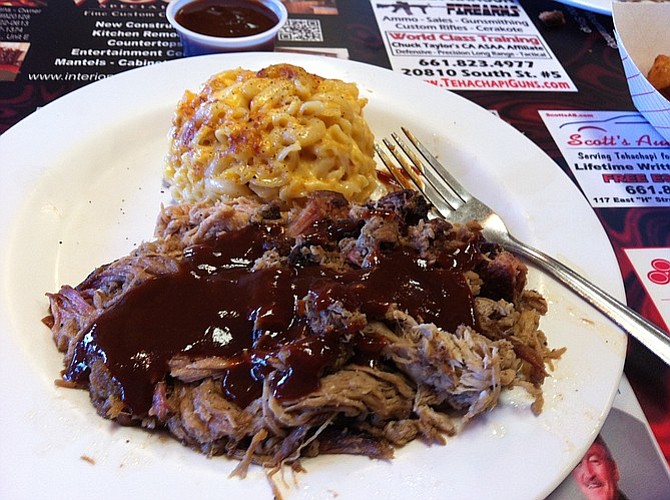 The pulled pork plate with a side of mac n' cheese.

In no time our meals arrived. The pork was tender and moist, well-complimented by the spicy sauce on the side that added the expected and appreciated tang. The pulling of the pork had left it in thin strips just right for dipping in the sauce. The mac and cheese, with a nice spicy hint to it, was a delicious balance to the meal. My wife really enjoyed the honey-mustard sauce on the ribs, and raved about the red cabbage coleslaw. Our conversation quickly ended as we dug into this comfort food, just perfect for a cold December afternoon. The portions were just right, the staff exceptionally friendly, the environment welcoming.

If you're smart enough to avoid the usual I-5 routing over the Grapevine by taking the 58 north through Tehachapi, Red House BBQ is a great place to grab a meal. I'll be certain to drop in again next time I'm on the road heading north.

Jay, you have an interesting way of bypassing LA. I know the big rig drivers use that route through Tehachapi, but I never thought of doing it myself. Generally, we don't want to head up or down I-5 north of LA. It's either the coast (101) or we just stay on 395 to points much farther north. One small correction: it's not "California 395" that splits off I-15 in Victorville, but US 395.

There is a downside to using that southern end of US 395, and that is the traffic on a two-lane highway north to Kramer Junction (formerly called "Four Corners") where it intersects California 58. That stretch of highway should have been upgraded decades ago in light of all the 18-wheeler traffic it carries in both directions. Every time we travel 395, I call it "forty miles of misery." But for so many of our trips, there's no avoiding it without a long detour.

As to the BBQ, it sounds great, and if I ever pass through Tehachapi--I actually don't think I've ever been through there--I'll look for it.