Dim sum is a big deal in China. Right? 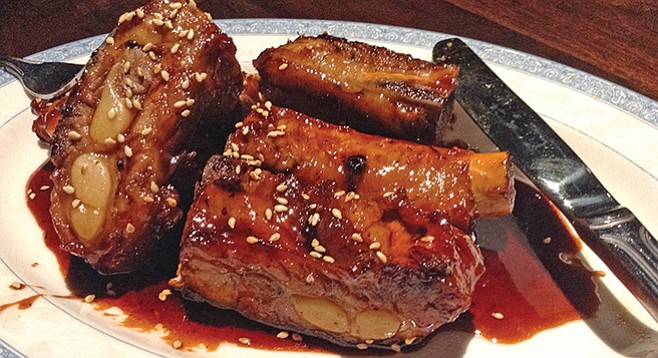 ’Tis the first night of New Year’s, and I’m on the prowl.

Chinese New Year, of course. Start of the Year of the Monkey. Tonight will be the first night of the year 4714. Awesome! Especially down here in ’Diego’s own Chinatown, maybe the least-known Chinatown in the world.

And here around Third and J, yes, lotsa wonderful Chinese-looking buildings. Chinese Historical Society. Chinese Benevolent Association. And the museum has this awesome oversized statue. Liu Bang, the first ruler to unite China. Museum says this emperor was a, uh, lowly patrol officer who fought his way to the top, 2500 years ago. You have to rub his lucky fingernail, the one that’s shiny with rubbing, if you want to have luck in this life.

I hurry east along J Street. The atmosphere’s right: white blossoms busting out on trees already, give it a real Chinese look. But my question is: where are all the Chinese eateries in this Chinatown?

Then, between Third and Fourth, a red lantern. Aha. A chalkboard reads “Happy New Year!”

“Any New Year’s specials?” I ask José, the guy behind the bar.

“Well, people go for dumplings and traditional dishes like kung pao,” he says.

Sigh. I was hoping they’d at least have some special dim sums. But I’m in like Flynn anyway. Chinese is Carla’s favorite cuisine. Got to take something back. 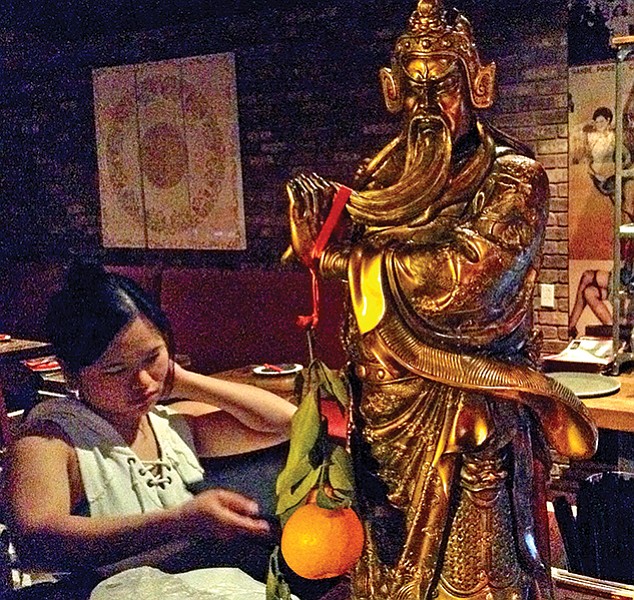 Inside Lucky Liu's, Confucius and a gift of an orange, a very auspicious Chinese New Year symbol of wealth, luck, and gold. Added significance: “Orange” in Chinese sounds like the Chinese word for “wealth.”

Inside’s nice and dark with interesting golden lighting under huge shades. Big round table at back has a lazy Susan so a group can play spin the dishes. A dangling dragon — or is it a lion? — glows with red eyes from one corner.

José comes around with a menu and some water. It’s all very, well, smart. Couple next door’s sharing some Mongolian beef ($13.95), and comparing their expense accounts. “My per diem here is $59,” says the gal. “In Europe, $120. Tells you everything.” I hold off on any big order, just to see how we go with these two. The soup is brilliant. For starters, the “cup” is really a bowl. With plenty in it. Minced pork, “Chinese wood ear” mushrooms, sticks of tofu, bamboo shoots, scallions, all in a chicken broth that’s beautifully tangy. It’s almost a meal. The $12 size would be, for sure.

The pork sui mai are fine, but in this match-up, the soup wins, hands down. I’ve never really got what the fuss is with wontons (translation, “swallowing a cloud”), dim sum (“touch the heart”), and dumplings. They’re nowhere near as interesting as even a decent fried rice (and they do have a fried rice here with chicken, beef, BBQ pork or vegetarian, plus scrambled egg, for $12.95). But, man, that soup. 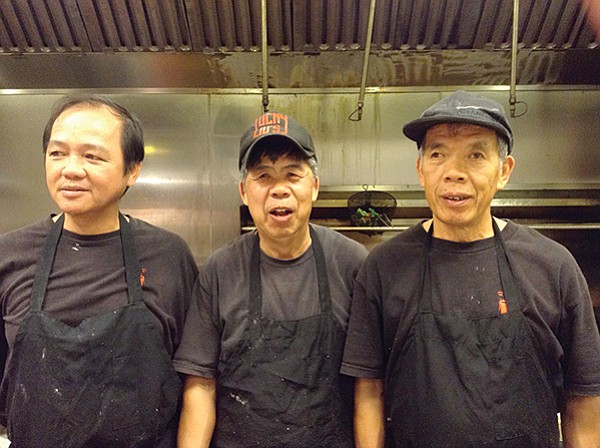 I pop back and tell the chefs about the soup. There’s three of them there, Dong Ha, Lee, and Wong. Lee seems to be the head chef. He speaks a tad of English. They’re all from the city of Guangzhou (once known as Canton), near Hong Kong.

We end up endlessly wishing each other Happy New Year. Lotsa laffs.

I leave $9.68 poorer (plus a couple of bucks’ tip), and feel I’ve gotten away with an expensive meal cheap.

But now it’s half an hour later and — jumpin’ Jehosaphat! Forgot to get something for Carla. I run all the way through the Gaslamp till I get to J and Third. They’re still open. Just. It’s a quarter of ten. Result — and these were José’s suggestions — chicken wings, and pork spare ribs. Only problem: $7.95 and $8.95. Suddenly I’m another Jackson lighter. Still, what price love? The ribs score real points. Not sure if it’s ginger, but there’s definitely something Chinese in the squelch. Also garlic. The BBQ sauce, hoisin-soy teriyaki combo plus the heat of the chili pepper hot sauce totally work with the sweetish taste on those tender chunks of mahogany-dark rib. And the wings, with the help of plum sauce and Chinese mustard, sing a beautiful melody, too.

But before I go, have to ask.

“Not totally sure,” says José, “but the owner was telling me about an ancient ruler, who was fair to the people, and brought luck to the kingdom.”

Wow. Could he be our guy? Liu Bang, the patrol officer who created China and became its first emperor?

That’s it. This is the auspicious first night of New Year’s. Now I have to go back to Liu Bang’s statue and say hi. And rub his lucky fingernail.