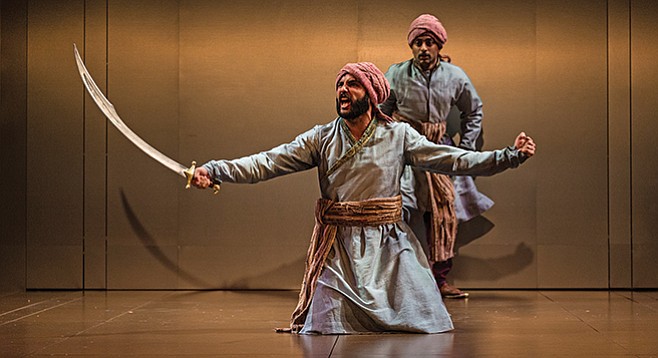 Humayun and Babur hold the lowest possible job in Agra, India: stand stone-still and guard an enormous, impregnable wall. Behind it is the “most beautiful thing ever seen.” In 1632, Mughal emperor Shah Jahan (“king of the world” in Persian) wanted to build an eternal tribute to his third and favorite wife, Mumtaz Mahal. She requested a “Crown Palace,” built in her honor, before she died giving birth to their 13th child.

Guards at the Taj

It is now 1648. In Rajiv Joseph’s obsidian-black comedy, Guards at the Taj, the Crown Palace has become the Taj Mahal, a white marble dome, four spikey minarets, and jewel-embedded walls that change colors with the changing light. The Taj is a poem in stone, on the bank of the Yamuna River. Reflective pools and a red, sandstone base make it seem to float like a cloud.

For 16 years, 20,000 designers, craftsmen, and laborers have built the Taj. The protective wall, so high no one can see the project, comes down at sunrise. Humayun and Babur have guarded it for years. They must stand at attention, a scimitar arching over the right shoulder, and face forward. They can never move or talk. The worst part of the lowliest job: they are the dawn patrol — as if someone would try to scale that impossible height in the dark! In effect, they’re just scenery. When the sun rises, alone in all of Agra, they must keep their backs to the Taj and not be among the first to witness the most beautiful object, the emperor swears, that will ever be.

They aren’t supposed to, but they do talk. To pass the time, Babur invents objects, like a flying litter that would lift them from their demeaning lives. Since the play is full of anachronisms and contemporary slang, he even envisions a seat belt, to keep passengers from falling.

Humayan just complains. His father, “the highest of high command in the All-on-High Imperial Guard,” says he’s “soft” and “yearns for my defeat.” Unlike Babur, Humayan lacks imagination. He just abides by the rules. In one of the play’s funniest sequences, he imagines a hole you can carry in a sack. That way, whenever you need a good hole, hey, you got one. But, asks Babur, wouldn’t the hole poke through the sack? Isn’t that what holes do? After an extended, “Who’s on first?” exchange about hole-ness, Humayan abandons inventing things.

Guards at the Taj, at the La Jolla Playhouse, is an 85-minute, two-character play. But there’s a third being, almost ever-present onstage. The emperor Shah Jahan has the powers of a deity. Like the Hindu goddess Kali, he can create and destroy. The least of his punishments: three days in jail for blasphemy. But that’s for offending a god. Offend him, or merely look askance, and he has a sliding scale of tortures, from mutilation to “death by elephant.”

Like the guards, we never see the Taj on Takeshi Kata’s thrust-stage set. There’s a silver wall, in the rear, with a stenciled outline of the Taj, and a square reflecting pool in the foreground. The rest is open space, but obviously not open enough to contain the ego, or the cruelty, of the emperor.

What starts out with softshoe-like bickering (from Waiting for Godot, or Rosencrantz and Guildenstern are Dead) becomes an unthinkable duty. When the emperor orders a horrific decree, the story nosedives into hell. The guards must obey or die (but the duty’s a logistical impossibility: how could only two people perform it physically, let alone emotionally?).

The decree is based on a long-held rumor about the emperor wanting the Taj to be a singularity — to remain the world’s most beautiful object forever. The Critic’s Code says no more information here. But in effect, Kata’s immaculate set and Joseph’s plucky, buddy comedy become a Grand Guignol bloodbath that Humayan and Babur must now clean up.

Guards recalls Tacitus’s Agricola, about having to live life under a tyrant (“so savage and hostile to merit was the age”). The difference: at Agra, neither Humayan nor Babur has any social status. They’re just statues. They begin the play thinking they’ve hit bottom. Then the bottom gives way.

Manu Narayan (Humayun) and Babak Tafit (Babur) create a deft, odd-couple pairing of lifelong friends and polar opposites: the brainwashed drone and the irrepressible dreamer. Their exchanges, even when the play bleeds them of their humanity, are crisp and sly and fully felt.

Guards has extreme highs and lows: the heights of beauty and creativity, the abyss of cruelty; a supremely powerful ruler, his lowliest subjects, romanticism and realism. There is no middle. The play and the Playhouse production fascinate. But loading Humayun and Babur with such symbolic weight not only goes hard against their lighter sides, it boggles credibility. The combination is flashy and raises intriguing questions about art and governance, but vaudeville and Grand Guignol are not an easy mix.

The Taj Mahal draws almost as many rumors as tourists. Contrary to the one Guards is based on — and disputing it, actually — people say Shah Jahan wanted to erect a companion structure, a black Taj Mahal, across the river. It would be his mausoleum and would mirror the original. A bridge would connect them. But he became ill, and when his son imprisoned him, the plan fell through. Some scholars — though not all — point to weathered black marble across the Yamuna as part of the foundation.

Guards at the Taj

Guards at the Taj, by Rajiv Joseph