Does Sober February have to end? 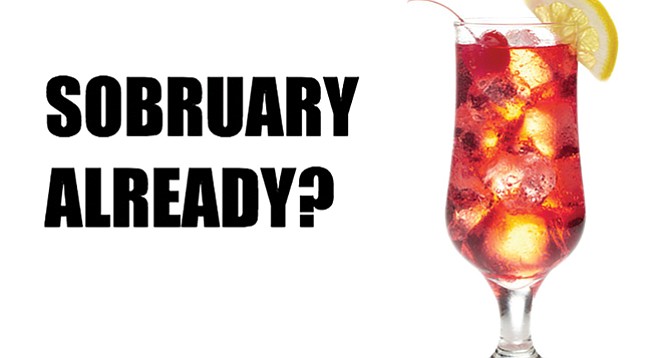 A handful of my friends are in the middle of Sober February, and I couldn’t be happier! Since I don’t drink anymore, I often feel awkward going out. Most of my friends are moderately heavy drinkers, and they almost always have a few rounds and get tipsy while I’m sitting there sober. It’s not that I miss drinking, but I still feel left out. After February is over, I want to tell my friends how cool it was to have everyone sober, and maybe they’ll agree to sober nights out with me in the future. Of course, I realize that’s a huge ask, but what are friends for, right? Would I be out of line to request this?

Should your friends give you grief over your sobriety, reconsider your friendships. If that’s the case, they’re probably moments from offering you backstage passes to a Kings of Leon show and asking you to DD all the way to L.A. for the concert so that they can sing a six-part disharmony of “Sex on Fire” the whole way.

However, since the tone of your letter suggests that the only objections here are yours, perhaps you have some soul searching to do over why exactly you balk at your friends’ social lubrications.

(The Social Lubrications is a killer band name, BTW.)

You probably have great reasons for this drinking discomfiture, but asking your friends to make major adjustments to their shared hangouts is not fair. Come to grips with whatever it is that makes “booze” a four-letter-word in your eyes, accept that it’s perfectly okay for others to drink while you do not, and order the Shirley Temple I know you’re just dying for.

You can put it out there that you’d appreciate meeting up at places that offer something to the nondrinkers and designated drivers of the world. If it comes down to, say, the Office vs. Coin-Op for happy hour, maybe you guys can agree to go to the place with the pinball machines and save the drinks-only spots for another day.

Happy Sobruary to all you temporary teetotallers out there! Sucks to be you, but I admire your commitment.

I think you missed Sober Steve's point. When you’re out on the town drinking with friends and everyone is is the same frame of mind. It's easier to deal with people who have "had a few" if you have also "had a few". But when you abstain, regardless wether it is out of necessity or a life style (health or other) choice, you can easily see how alcohol makes people even just a little obnoxious and it can wear on your nerves to the point where you don't even want to go out with them anymore.

OK, I'll get all touchy-feely to make this clearer: He didn't say he finds his friends obnoxious. I think Steve's looking for greater validation of his choice for sobriety, which he won't get by asking his friends to make a group sacrifice for his peace of mind. He might think he will, but he'll build a better, stronger friendship if he comes to grips with the strength of his own decisions and accepts his friends as they are, drinks in hand or otherwise.

Now, if you'll excuse me, I have to go wash the "I'm Ok, You're Ok" off me before it stains my cynicism.