Pastor/musician finds fun on the dark side 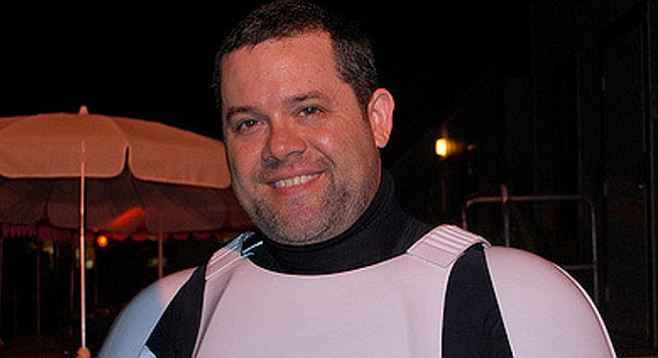 “My album release will be my first solo CD in 15 years, featuring songs written over that time period,” says pastor Brendan Prout, whose area ministries have included fronting worship bands and choirs. “I play basically anything you don’t have to blow into: electric and acoustic guitars, mandolin, keyboards, bass, drums, vocals, cajon, djembe, taiko, conga...hoping to get my hands on a bouzouki at some point!”

A longtime local worship leader, Prout’s sermons frequently quote what he refers to as “great hymnists,” such as Bob Dylan and Howard Jones. Having played in local 1990s bands Closure, Jonah’s Sign, and Book of Paul, Prout says, “I remember one particular show at the old Soma on Island downtown that was super energetic, playing in a band that changed its name almost every gig that we played for a period of time. The Wayfarers, the Shelter, the Neon Thunderducks, the Standing Ovations, Sheol Vine, December’s Tragic Drive, Appleseed Cast...all the same band.”

Prout’s known for his rock-and-roll chapel services at Comic-Con. “I’ve been performing there every Sunday morning for the past ten years,” he says. “Last year, I performed with Kyle Hildebrand from Walking Water, and for many years have performed with Sam Hornedo from Winterhawk.”

He’s currently finishing work on a solo release. “While it is my album, it’s still a collaborative effort,” and among several musician friends, “one of the songs features my nine-year-old daughter on electric guitar and vocals.”

Prout also writes for Worship Leader Magazine and teaches at related national conferences, but the avid Star Wars fan has a favorite credit to cite. “Performing onstage as a stormtrooper for Weird Al Yankovic every time he comes to town has been pretty rad,” he says of the recurring gigs staged by Yankovic with the 501st and Rebel Legion costuming clubs. “That sort of thing happens when you’re on the Comic-Con committee, not to mention in many sci-fi and Star Wars clubs.”