40 acres and a dream for Mission Bay

Kendall-Frost Marsh isn’t as big as it should be 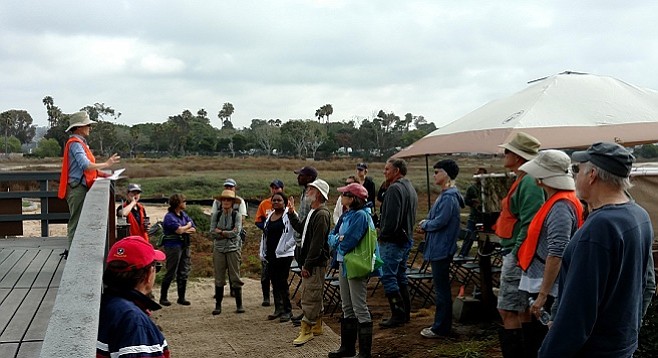 A January 30 open-house event provided community members, students, and a handful of interested passers-by a rare glimpse into a piece of land on the edge of Mission Bay that contains the last bit of natural habitat remaining from before the bay was dredged and turned into an aquatic park in the 1950s.

"It's an opportunity for the community to get out into the Kendall-Frost Marsh and see this amazing bit of salt marsh we have here in Mission Bay — it's the only 40 acres remaining of the 4000 acres that were originally here," said San Diego Audubon Society's Rebecca Schwartz of the tenth annual Love Your Wetlands Day event.

"Right now the marsh exists only behind this chain-link fence. That's because it's so small that it basically can't protect itself from things like trampling hikers, predators, cats, and dogs, et cetera," said Schwartz. "But by expanding the marsh into larger habitat we won't have to be so protective of it. We'll be able to have things like boardwalks, a nature center or observation overlooks, even opportunities for kayaking or paddle boarding — things that get people out and active in the marsh."

That hoped-for result may be a long time in the making, however. ReWild Mission Bay, a coalition pushing for the marsh expansion project, is in the middle of a three-year study on what lands, including those in the Kendall-Frost area and others including the current sites of Campland on the Bay and the De Anza Mobile Home Park, could be restored as salt marsh. After that, funding has to be identified and a final plan for the project drafted.

"The goal of ReWild Mission Bay is to protect these existing 40 acres, and to expand up to 170 acres of salt marsh here at the mouth of Rose Creek in the northeast corner of the bay," Schwartz said.

In the meantime, the group is calling for volunteers to get involved in restoring habitat on the land they do have to work with.

"San Diego Audubon partners with the UC Natural Reserve System to host community restoration events" aside from the once-a-year treks into the marsh that are open to the public, said Schwartz.

"There's an area that's been graded to provide a more gentle slope for what we call 'transition' or 'upland' habitat — when we did that we also removed a lot of invasive species," she said, pointing to an area where a team of student volunteers is currently at work with shovels and rolls of netting. "Next, we'll be working with community members to bring in more native plants."