Stung on her first day

"I have been surfing the reefs trying to get used to having stuff underneath me besides the sand." 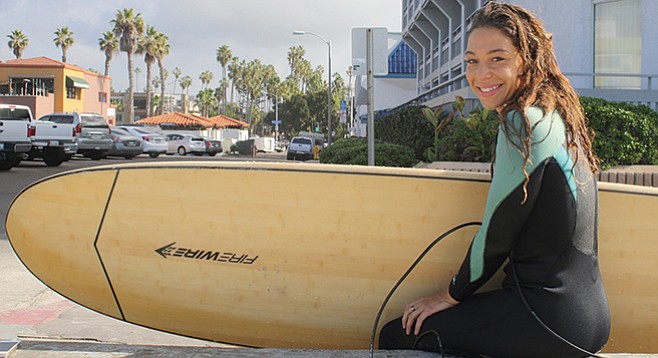 Darian Alexandra moved to Pacific Beach from northern Indiana on Christmas day 2014 with the sole purpose of learning to surf. She was stung by a stingray her first day in the water. But she didn’t see it as an omen.

“I surf every day at least once, sometimes twice, a day.”

When she first moved to town, she lived in a few Airbnb’s near the water in Pacific Beach.

“I was on a run one day and I found the studio that I live in now. Before that, I used to ride a couple of miles from northern PB and grab a friend’s board to surf. He had two foam boards over by Tower 17 that I used every day.”

She usually sticks to north PB. Right now she is practicing surfing reefs.

“I surfed Trestles once and the rocks were intimidating. So I have been surfing the reefs [in PB] trying to get used to having stuff underneath me besides the sand. I have gotten my foot sliced by my board but not by the reef yet.”

The best advice she received while she was learning to surf was, “When you are paddling, it is not about how fast you are going but how deep. I think that speaks a lot about how you surf — how deep you go into it.”