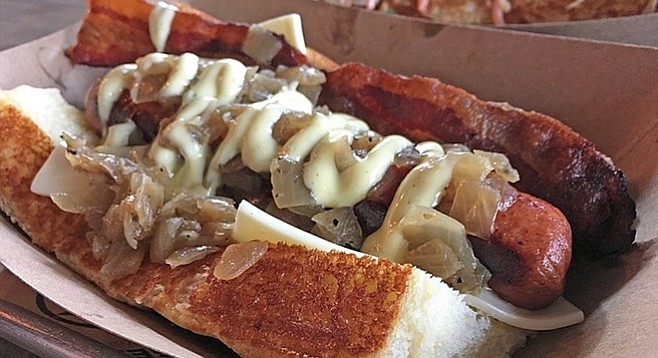 A new restaurant concept opened in East Village a couple months back called Dog Haus Biergarten. The Biergarten distinction is dubious — aside from a small amount of sidewalk seating, most of the place is indoors. But the “dog” part is accurate enough — the menu is built around 100% beef hot dogs and burgers.

The concrete space does benefit from tall windows fronting both sides of the corner storefront, letting in loads of sunlight. Otherwise, it’s got a fairly sterile industrial vibe fixed around a bar and meat counter. 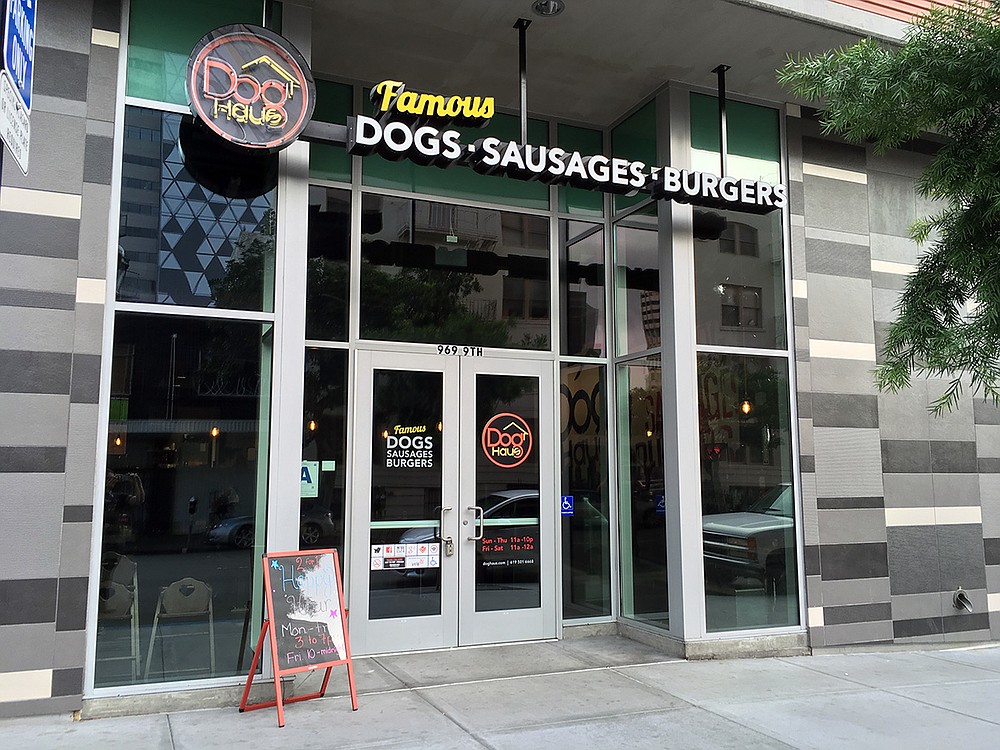 You may build your own dog, beginning with a hot dog, bacon-wrapped hot dog, or housemade sausage.

You may build your own dog, beginning with a hot dog, bacon-wrapped hot dog, or housemade sausage. Dozens of topping options range from the universal standards (chili, sauerkraut, or caramelized onions) to California standards (avocado, cotija cheese, or arugula). Nearly as many sauces are available too, with the most exotic being Sriracha and peanut sauce.

If you want to forgo toppings altogether, you can have any hot dog or sausage made into a root beer battered corndog. But before you do, take note that the standard dogs here are served on the famously soft and sweet Hawaiian bread. 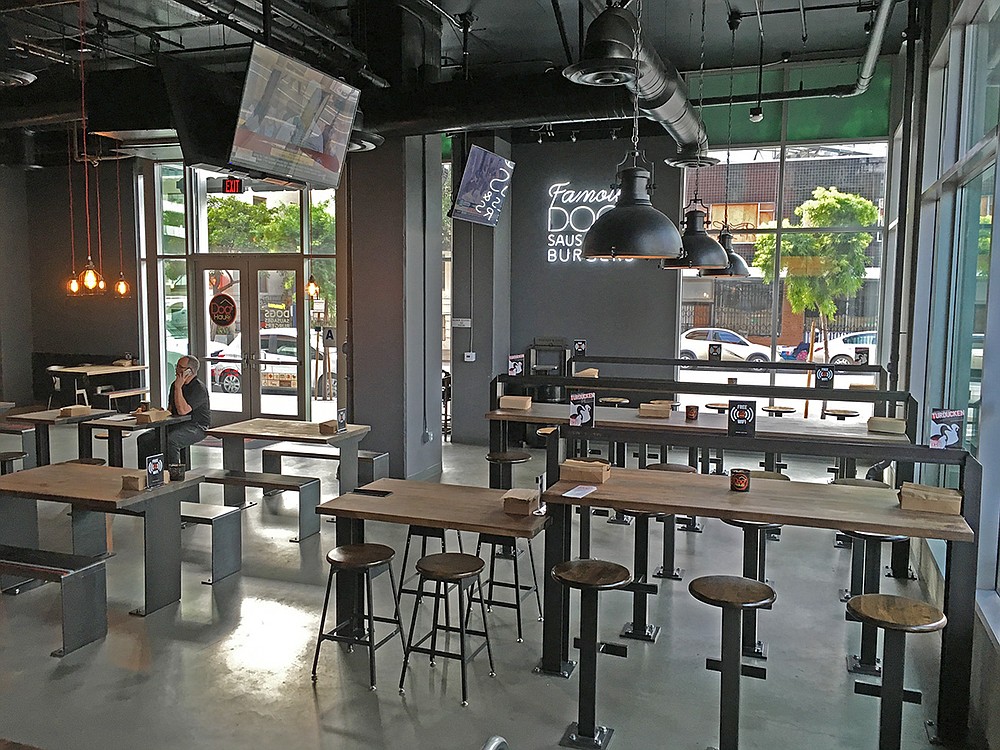 Dog Haus has a fairly sterile industrial vibe fixed around a bar and meat counter.

I went with one of the chef-designed Haus Dogs, specifically one topped with smoked bacon, white American cheese, caramelized onions, and garlic aioli. The name? The Scott Baioli. Hilarious, right? I chose it thinking I would come up with some joke about the infamous celebrity Trump supporter, but in retrospect I think we’ve wrung all the joy we’re ever going to get out of Chachi. 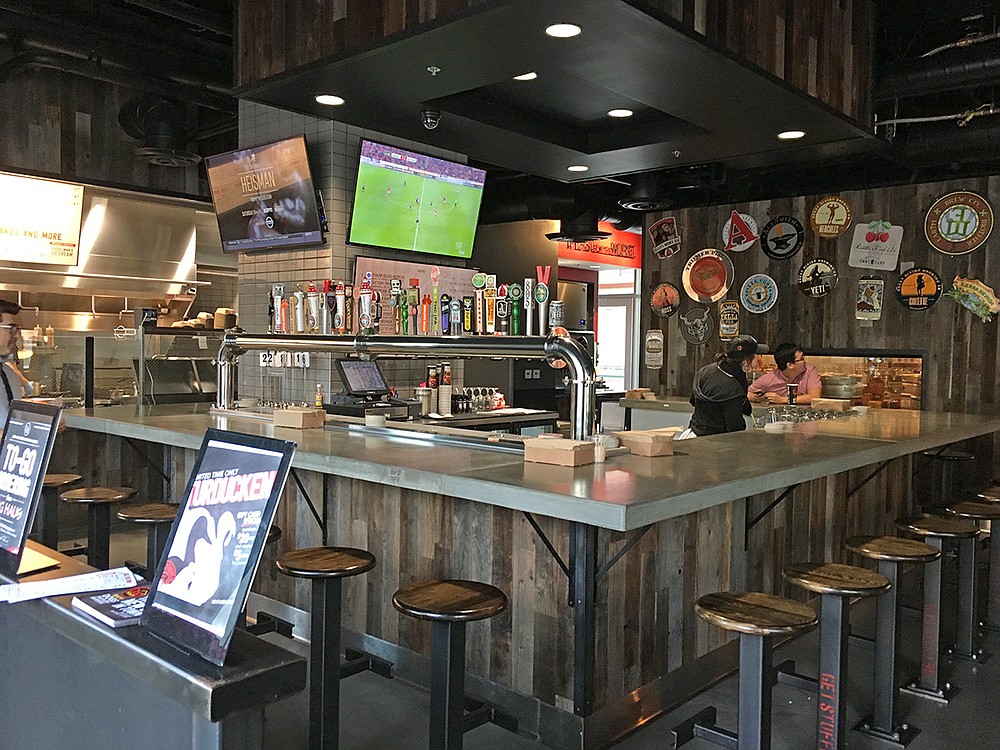 The thinking seems to be that hot dogs are enough to drive a fast-casual concept, particularly if you add craft beer.

The hot dog tasted…very hot dog like. The Hawaiian bun offered a nice twist, but otherwise I didn’t get anything to justify the restaurant’s self-attributed "craft casual" label.

Turns out Dog Haus is a rapidly expanding franchise that came out of Pasadena in 2010. The thinking seems to be that hot dogs are enough to drive a fast-casual concept, particularly if you add craft beer. I’m not convinced, but the beer selection helps a lot — I noticed a solid assortment of local breweries on tap. And the quality of the food is about three times better than der Wienerschnitzel at only about twice the price.

Actually, the problem might be that I’m comparing it to Wienerschnitzel. If you want to, you can chalk this one up as a place young parents can take their kids to eat and still be able to drink beer.

Hmmm. Struggling Burger King just recently added hot dogs to its offerings. With the ho-hum basic menu, I actually went for a chili dog that wasn't bad at all for the price. The dogs are supposedly pure beef. Does that get you a Nathan's dog? Not at all, but for the price, they aren't half-bad as a mid-day bite to eat.

Are dogs coming back as respectable fare? It just could be the case. Wienerschnitzel has been dropping locations all around the county. It's getting hard to find a dog, especially if you want a good one.