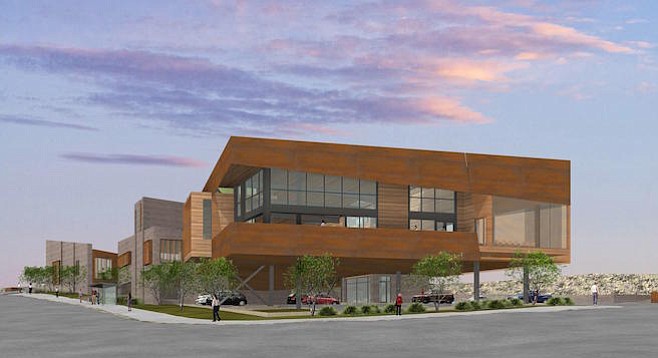 While the architect and building size remain the same, the updated plan for the new 25,000-square-foot San Carlos branch library is now one story instead of two.

The 8200-square-foot branch at 7265 Jackson Drive opened January 9, 1974. The new building (designed by David Pfeifer of domusstudio architecture) will extend from that property to the former site of an Atlantic Richfield Company gas station on the corner of Jackson and Golfcrest drives. The station closed in 1994, according to a 2013 Reader story, and the portion of the new library on the now-vacant 22,000-square-foot lot will sit atop columns. 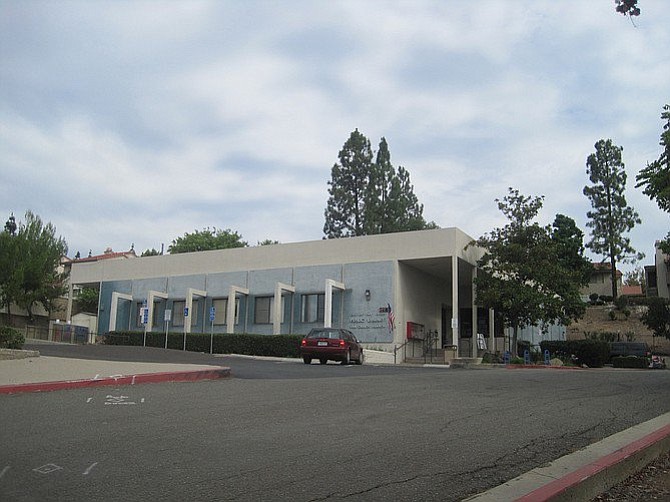 City of San Diego spokeswoman Nicole Darling on December 14 wrote that the 2007 “schematic design was redesigned to allocate all 25,000 square feet to library use. Ancillary community program spaces, police storefront and community service center were removed…. This was done to provide all library services on one floor for enhanced library operation and staffing efficiencies, and to reflect current library design programming requirements and trends.”

The cost estimate will be updated after the schematic design is presented to Navajo Community Planners, Inc., on January 11. Darling said, “The previous cost estimate was $20,598,237, and the city indicated this number would be subject to change based on updates to the design and other factors.”

At a San Carlos Area Council meeting earlier this month, library building committee chair Judy Williams gave a brief history of project. When the gas station closed, Williams said the late Jack Winer (a library advocate) “gently” suggested that the land would be “a wonderful place” for branch expansion.

According to the 1995 contract that the Reader reported on in 2015, Atlantic Richfield would lease the land to the city for $1 annually until the mitigation of hazardous substances was completed. Once the County of San Diego certified that mitigation was complete, the city had the option to buy the land for $150,000.

Williams said Atlantic Richfield has been testing regularly. “I received a note [on December 7] stating ‘everything is positive.’” However, Atlantic Richfield wants to install another well and use both wells for testing. She said the company anticipated six months of testing, and, the city could get a permit in eight to nine months. Williams cautioned that the schedule could be affected by a wet year. As for construction, “I think we need to plan for a year.”

The design allows vehicular access from Jackson and Golfcrest drives. Currently, drivers enter by turning right into the Jackson Drive driveway closest to Golfcrest. They exit from the driveway to the left. If the lot is full, patrons turn right onto Jackson, make a U-turn, head to Golfcrest, and park in the corner lot. 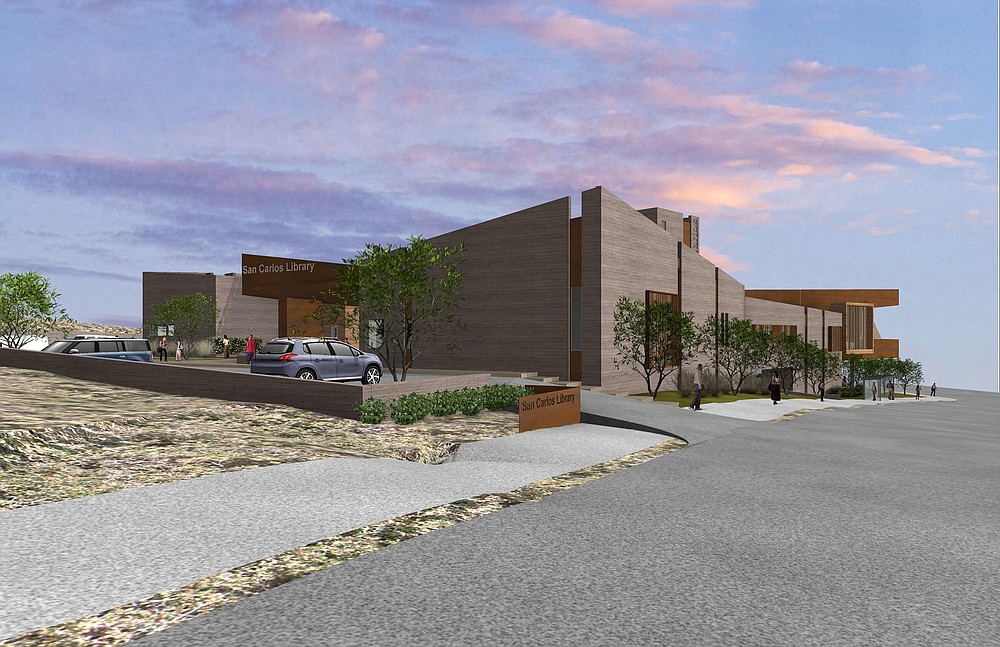 Design of main entrance at top of grade

The main entrance to the new building is at the north end of the city property. There will be an estimated 31 parking spaces on the upper level. On the lower level, the building-topped columns will create a covered, open parking lot with about 46 spaces. Column height has not been finalized. Darling wrote, “The grading plan has not been completed; this will be developed further after schematic design. The column at the southeast corner of the lot is approximately 14 feet tall. Since the site is sloping under the building, the column heights will vary.”

Patrons on the lower level will use the elevator or stairs to enter the building. On the upper level, patrons go through a courtyard to enter the library or the community room that has for seating for 250. San Carlos branch manager David Ege said a gate will allow the room to remain open when the library is closed. Residents liked the idea of a gate designed like the one at the Rancho Bernardo branch. It “looks like trees when closed,” Ege said. 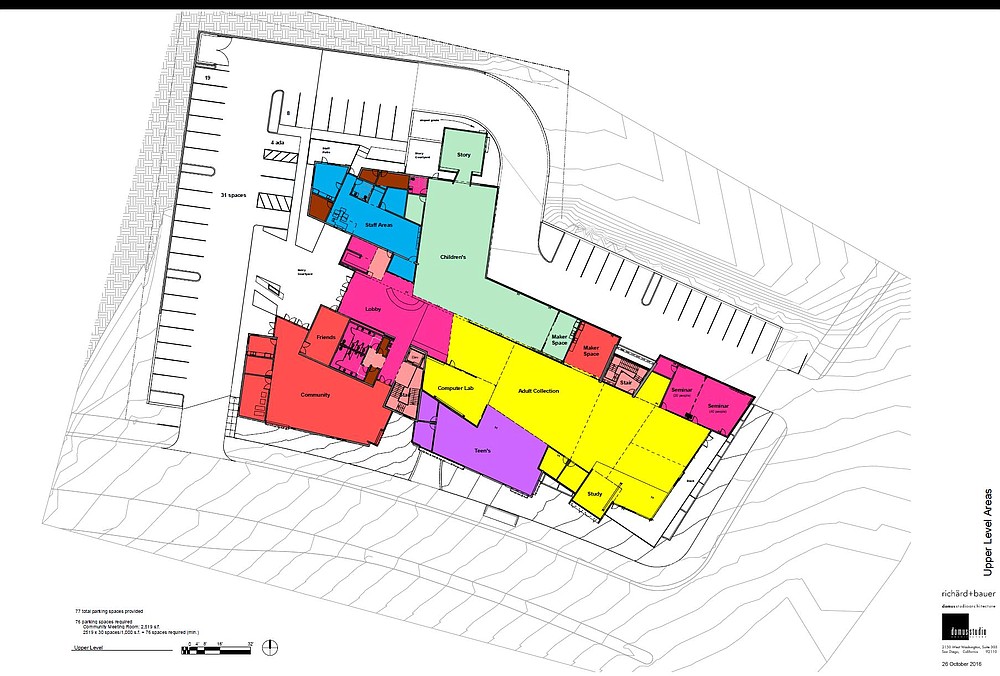 He said the branch currently contains 62,000 items, an amount that could expand to 72,000 in the new facility. Amenities in the new branch include a large reading area for adults and an open terrace. The children’s area includes a story courtyard and play area. A glass wall serves as a buffer between adults and children. There’s also a teen space with group study modules. Ege said he plans to encourage students from Patrick Henry High to work on projects in the library. Their projects could be displayed on top of shelves and in display cases, he said.

Ege said the computer lab will have 10 to 12 computers and “lots of plug-ins. We learned most people have computers.” There are two maker spaces where people can be creative, and another meeting room with seating for 60 that can be divided into two rooms.

Darling wrote, “At this point, we do not have an anticipated date for the start of construction on this project. This project is in the design phase and funding still needs to be identified. At least two other branch libraries, San Ysidro and Mission Hills–Hillcrest, are expected to start construction for new buildings in 2017.”

“It’s too early in the process to determine” how much the community will be expected to raise. Darling said potential donors could contact the Library Foundation or the Friends of the San Carlos branch library.

This has got to be the longest library build in history. They have been workin on this fiasco since 1994. Every politico and department head have been putting thier fingerprints on this project. They could have torn down the old library and built a new one several time since they started fooling with this expansion. There is no need for a bigger or better library at this location