Fear of a drab bridge in Point Loma

Rehab of span over Nimitz Blvd. calls for chain-link fencing 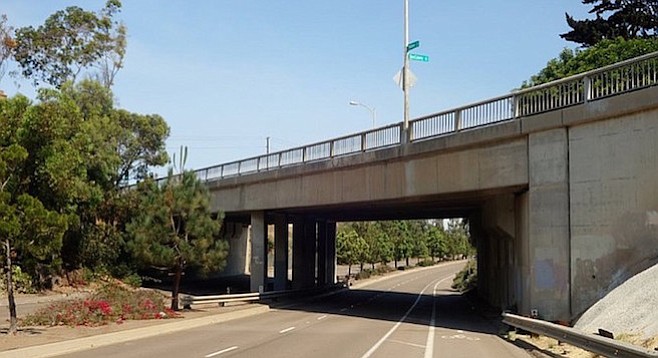 Some in the Point Loma community see the Voltaire Street bridge as a gateway to their neighborhood. So, they want something a bit more attractive than a chain-link fence when a bridge rehabilitation project conceived in 1997 finally gets started.

Originally built in 1959, the bridge passes over Nimitz Boulevard on the 3900 block of Voltaire Street between Wabaska Drive and Sea Colony Court.

Don Sevrens, a former journalist who has lived nearly 50 years in Point Loma, has been working to get everyone in agreement. 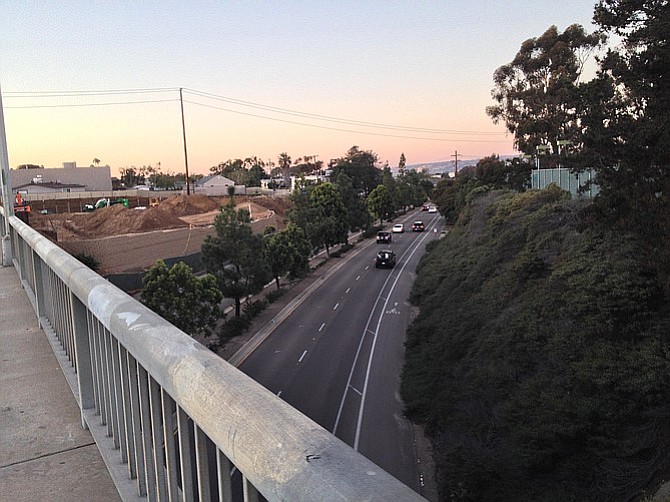 View of northbound Nimitz Blvd from atop Voltaire Street bridge

“With the city and community working together, we could have a striking entryway to the Peninsula,” said Sevrens. “A very attractive bridge that ties into the 'Welcome to Point Loma' sign and the wonderful landscaping that the Point Loma Association has put into place on Nimitz Boulevard. Changes to the bridge and a related adjacent mixed-use project can set the tone for a major revamping of the entire Voltaire Street corridor. The community has an imaginative design by a prominent architect [Joe Holasek]. The cost for all this? Possibly as low as $20,000." 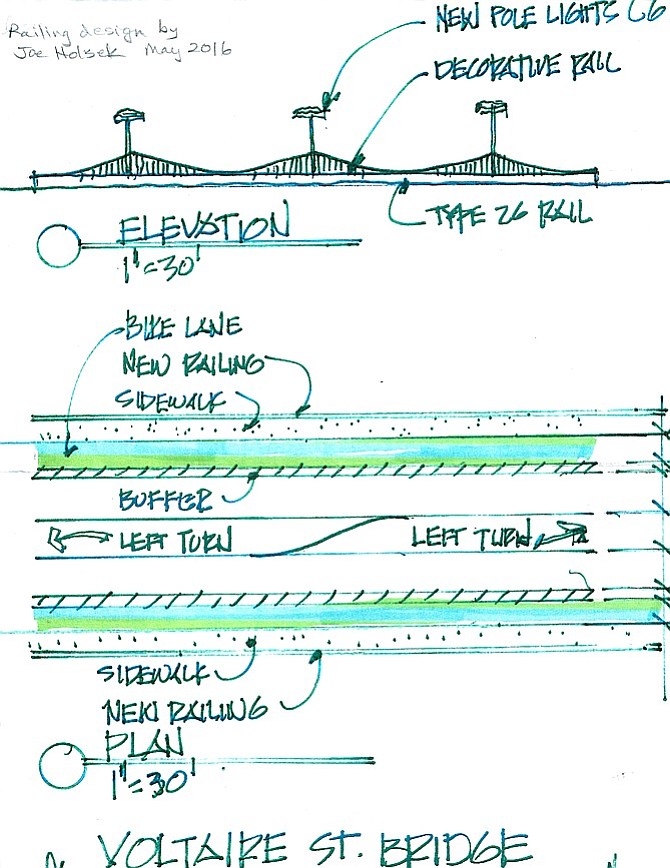 Sevrens added that the local planning board and the public (via a small nonscientific public poll) support Holasek's suspension bridge proposal as the preferred alternative and the graceful arches as a second.

According to Mónica Muñoz from the city’s public works communications department, the approximate $1.8 million needed for the project will be funded from TransNet. She said TransNet doesn’t fund the kind of bridge beautification the community has asked for.

TransNet is a half-cent sales tax that funds local transportation projects. First approved by voters in 1988, it was extended for an additional 40 years in 2004.

It’s worth noting that the Georgia Street Bridge, currently being rehabilitated to its 1914 grandeur, is partially funded by TransNet ($2 million). 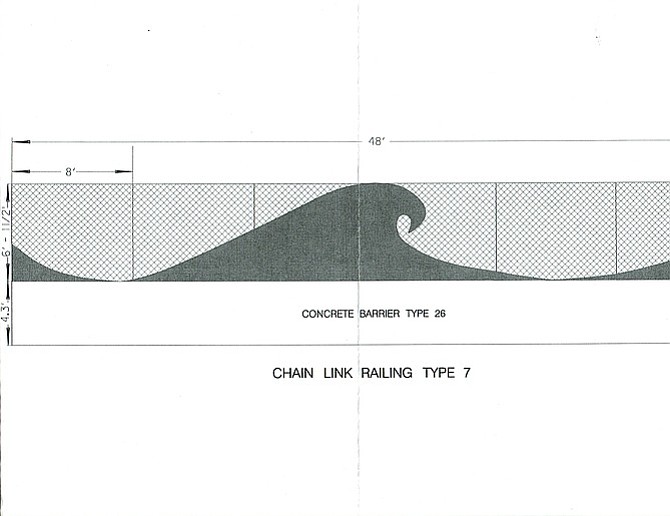 One option offered by the city was a design with four sheet-metal waves attached to colored chain link on one side of the bridge; the other side would be a plain chain-link fence.

Muñoz sent me an email from councilmember Lorie Zapf’s office that was sent to Sevrens in October (in collaboration with Mayor Faulconer’s office). In the email, Zapf representative Conrad Wear recommended that the community manage the beautification of the bridge on their own by applying for the proper permits and funding it themselves, after the city finishes their project. The email also stated the city is anticipating higher costs than originally expected — meaning there won’t be an extra $20,000 to make it pretty.

Sevrens countered, “Waiting until the bridge is finished only to tear it up for a relatively inexpensive but visually striking improvement seems more of a course to failure than to success. By the city's own account, there is nothing structurally wrong with the bridge. Maybe it’s better to delay the project until the city can be more responsive to the community.”

Muñoz confirmed the bridge has no structural deficiencies (last inspected by Caltrans in 2016).

Are any parts of the project being done due to the adjacent development? Muñoz said the developer will contribute about $45,000 to the project for the traffic-signal modifications and accessibility curb ramps that are required.

"The city has no problem requiring a developer to pay for public improvements in connection with this project," Sevrens said. "We believe any expenses to make this a bridge Point Loma can be proud of can easily be raised by private fundraising, developer contribution, and grant money. If only the city is willing."

When did the city first ask for input from the community? Muñoz said that the project engineer has met with community groups four times in the past eight months and the city has done seven formal presentations. As far as the community input amounting to anything, she reiterated that the community’s aesthetic input can’t be funded by TransNet.

Sevrens countered, “I’m not aware of the city presenting to the community other than a three-minute token presentation to the planning board. If there was previous outreach, I’m not aware of it.” 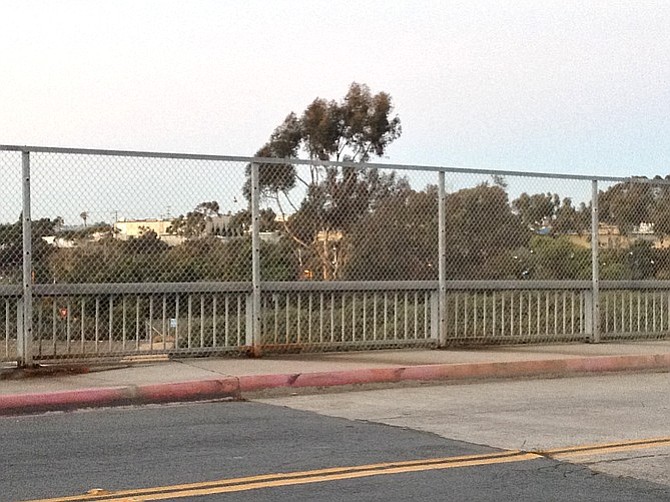 According to Sevrens, the community isn’t thrilled about the proposed plain chain-link fence. “We’ve been told repeatedly by members of the public works staff under Daniel Nutter [project manager] that chain-link fencing is required by state law.”

Muñoz said the fence will be similar to the Famosa Street Bridge (off Voltaire) except it will have a black-vinyl-coated railing. She wasn’t able to ascertain the source of the requirement for plain chain-link fencing before publication of this article.

Steven Shultz from the local Caltrans office couldn’t speak to what law the city is referring to, but did point to a requirement for fencing on freeway overpasses where pedestrians are allowed — in order to prevent objects being dropped or thrown upon vehicles passing underneath. He said while Caltrans refers cities to state code for guidance, the decision is ultimately the cities.'

So why all the stops and starts? The city published bid notices in 1999 and 2000 for this project. Muñoz explained that it was originally intended to be federally funded but was determined ineligible after performing several studies. According to Muñoz, TransNet funding was the needed green light to finally move the project forward.

Muñoz said the design is nearing completion and a bid may be advertised early spring 2017.

Sevrens said he’s concerned about the city’s timeline and their hesitation in meeting before the design is a done deal. “A different style of metal railing with night lighting can make all the difference in the world. We have a prominent architect with a striking proposal. What can be the harm of having a one-hour meeting? It’s time for the mayor's office to intercede and broker a meeting with the community — before the city locks in 75 years of drab."

Muñoz said on December 21 that the state law the city is hanging the requirement for chain-link fencing on is the same law that Schultz discussed that only applies to freeway overpasses. "The city of San Diego does not have design standards specific to bridges, thus the city has adopted the state (Caltrans) standards. For city owned bridges that cross over roadways, the city requires a protective screening (railing) be installed. For this reason, the Voltaire Street Bridge rehabilitation project will include a Type 7 chain link railing on top of a Type 26 concrete barrier."