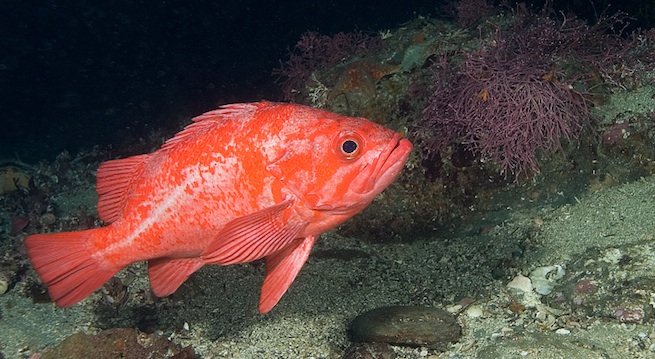 Inshore: It’s been a bit slow for the local fleet with only just under 340 anglers for the week. The catch is mainly rockfish with a few other seasonal bottom fish mixed in. After two winters with above average conditions, water temps are near normal for this time of year and so is the fishing. A few yellowtail, "homeguards," will always be around, so dropper-looping or fly-lining a mackerel, sat, from the kelp edge out, isn’t a bad idea, especially if there is some surface activity or birds diving on bait. That said, it’s freezer-filling time and those fishing the bottom will have better results for their effort in our local waters. For now.

Outside: There’s not much to report offshore north of the border this week due to dropping water temps and weather, though the boats that do make it out are moving their concentrated effort from pelagic to rockfish, lingcod and sheephead. The long range fleet, however, is off to a great start.

The Shogun is having good success on yellowtail with a few tuna mixed in at Guadalupe Island. Boats running south to the Ridge or the Hurricane Bank are scoring large yellowfin tuna; the Independence reported a massive cow at 339 pounds as the first fish of their 10-day trip. As the moon phase slowed the bite for the big yellowfin, the boats are working back up the line and having great success pulling on 25- to 40-pound yellowtail and school-sized tuna off Mag Bay and Cedros Island. Still, it’s been a great start to the winter season with many yellowfin tuna over 200 pounds coming out of the holds when the boats return.

To protect Wohlford from invasive exotic Quagga mussels, there is a ban on private water craft and equipment that could have been exposed to mussels. Restricted equipment includes private boats, canoes, kayaks, float tubes, trolling motors, fish finders, anchors, and other equipment that contacts the water.

Lake Wohlford is offering $20 all day motor boats to seniors on Tuesday and Thursdays and to active military on the first and third Saturdays of each month.

Permits and Boat Rentals are now being issued at the Ranger Station. At present we are limited to cash transactions only. We apologize for any inconvenience during this transitional period.

Opening day of trout season was witness to a wide open bite with limits being reported from Boat Dock Cove all the way to the West Buoy Line. Big fish of the week belonged to Daniel Fernandez of Downey who used a smoking jigz to haul in a 14.50# rainbow at the West Buoy Line on opening day. Second place went to Bruce Smith of Clairemont who caught an 11.70# trout fly fishing with a white leech. Other notable catches include; Tim Xiang’s 11.35#, Joey Sitthivorada’s 11.35#, Caprece Pressley’s 9.30# and Wilber Roche’s 6.10# trout. So far the action is best on the northern shore between Boat Dock Cove and the West Buoy Line. Top baits are powerbait (rainbow or green), kastmasters, and rooster tails.

Largemouth bass can be found around structure. The re-appearance of trout in the lake makes this an excellent time for swim-baits.