Clairemont real estate up for grabs

San Diego Association of Governments may be doing the grabbing 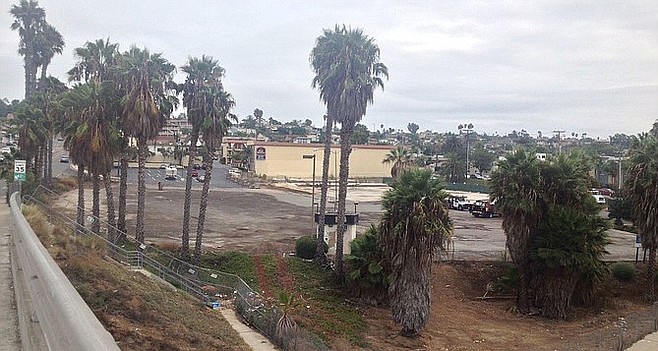 On September 9, the San Diego Association of Government’s board of directors voted in favor of taking a prime corner lot above Mission Bay Park by eminent domain for a new trolley Park & Ride.

Today (December 16), the Sandag board will meet behind closed doors to discuss whether to continue on that path of eminent domain or get behind the new property owner’s mixed-use proposal (Protea purchased the lot in September).

The former shopping center on Clairemont Drive and Morena Boulevard was built in the 1950s but has been mostly vacant for the past decade (a hotel is still in operation at the site).

Sandag’s Helen Gao said the association is still seriously negotiating with Protea and that it's standard practice to conduct eminent-domain proceedings concurrently with acquisition negotiations. She wasn’t able to comment specifically about the negotiations other than to say they are ongoing; she also confirmed that they will be meeting behind closed doors.

In favor of eminent domain is Dave Potter, a Bay Park resident and urban planner with more than 40 years of development experience in San Diego.

“Sandag should pursue eminent domain to guarantee that trolley parking is completed by the time the trolley begins operation," says Potter. "Should Sandag wish to pursue additional development on the site, then there should be an open bidding process to allow multiple developers to provide their vision. And those bid packages should be reviewed by the Clairemont Community Planning Group....

“My objection to the Protea proposal is twofold: the failure and unwillingness of Protea to seek input from the council-recognized community planning group and a serious lack of project details. Where is the site plan? Where is the traffic study? What are the elevations? Protea’s rendering shows five levels. I can't imagine they won't exceed 30 feet in spite of what the Raise the Balloon group says.”

Raise the Balloon was formed in 2014 to oppose a zoning change that would have allowed a 60-foot-tall condo project on Morena Boulevard. Potter said the group has used fear-mongering by insinuating Sandag might hand over the lot to another developer that could build taller than 60 feet. Potter questions the group's claim that Protea’s design adheres to the 30-foot height limit. And there is weight to Potter’s questions, as he was the author of the original height limit in 1970 (along with the city attorney’s office).

I asked Jeffrey Essakow, president of Protea, if he prevails with Sandag on December 16, whether there are any plans to exceed the height of the current three-story hotel on the adjacent lot. 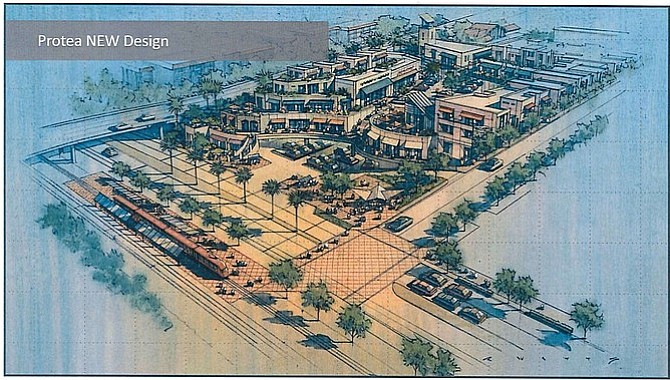 “We intend to work with the city and the community to achieve a balance between aesthetics, the community’s needs, and the city’s legal requirements," said Essakow. He also said the proposed plans for the mixed-use development will include between 55,000 to 60,000 square feet of commercial space, with the bulk of it being retail, and 35 to 40 residential units of varying sizes.

Sit-down restaurants, a grocery store, and a pharmacy are possible tenants, said Essakow. He confirmed there has been strong interest from retailers but was not ready to name names. 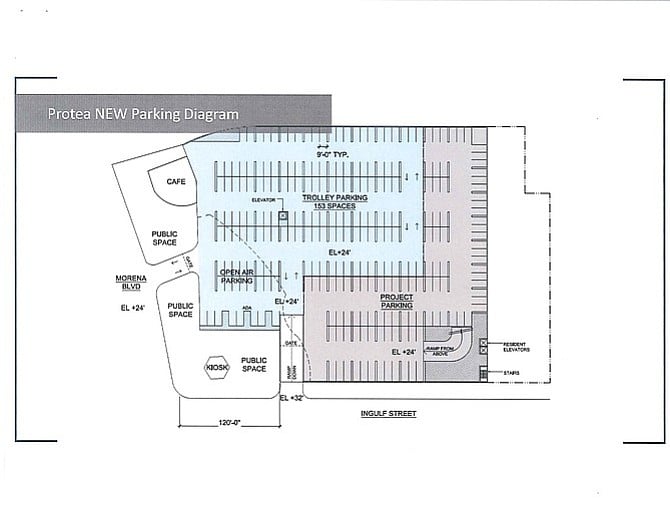 The developer incorporated over 150 trolley-user parking spaces into the plan.

In regard to parking, surface-level and underground spaces will be provided for residents and retail customers.

“This will truly be a mixed-use transit-orientated development, and we will be providing 150 parking spaces in a dedicated area for users of the trolley,” said Essakow. “We will also grant Sandag an easement to use the property as a [construction] lay-down yard for three years, after which period we will commence construction of our development.”

When will Essakow formerly present to the Clairemont Community Planning Group?

“I’ve been to a couple of very productive meetings. At the moment, we’re just focusing on striking a deal with Sandag.”

As far as questions about the motives of the realtor leading the charge for Protea's development plan — Raise the Balloon spokesperson James LaMattery — Essakow said that there has never been any discussion about LaMattery becoming Protea’s broker.

On November 22, Potter saw a Raise the Balloon social media post claiming that councilmember Lorie Zapf “is 100% in support of Protea’s project” and asking that the community make as much noise as possible by pressuring Sandag chair Ron Roberts via email petitions to halt eminent-domain proceedings.

Potter contacted Zapf’s office in November to say that it was premature for her to take a position on Protea’s project before reviewing the city’s staff report, environmental impact documentation, receiving recommendations from the local planning group, and hearing public testimony at a future city council meeting.

Donna Cleary from Zapf’s office said that Zapf isn’t advocating for any particular plan or developer. She would just like to see something other than a trolley parking lot. Zapf added that the community has waited decades for a community-enhancing project on the parcel.

“It is clear that the owner and the developer [Protea] of the property has strong community support and I wholeheartedly agree,” said Zapf. “I am limited in what I can discuss, because Sandag’s action was taken in closed session; however, I am hopeful that the will of the community will prevail and my Sandag colleagues will be persuaded to support this project and reverse the decision to pursue the eminent-domain process.” 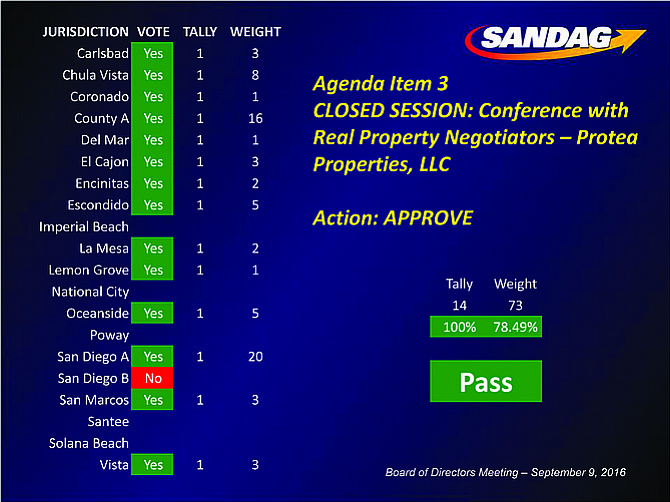 Zapf's was the sole dissenting vote in September. Mayor Faulconer will likely be weighing in today; his and Zapf's votes will account for 40 percent of the total vote.

Gao said that Sandag has received approximately 500 protest letters or emails to date, with the majority being the same form letter.

At the September Sandag meeting, Zapf was the sole vote against eminent domain. While councilmember Todd Gloria voted in favor of it, he has since moved on to the California Assembly. Sandag lists councilmember Chris Cate and mayor Kevin Faulconer as alternates. Rebecca Kelley from Cate's office said that Cate is not scheduled to attend the meeting, so it’s likely Faulconer will be weighing in. If Faulconer votes Zapf's way, their collective vote will account for 40 percent of the total vote.

If an agreement isn’t reached, Gao said that a court hearing for the eminent-domain lawsuit is scheduled for January 6.

Per Donna Cleary from Lorie Zapf's office: "Sandag [board of directors] voted unanimously not to proceed with eminent domain." Cleary also said that new city-council president Myrtle Cole voted today and not Faulconer.

It should be pointed out that David Potter is the only person in the entire area (other than Bruce Kleege, the owner of the hotel) that supports SANDAG's plan. Everyone else that lives in the area are against SANDAG's terrible misuse of the property, and have repeatedly and strongly opposed their plan.

This is an important, key parcel that local residents have been waiting for decades to see developed into a community serving resource. What SANDAG is planning to build is an insult to the people that live in the area and is a loss for all citizens of San Diego. Everyone should be outraged at the insensitivity and arrogance that SANDAG has shown towards the the property owners that will forever have to live with the SANDAG plan.

Transit-oriented development is a priority. So is maintaining or even improving the quality of life for current San Diego residents. Those two priorities obviously can be in conflict. At this point, it appears the Protea proposal represents the best way of positive movement toward satisfying both of those priorities.

On a related point, the situation is much more complex than simplistic urban sprawl versus NIMBYism. Development in the area involves issues of traffic, noise, pollution, promises made by the City, and much more. Just one example: An attempt to rescind the Clairemont Mesa Height Limit Overlay Zone would have resulted in expensive litigation and perhaps major financial consequences for the City of San Diego. That is, rescission could be judged to be a taking by the City that would need to be compensated, potentially to the tune of hundreds of thousands of dollars per household. People should be aware of the actual issues involved before they offer their shoot-from-the-hip comments – lots of luck with that!