Not enough time with the director of Jackie 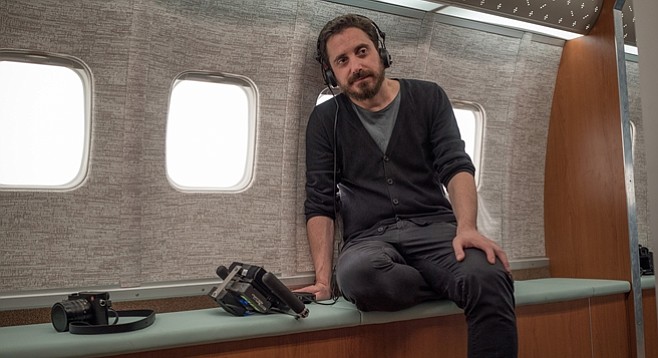 I owe my love of Pablo Larraín to the San Diego Latino Film Festival. Their programming of Tony Manero and Post Mortem was tantamount to extracting a giant thorn from this reporter’s paw. Tony Manero has the power to pll one out of a theater seat and drag their face across the screen. And like any great artist, Larraín’s work continues to grow and advance with each passing film.

Eight minutes into what was scheduled to be a 20-minute interview, the rep broke in with the equivalent of a bartender’s “Last call.” A scramble to choose a final question on the list of 20 proved to be a fizzler. Not to worry. A return talk when Neruda — the final installment of his trilogy set during the brutal Pinochet regime — opens in January is already in the works. Consider this Part 1.

Scott Marks: What was it like for a child of the movies growing up in war-torn Santiago?

Pablo Larraín: I guess like any other kid in the world who gets access to movies. There were movies that stayed with me, that modified my childhood and made me think I could be a filmmaker. Those movies are very different and they come from different sources. For example, I remember how important to me was Zemeckis’s Back to the Future. It was fascinating on many levels but mostly for me it was a lesson on how to work and build with time. Then I realized that the only way to do that was through cinema. There is no other mechanic or artistic activity that could actually do something like that other than cinema.

The same year I saw [Werner Herzog’s] Fitzcarraldo, which is on the other side of filmmaking. I thought it was fascinating and beautiful. Not just the movie itself, but also it was like a map to or metaphor for what cinema is. It’s just this guy pushing the absurd — a boat over a hill — and trying to get there by making an opera in the middle of the Amazon. This is what the absurdity of cinema does; people pushing this boat over a hill. I was captivated by that.

SM: Talk about absurdity. In Tony Manero you have a middle-aged family man of sorts who is obsessed with Saturday Night Fever, and who will stop at nothing to win a John Travolta lookalike contest. You were what, two years old when Saturday Night Fever opened in Chile on August 10, 1978. With all of the films that played Chile in 1978, why Saturday Night Fever? And considering what goes on in the film, did Paramount ever give you any grief for taking liberties with their product?

PL: Many films were banned due to the dictatorship. Not every movie would make it to Chile. Saturday Night Fever was very successful. Paramount was actually very generous with us. The allowed us to use the material. Even Travolta had to sign an agreement because we were using his face. We had to deal with the union back then, the Actor’s Guild, so everybody was like super generous.

SM: Remember that scene in Masculin Féminen when Jean Pierre Leaud rushes the booth and proceeds to read the faulty projections the riot act? You did Godard one better there. I’m a non-violent person by nature, but I can’t tell you how many time I’ve wanted to storm the booth and introduce the projectionist’s head to a lamp housing. Thank you for the vicarious thrill.

PL (Laughing): You are most welcome.

SM: And thank you for introducing the world to Alfredo Castro. Where did you find him and why didn’t he have a role in Jackie? He would have made a great John John.

PL (Laughing): It would have been hard. I don’t think he’s very fluent in English. He was a teacher who taught me in drama school. He’s a very well-regarded actor. He’s been so important in my career, and I’m glad he was able to find other jobs because of it.

SM: I’ve actually seen him laugh in other movies.

PL (Laughing): I think we allowed him to smile in a couple of my movies.

SM: I just finished speaking with Peter Sarsgaard. He said, “Ask him about how the water changes the quality of the film.”

PL: Well, it’s true. It’s incredible how a film being processed differently will actually change the quality of the image depending on where you make it. That’s why with digital, movies have lost all their identity. Every film pretty much looks the same.

[Just when things are getting rolling, the studio rep interjects with, “We have time for one other question.” My heart sinks. Since the purpose of the interview was to promote Jackie, I scramble to find the first question on the list related to the film.]

SM: Merriman Smith was an eyewitness to history, and his account of the assassination took home the Pulitzer prize. How much of the dialogue comes from transcripts and how much liberty did you take?

PL: There’s a few things that come from transcripts that we did from her...when Jackie talked with Arthur Schlesinger. But everything else is fictionalized by screenwriter Noah Oppenheim. There are a lot of historically documented things, facts that happened. What really matters here is how we approach the fiction.

Pull you out of your seat and drag your face across the screen? Ummm. I don't know, Scott. Sounds a tad rough on the chin and not something that would cause the viewer to enjoy the film even more. But, metaphors have never been my strong suit.

That's a term of endearment, Joe!