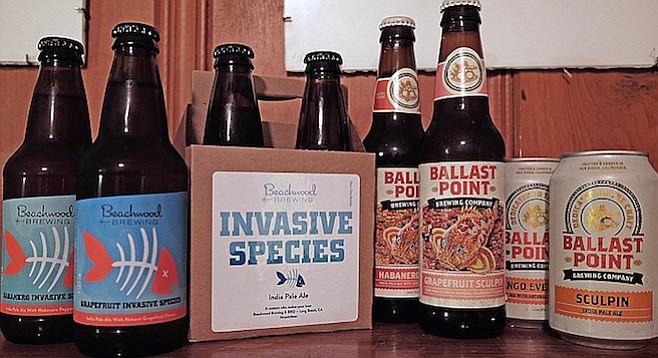 The battle between big beer and craft continues, and this time it's a Long Beach brewer taking shots at San Diego beer.

Earlier this year, big-beer subsidiary 10 Barrel Brewing's plans to open a brewpub downtown were met with opposition by local breweries, as covered by a Reader story with the headline, "Big Beer Invades East Village".

The independently owned Beachwood has taken the word "invading" to heart. This month, the reigning World Beer Cup champion released a mixed four-pack called Invasive Species, marketed with the tag line, "It matters who makes your beer."

"It matters," being a subtle reference to Ballast Point, which joined the ranks of big beer last year when it was sold to global beer distributor Constellation Brands. Less subtle is the Invasive Species label depicting fish bones — a poke at Ballast Point's tradition of making ales named after species of fish. One fish in particular: the sculpin.

Invasive Species features a quartet of IPAs, including grapefruit and habanero-flavored versions. Ballast Point's flagship Sculpin IPA found international success with these flavors, and Grapefruit Sculpin in particular, which is often cited as a factor in raising the 20-year-old brewery's price tag to a billion dollars.

Beachwood's decision to make Invasive Species its first 12-ounce bottle release reads part marketing, part line in the sand. Either way, when the four-pack showed up in local shops, I couldn't resist direct comparison. In one corner, Ballast Point: the OG San Diego brewery recognized as an innovator by multiple generations of beer fans; in the other, the rising Long Beach brand that is arguably California's best producer of IPAs in 2016.

First, the base IPAs. Invasive Species has a similar profile to Sculpin, with moderate juiciness and less bitterness. Overall, it's sweeter, hewing to the current tropical IPA trend more than the citrus and pine notes of Sculpin.

The grapefruit Invasive Species smelled sweeter than the grapefruit Sculpin, but when it came to tasting it, the opposite was true. While both are infused with "natural grapefruit flavors," the Beachwood beer came off less dry, with understated fruit, whereas grapefruit Sculpin has always reminded me of a beer-flavored Fresca soft drink.

Both of the habanero beers hit just the right level of spice, though the Beachwood version had a slickness to it that Ballast Point avoided. Even more than the others, this take highlighted how much fuller a body Sculpin possesses.

Ballast Point has the edge with the flavored IPAs, but that it's even close is a victory of sorts for Beachwood. And though Invasive Species can't possibly live up to my memory of Sculpin, the Ballast Point can I compared it to didn't either. Whether due to an off batch, my own changing palate, or Constellation's impact on the beer (real or imagined), I just didn't enjoy the Sculpin as much as I used to. That Beachwood IPA on the other hand? It tasted fresh and new, which means in this Independent vs. Big Beer battle, I've got to side with the underdog making great beer in Long Beach.