Arguments for and against pro-cycling measures

Cycling supporters envision a future where bike transportation will be commonplace. 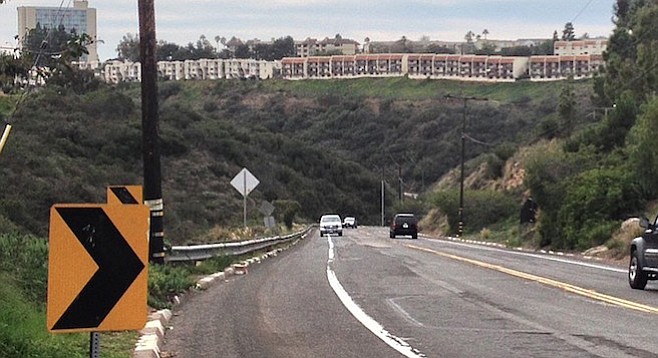 I was very disappointed in Moss Gropen’s article “Stop the Irrational Bike Bias.” Regardless of one’s views on the subject, readers would like to see balance and serious analysis. This entire article read like a promotional piece for Randall O’Toole and Baruch Feigenbaum, who are well known in urban planning circles as staunch foes of policies that promote denser urban development and active transportation modes. They are the only voices quoted in the entire eight pages.

There are lots of transportation and planning experts, nationally and in San Diego, who could and should have been quoted expressing very different perspectives, simply to provide genuine balance. Since there is only one cover story in each issue of the Reader, it should consist of real journalism, not mere diatribe.

Thanks for the article, “Stop the Irrational Bike Bias.” I’ve been writing and saying the same thing, and I’m a longtime cyclist! Every bike lane in San Diego is empty. Parking spaces are taken to add bike racks in the street that could be on the sidewalk. Deco bikes are only used by tourists.

Parking prices are $2/hour or much more. Downtown is awful to drive or park in. I haven’t seen an increase in bike riding in the last ten years as San Diego has become much more bike friendly. We have the most biking-conducive weather but few bike commuters. Put a moratorium on any more car lane and parking space reductions and seizures! 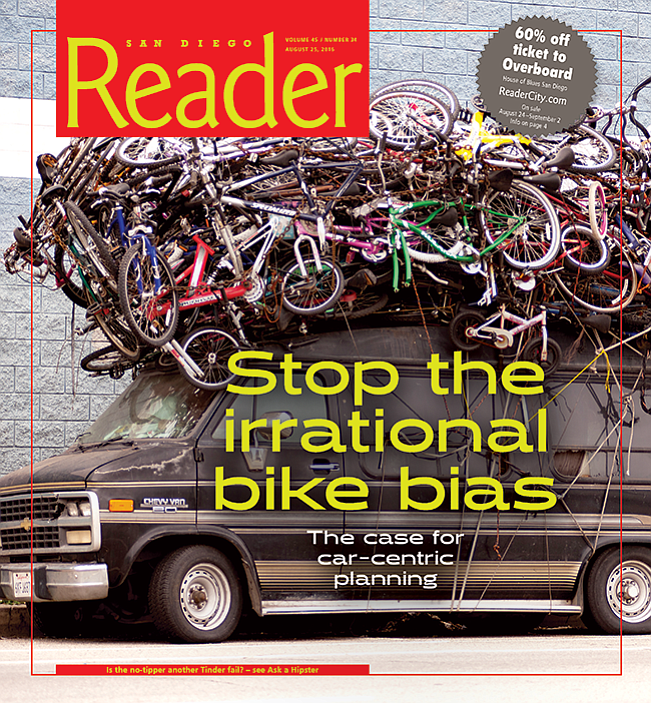 It’s quite ironic that the title leads to some very irrational arguments. Why do you let this cesspool of information radiate? You just can’t argue with stupid.

Quote: “Cyclists don’t pay for the use of the infrastructure they’re utilizing; there’s no ‘bicycle tire tax’ or anything like that.” Why this is irrational: They do. They usually have vehicles sitting in their garage, that they pay taxes and whatnot for. On another note, the author is essentially saying bikes put the same amount of wear and tear on the roads as cars. This is so far from the actual truth, that I have to keep myself from suicidal thoughts just to read on. I don’t want to live in this world, if people like Moss Gropen can take advantage of the public’s imagination.

That is just one example. Now who are you, San Diego Reader? Are you some factless, irrational, emotional, blogging center? I hope not, but this article proves otherwise.

As someone who has studied the smug, sanctimonious, and self-serving pro-cycling advocacy in San Diego, I applaud Moss Gropen’s cover story. I appreciate that the article touched on the demographics of cycling advocates who tend to be older, well-heeled white males, with plenty of time on their hands (think private golf-club types); however, the report stopped short of examining “feeder” generations.

For instance, from research I’ve seen, the retail bike industry is concerned that the ever-growing urban minority populations are not taking up biking for transportation or recreation, with economic indicators predicting a no-end-in-sight decline in bike (and bike-related) sales. These same analysts point out that female bike riders have yet to embrace cycling for workplace commuting, in large part because women tend to be the ones who ferry kids to and from day care/school, often detouring to run errands, many of which require the storage capability of cars (groceries!).

While today’s cycling supporters envision a future where bike transportation will be commonplace, it may be more likely that fewer children will learn to ride bikes, bike advocacy will depopulate, and bike lanes will disappear.

If the city is spending millions on improving bike-commuter lanes, and nobody is seeing the improvements as enticement to change to bike commuting, then the millions are a total waste. The money would be better spent on fixing roads where both cyclists and motorists could appreciate the repairs.

If the adults are not going to get on bikes anytime soon, spend future money on improved paths for middle and high school students. Sponsor high school racing clubs and education aimed at using bikes to stay healthy. Cycling is great seven days a week, and the future generation can learn to embrace that if the politicians and motorists refuse to change.

Even with the author’s admission of loving cycling, he seems to be missing the point of improving cycling infrastructure. Surely it isn’t just for the current one percent, but the other 99 percent to become happier, healthier cyclists.

You are all welcome to ditch your cars and join me on bikes. I’ll be waiting.

The transcription of Randall O’Toole’s anti-cycling arguments by Moss Gropen in the August 25 Reader gave me a little extra shiver of fear as I looked into the eyes of the irritable pilots of the 100,000-watt, 4000-pound steel cans surrounding me this morning while I man-powered my bike with the 150-watt output of my 61-year-old, 165-pound body.

I work with people studying how to help people that are too fat, have dementia, depression, and other metabolic disorders. The current plan for fixing this centers on finding new drugs, or convincing people to drive to the exercise place. Though health care spending continues to rise more rapidly than inflation, the problems listed above get worse each year. The current plan is not working.

Before I studied the brain, I studied geology. The current low cost of gas is due to a temporary one- to two-percent glut that resulted from the now-moribund U.S. fracking boom. It has immediately stimulated people to buy larger cars and drive more miles per year. By the end of this decade, however, the tiny one- to two-percent excess of oil produced beyond the 98-99% of world oil production that was used this year will be history.

The article correctly stated that Americans are not choosing cycling now. Why not beat the crowd? Pay no attention to Gropen/O’Toole!

I cycle about six miles to work every day. One way takes about 22 minutes. I wait at all the lights, cycle fast and respectfully, don’t shower (or stink), and I never yell (even though I get yelled at on some days), because I just don’t have the rage! Won’t you join me (Johnny LaRue voice)?

I’ll admit, in regards to the cover story on August 25, “Stop the Irrational Bike Bias,” I’m a little shocked you allowed such ignorant dribble to be published. Or that you published something clearly influenced by a personal bias against the subject (“The only people who might be smugger than cyclists are vegans.” Really?)

I can butcher every point made, but for the sake of length I’ll attack only two. The first is the notion that cyclists do not pay for the roads they’re using, a statement that not only seeks to stir malice toward cyclists by painting them as freeloaders, but is also unequivocally false. Local streets and roads are largely supported through general taxes; these are taxes everybody pays and not the levies placed upon motor-vehicle ownership. And while almost all road wear-and-tear is caused by motor-vehicle traffic, cyclists and pedestrians account for little to none of it. I don’t own a car, and yet here I am paying taxes every year to repave the roads you’re destroying. You’re welcome.

I also find it incredibly odd that the article argues against government subsidies for transportation infrastructure and yet motor-vehicle usage (highways for example) is massively subsidized.

The second statement is that “Cyclists, who tend to be well-educated, affluent, and liberal meaning know how to use the political process to get what they want.” I’d ask Mr. Gropen to define “cyclists.” Being there are clearly large demographics that commute via bike that don’t fit this definition (i.e., students), that statement comes across as a baseless low-blow against an incredibly varied demographic. The truth is that the vast majority of individuals in the United States who utilize bikes for commuting purposes and benefit the most from increased infrastructure are the working poor and first-generation immigrants — not the weekend warrior on the $8000 Pinarello, but Dave, Amir, or Juan who uses their $100 junker to get to their job as a dishwasher on time.

Arguing against pro-cycling measures hurts the most vulnerable members of our society the most. It also hurts me, because when people stir anti-cycling measures and paint us as selfish, smug freeloaders who milk the system, they’re propagating the air and the environment that may very well cost me my life one day.