After nearly ten years of hoops-jumping and opposition 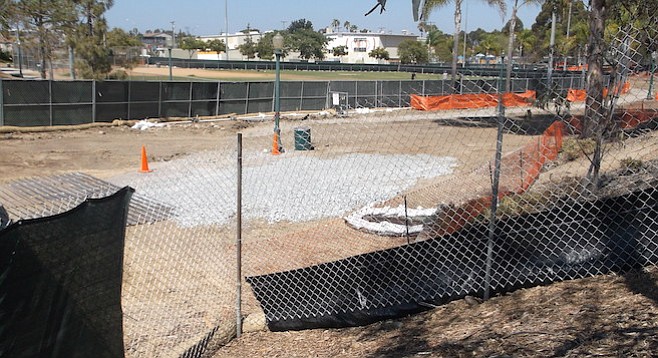 Construction in Park de la Cruz in City Heights, a neighborhood starved for parks, finally began last week after years of wrangling over the disorganized area south of Cherokee Point Elementary School, west of I-15.

For years, the area of streets that dead-end have had patches of green south of the school and across the Copley YMCA parking lot to Park de la Cruz. The current construction will create a greenway connecting them, as well as a long-sought skate park, according to plans. In the mix is the old Copley YMCA building, left empty when the Y moved to its new building on El Cajon Boulevard in early 2015.

The city has decided to use the building for a new community center and gymnasium, according to parks-department memos. The community had asked the city to make sure that Cherokee Point Park and Park de la Cruz — which both touch the old Y site — are connected.

Diana Ross, executive director of Mid City Community Action Network, said the project has been on the table for nearly a decade.

"I was amazed how long it took; the hoops and quite frankly amount of opposition the Mid-City CAN Youth Council encountered was shocking — it only made sense to me that City Heights needs a skate park," she said, noting that the project came together after a skateboarder was hit and injured on the street.

"We spent four years advocating," Ross added. "Only after countless city-council visits, several rallies with more than 300 community members, and a health impact assessment — with the support of several foundations — did it finally happen."

The first phase of construction includes the greenway and the skate park, which will be constructed by California Skateparks, an Upland-based company that won the bidding on the first phase of the $5 million project.

Plans include two bowls — one five feet deep and one nine feet deep — at opposite ends of a corridor in the half-acre section of skate park.

The company is also tasked with adding small plazas with shade for picnicking and hanging out, plus new trees.

Some of the biggest improvements come in paths that are ADA-approved from the Landis Street pedestrian bridge over the I-15 to the new park, as well as improved access to the two parks and the greenway in between. Two thirds of an acre of pavement in the Copley parking lot and on the adjacent street will be converted to grass and trees that help connect the two parks.

"It's going to be cool," said Enrique Ramirez, who was riding his bike on the high, narrow path between two chain-link fences at the south end. "My family lives in an apartment and my brothers and I get outside as much as we can. It'll feel more peaceful here than before."

The second phase of construction, not yet scheduled, will involve converting the old Y into a community center and gymnasium.

Resident Stephanie Napoli said that she loves the project but is concerned about how the city government and community will maintain it once it's finished.

"For our community, maintenance is a challenge," she said, mentioning a jungle gym in Park de la Cruz that is in "horrible disrepair.... They no longer include maintenance in the project, and that's very important to these public spaces, that they stay clean and safe."