San Ysidro will check its own dang air quality

Community leaders not satisfied with monitoring by government agencies 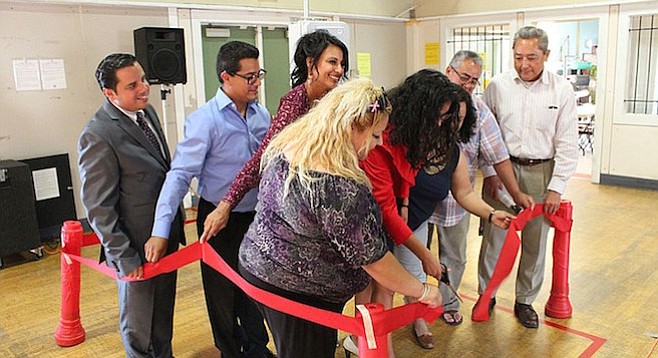 San Ysidro has three freeways cutting through it. The approximately 29,000 residents also live next to the largest land port of entry in the world — an estimated 50,000 vehicles cross the border daily. It’s no surprise, therefore, that back in October 2014 the San Diego Association of Governments reported the South Bay had a 17.8 percent higher rate of asthma and a 20.1 percent higher rate of chronic obstructive pulmonary disease than the rest of San Diego.

In February 2015, the U.S. Environmental Protection Agency and the San Diego County Air Pollution Control District placed an air-pollution monitor on a rooftop at the port of entry. The EPA provided $110,000 in funding to study the air quality.

After 14 months, the monitor had to be moved from the rooftop to a parking lot. In a phone interview with Bill Brick, chief of monitoring and technical services division at the air-pollution control district, he said the monitor went offline for a few months because it took time to get electricity at the new location. Last week, the agency was told by the General Services Administration that due to construction, the monitor would have to be moved again.

Brick did say some preliminary findings were available. The monitor located at the port of entry and the monitor they have at Donovan State Prison “tend to both kind of go up and down together, even though one is closer to traffic.... We’re getting quite a bit of impact on certain days from Tijuana.”

San Ysidro residents haven’t been satisfied with only one monitor and, with the help of scientists and several organizations — including the California Environmental Protection Agency and Casa Familiar — they created a community-based air-monitoring study. 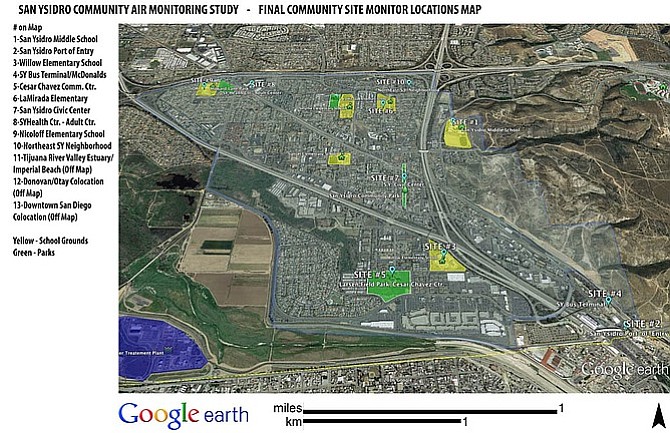 On Friday, August 26th, a community steering committee consisting of ten San Ysidro residents gathered at the San Ysidro Civic Center to unveil 13 strategic locations to place the monitors. They will be installed at four schools and two trolley stations, near the freeways and at the border.

Brick explained the monitors will be an experiment to see if communities can effectively assess their own pollution using low-cost monitors. The county uses EPA-certified monitors, which during manufacture go through an intensive process to test for accuracy and stability; these monitors cost hundreds of thousands of dollars.

San Ysidro, on the other hand, will put up instruments that do not have these quality controls. As a consequence, 3 of the 13 monitors will co-locate with the county-monitored air-pollution equipment in order to compare results.

Vanessa Galaviz, associate public health scientist at the California Environmental Protection Agency, explained at the unveiling, “We are making efforts to co-locate at Downtown, Donovan, and San Ysidro. Co-location is important for validating the community monitors to ensure accuracy of the data.”

Imperial County is conducting a similar study using the same low-cost monitors and preliminary results show they are 80 to 90 percent accurate.

Once the study is complete, Galaviz says the air-monitoring data will help provide information needed to prioritize improvement in public health and potentially provide data for CalEnviroScreen. Accounting for cross-border pollution in CalEnviroScreen ensures accurate identification of disadvantaged communities, which are then eligible for Cap-and-Trade funds.

So? What are they (gov't officials and minions of San Ysidro) going to do about it? The freeways will not be shut down. The port of entry will not be shut down. San Ysidro is part of the City of San Diego kind of a bastard child of San Diego. San Ysidro costs the taxpayers of San Diego much more that it provides value. The pollution is high, the crime is high, the traffic is terrible, illegals are high, homeless population is high. The only thing that is low is the income of the residents. There is no solution to any of the problems that are present.

Actually, it's the other way around, Alex. San Ysidro provides a lot of money for the city. The city then takes that money, and people in these parts feel the city puts the money elsewhere, rather than investing back into San Ysidro.

Example: the Las Americas Mall gets millions of visitors each year who put $$$$ sales tax dollars into city coffers.

Another example: the San Ysidro Trolley is the ONLY revenue generating stop of the entire trolley system.

The GSA is reconfiguring the border and more lanes are suppose to open in order to relieve traffic. The government could also fund an upgrade of roads in San Ysidro, so that more public transportation is available.

Also, crime in San Ysidro is another stereotype that is incorrect. The Southern Division of the SDPD will tell you crime has been relatively low for many years. There are approximately 2 murders each year for the entire Southern Division.