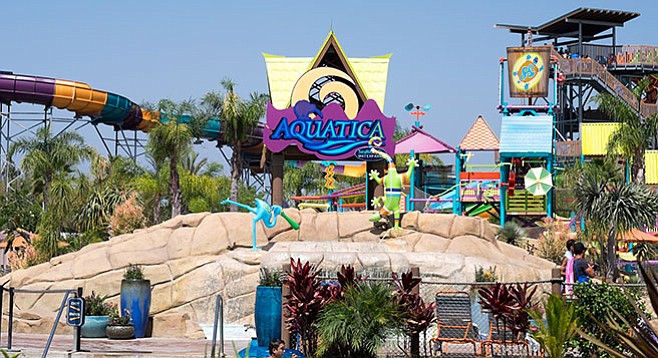 As summer temperatures soar, crowds flock to SeaWorld-owned waterpark Aquatica, which sits in the Otay River Valley in southeast Chula Vista two miles east of Interstate 805. The Australian and Kiwi-themed water park, next door to the Sleep Train Amphitheatre, opened in 2013 after SeaWorld purchased what was formerly known as Soak City Water Park from Cedar Fair Entertainment, owner of Knott’s Berry Farm. 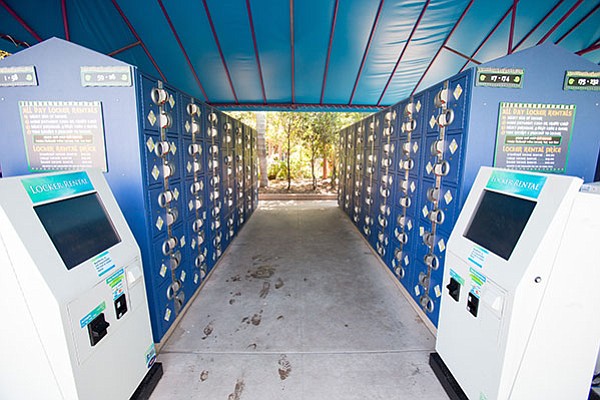 After paying the price for admission (ranging from $39 for adults to $33 for children over three years old), families amble past four rows of dark blue lockers. These aren’t one-dollar aiport lockers — they cost $12 for a standard locker, roughly the size of a children’s shoebox, $15 for an 8-by-11-inch locker, and $25 for a locker large enough to cram in a backpack. Perhaps put off by the high prices, most don’t stop at the lockers. Kids yank their parents’ hands, pulling them toward kiddie areas such as Slippity Dippity and Kata’s Kookaburra Cove. Teenagers race barefoot to the top of the Taumata Racer, a 375-foot green, yellow, and blue slide. Parents scour the sandy beach next to the Big Surf Shores for shaded lounge chairs where they can set up camp.

Meanwhile, thieves survey the scene and wait for parkgoers to drop their belongings and head off to the slides.

Since SeaWorld in 2013 acquired the park, a rising number of park guests have complained about stolen items and mediocre security.

In that time, public documents obtained by the Reader indicate that the Chula Vista Police Department has received 22 reports of larceny at the park, 17 of which were thefts of $400 or greater.

According to police spokesperson Barbara Brookover, no arrests have been made and the cases are no longer active. “Each case has been suspended. A suspended status means that there are currently no investigative leads, but the case will be investigated should additional information become available.”

But the 22 reported cases are only a fraction of the actual number. Most incidents are not reported to the police department and are handled solely by Aquatica’s in-house security. 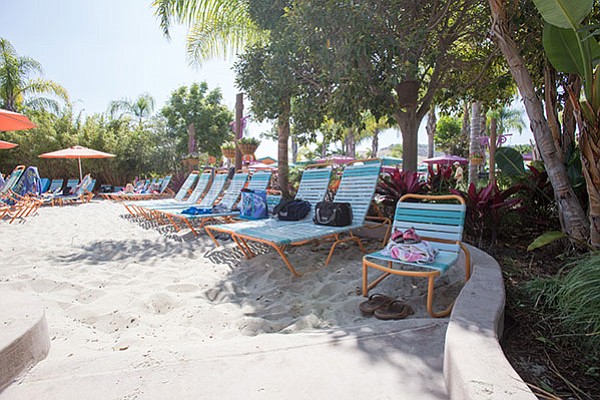 “I came back to our lawn chair and my bag was gone.”

“Aquatica is a thief’s paradise,” says Imperial Beach resident Todd Westfall. “I stuffed my clothes, cell phone, money, car keys, the bare minimum for a day at the waterpark, into my tattered, old red backpack and went off to splash around with my daughter. I came back to our lawn chair and my bag was gone.”

Westfall, a Reader employee, headed to Aquatica’s small security shack in hopes that the bag had been returned. On the way he saw his red backpack thrown in the bushes. His clothes and other non-valuables lay strewn around it. Missing from the pile were the keys to his car, cell phone, and cash.

“The thief was so brazen, he looted and discarded my stuff right in front of the security office,” Westfall says. “I flagged down a security employee, and he started taking my report.”

Once finished, Westfall says, the guard retrieved a large three-ring binder from the shelf and placed the sheet of paper at the back of the pile.

“That binder must have been — and this is no exaggeration — five inches thick. It was stacked full of similar reports,” Westfall says. “They could not have been less helpful. There was never an apology, help, nothing. It was as if I was bothering them to inquire about my stolen stuff.”

Westfall is not the only victim.

“We had a great time, enjoyed all the rides and had a great place to take rest away from the madding crowd,” wrote one yelper of his June 22 visit. “The only unfortunate thing was the theft of my daughter’s wallet at the Wave Pool. She made the mistake of bringing all her graduation money with her. The thief must have been watching them since the rat rummaged through a backpack hidden under their beach chair. The thief took the wallet and left the open backpack atop the beach chair. She did not notice it was missing until long after closing time. Called Aquatica ‘Lost n Found’ and nobody had turned it in. Management do you have [closed circuit television] surveillance cameras?”

Aquatica did not respond on Yelp! Nor would a spokesperson for SeaWorld provide details on park security. “While we do not comment on the specifics of our security operations or procedures, it is a responsibility we take very seriously,” said David Koontz, communications director for SeaWorld San Diego.

“We maintain a very active security presence in our parking lots, at the park entrance, as well as inside the park. We also work closely with local law-enforcement agencies on park security and safety procedures.” 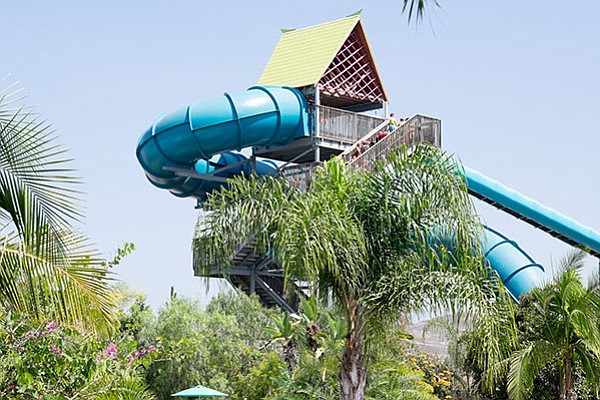 Fun — not securing valuables — is foremost on parkgoers’ minds.

Water parks present easy targets for thieves. Park visitors are forced to leave their smartphones, keys, cash, and credit cards in dry places. For those who choose not to rent lockers, the items are typically placed in a bag and stowed underneath a chair. And while no major theft rings have been uncovered in San Diego’s Aquatica, SeaWorld’s sister water parks cannot say the same.

In April 2015, a woman was arrested after pillaging unattended bags at an Aquatica in Orlando, Florida. In addition to stealing credit cards and cash, the woman and her accomplices stole three cars during the heist.

At Aquatica San Diego the problem seems to be on a slightly smaller scale.

Last year, during one of their visits, thieves raided Gillard’s son’s backpack and stole his new iPhone. While Gillard feels that more could be done to prevent thefts, the responsibility inevitably falls on the individual to safeguard their belongings, he says.

“This stuff happens no matter where you go. It’s human nature. Probably some slimy little kids who were walking by and saw an unattended backpack and decided to rummage through it. We talked to security and they were super helpful. They filed a report and then contacted us when the item didn’t turn up.

“While I think Aquatica can probably do a bit more to ensure that thieves can’t just stick their arms through some bushes and snatch a backpack, it’s up to the individual to secure their belongings. We bought a season pass again and now we make sure to rent a locker. You live and learn. We learned to lock up our $700 iPhone the hard way.”

It sounds like their security staff is just one step above Sheriff Andy and Deputy Barney Fife!

Lock your stuff in your car and keep the key. Who doesn't know that?

No matter what they're offering -- irritable orcas with sunglasses or bacterial waterslides -- Sea World manages to rip off their"guests." Definitely need to rename their Lost and Found because nothing lost there is ever recovered. And how about a lower fee and bigger size for those self-service lockers? The prices are outrageous. Otherwise, I would just remind Sea World customers about the 10-year-old boy who was decapitated last week on a poorly-engineered super-tall Kansas City watersilde. Caveat emptor.

Mea culpa. As if by magic, yesterday's Los Angeles Times travel section had a letter from a Sea World patron who refuted my claim about the company's Lost and Never Recovered department. The writer's daughter's missing wallet turned up at the Sea World Lost and Found.

Parents are supposed to have good judgement. They wouldn't go on a ridiculous ride but they let their young children go alone.