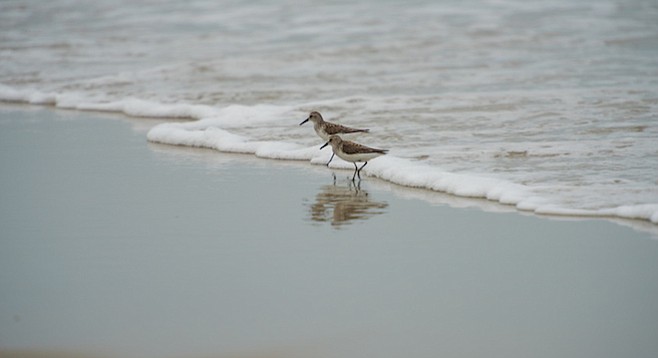 San Diego's Warmest Weather, on average, should occur in August through early September, according to statistics compiled from several decades of measurements taken near the San Diego International Airport. In an average year, coastal residents enjoy an average daily temperature of 70 degrees. which compares favorably (depending on your viewpoint) with the January average daily temperature of 55 degrees. The range between the high and low is typically 10 degrees or less this time of year. August's warm, semi-tropical weather will eventually give way to September and October’s slightly cooler days interspersed with occasional heat waves brought on by Santa Ana conditions — dry, hot winds that sweep down the mountain slopes from the interior.

Various Sandpipers are now being seen in considerable numbers within San Diego County's coastal wetland habitats and along the ocean beaches. Some have just arrived from the north, others are juveniles that have bred locally. You'll find sanderlings and willets scurrying along the wet sand on the beaches. Several other members of the sandpiper family can be found in mudflat areas such as the Tijuana River Estuary, the south end of San Diego Bay, the San Diego River flood channel near SeaWorld, and the margins of most North County lagoons.