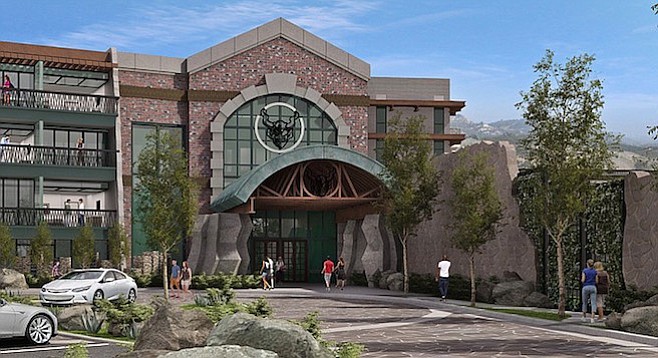 Stone Brewing has announced its longtime plan to build a hotel next door to its Escondido brewery will finally come to fruition.

First reported in the Reader back in 2011, Stone Hotel was to be "an intimate 50 room venue" adjacent to its World Bistro & Gardens restaurant. However, the brewery prioritized investing in myriad other expansion plans in the intervening years and chose not to develop a hotel itself.

Instead, it will license its brand to the San Diego–based Untitled Hospitality group, which will develop and operate a full-service 99-room hotel. Untitled will build the estimated $26 million, 100,000-square-foot project in conjunction with San Diego developer McMillin LLC. It's expected to open early 2018.

“You can’t rush a good thing,” said Stone cofounder Greg Koch via press release. “After originally envisioning a hotel on the property more than six years ago, we had put the project on permanent hold due to our need to focus on our core obsession of brewing."

Early in the hotel planning, Koch consulted with Robert Cartwright, a 20-year hotel and hospitality veteran who has developed and managed hotels on the East Coast and Chicago for several large firms. A year and half ago, Cartwright, an avowed Stone fan, decided to pick up the project himself.

"I am a total nerd, and I have loved Stone and everything they've stood for since I lived in San Diego, 15 years now," says Cartwright. While he founded Untitled in 2015, along with partners Dan Klunk and Hopi Stradling, in part to develop the Stone property, which he describes conceptually as being an "upscale kickass hotel."

"There are so many hotels that are all the same," Cartwright adds, "There's nothing cutting edge and different and unexpected…. The whole philosophy of Stone is they challenge the status quo and I want that to be part of this experience."

The plan for the hotel includes nearly 60,000 square feet of indoor and outdoor events space, a fitness center, three bars, and in-room growler delivery. Award-winning design and fabrication firm Basile Studio will contribute to the look and feel of the hotel, said to involve custom-designed furniture and floor-to-ceiling windows.

The company estimates over 500,000 people a year visit the brewery and restaurant, with 50,000 taking the brewery tour. However, only a handful of budget-hotel chains operate within a three-mile radius of the brewery, limiting the options of beer tourists — and their designated drivers — wishing to visit Stone and other north county breweries in nearby Vista and San Marcos.

Looks like the hotel will be a big hit! Maybe North Park should do something like that.

Letter to the Editor

Props to Stone Brewing for moving forward with their hotel-I would only caution Msr's Koch and Wagner count their fingers after shaking hands w/developer McMillin Co's. Based on some of their bait and switch, back channel dealings, golf-cart size parking [email protected] Station, Stone should ride McMillin like a Schwinn bike, otherwise they may end up with downsized rooms and maybe a conference room dedicated for exclusive use for some evangelical church. Peace be with you all!