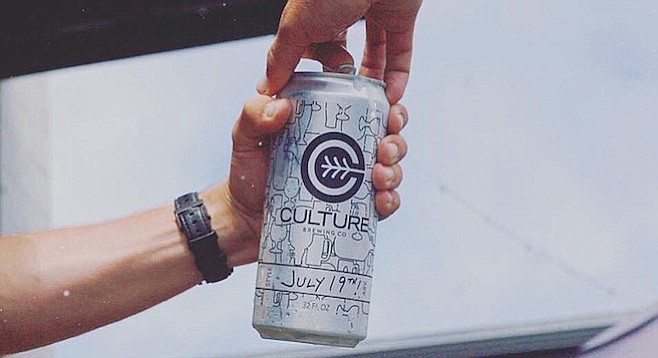 Culture Brewing Co. has a thing for beach communities. The Solana Beach brewery has been pouring beers for more than three years on Cedros Avenue and for nearly two years at its tasting room in Ocean Beach. Now the brewery has tentative plans to establish a third location, a tasting room in Encinitas.

"We're still in the permitting process with the city," says Culture marketing manager Zach Smith. Aside from Lost Abbey's Cardiff tasting room, there isn't any brewery presence within Encinitas, so getting city approval isn't a given. "We should hopefully know within the next month whether or not that space comes to fruition," Smith adds. "If everything goes according to plan, we could be open by January or February."

But that doesn't mean Culture is waiting around to serve the Encinitas community — the brewery began selling beer at the Wednesday-night farmers' market at the beginning of August. Since state law only allows for packaged beer to be sold at farmers' markets, Culture is offering five or six different beers each week in 32-ounce cans.

Make that crowlers. Culture invested in a crowler machine for its Solana Beach location. Typically, this allows beer to be canned on the spot for customers ordering fresh beer to go, but using the machine to pre-fill crowlers allows the brewery to sell packaged beer without committing to a full bottling line.

"We really like to come into a neighborhood and make ourselves a part of the culture," he explains. "We don't distribute. We don't want to sacrifice anything for scale…. We'd rather invest in having a really great team and great product than to see us in every 7-Eleven."

Which isn't to say the brewery isn't making more beer. Head brewer Mitchell Wix says demand has doubled at the O.B. tasting room in the past year, and Culture has added a pair of 20-barrel fermenters to boost capacity of its 10-barrel brewhouse. Wix has also started a barrel program in O.B., where he hopes to release bottles of golden sours and flanders red ales sometime next year.

The brewery has left room for further expansion as well. Smith says the company is already on the lookout for a fourth location, though this one may be closer to a bay than a beach: Culture hopes to open a tasting room in downtown San Diego by the end of 2017.

The Encinitas farmers' market is on NCTD property. When did NCTD start permitting the sale of alcohol on the property? Is that a no, no? Who's liable - the city or NCTD for any incident involving the alcohol sales? And 32 ounce beer cans is one big gulp at a 7-11. Mayor Gaspar and Councilman Tony Kranz are staunch supporters of alcohol outlets.