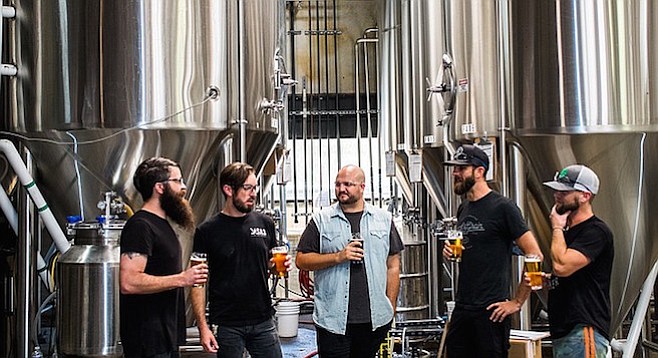 Brewery culture in San Diego shares a number of similarities to its indie rock scene. Fans claim their favorite bands and breweries with graphic T-shirts and stickers. Beers are discussed and dissected like new records, with street cred given to those familiar with the obscure or hard-to-get. And while photos of brewers may not quite poster the walls of fangirls' bedrooms, many do boast a name recognition similar to local rock stars.

So while the idea of breweries and bands working together to craft beer may sound like synesthesia run amok, as cross-promotion goes, it makes enough sense that the trend has been gaining steam.

Thr3e Punk Ales launched last year with rocker collaborations in mind, and has already teamed with successful local bands from the '90s. Thr3e Punk worked with Unwritten Law to create a beer called Unwritten Lager, and a Sprung 4 Life IPA collaboration with Sprung Monkey has become a part of its core lineup. Sprung Monkey drummer Ernie Longoria said, "I was thrilled that they were keen on me being hands-on with the development… from the flavor profile of the beer, the name, and how we would market it."

Currently building out a downtown Chula Vista brewhouse and tasting room, Thr3e Punk already has more punk collaborators lined up for the year ahead, including longtime Huntington Beach band the Vandals, and the Bouncing Souls out of New Jersey.

Other breweries and bands have picked up on the idea this summer. In June, hardcore act Poison Headache brewed an IPA in tandem with Coronado Brewing to celebrate the release of its eponymous debut album. "We knew each other from the old days of doing band stuff," recalls Coronado head brewer Ryan Brooks, who said his musician friends were keen to brew the style of juicy, tropical IPA currently in vogue among hopheads.

Bandmember Phil Sgrosso mentions the goal was "To team up and brew something that reflected the attitude of the music." Named for the Poison Headache song Hail Colossus, the resulting Ale Colossus features a combination of citra, mosaic, and southern cross hops. "We're a three-piece band," Sgrosso adds, "so incorporating a power trio of hops felt very appropriate."

In late July, North County favorite Dead Feather Moon got together to brew a beer with Saint Archer to celebrate the release of their latest album, The Finder. This collaboration makes more immediate sense as several members of the band have direct connections to the beer industry. Most notably, frontman Justin Berge works as beer buyer for Rancho Bernardo bottle shop Brothers Provisions, and multi-instrumentalist Greg Peters happens to be Saint Archer's cellarmaster.

"Picking a style that everyone wanted to brew was definitely a challenge," Peters notes, adding they opted to brew a session ale because "one thing we all have in common is the propensity to consume large volumes of beer."

Since their music is rooted in traditional American and English rock traditions, Dead Feather Moon brewed with English malts, a hybrid English/American Ale yeast, and a mix of American and English hops. The Finder Session Ale will be served at the band's August 12 record release party at the Belly Up.