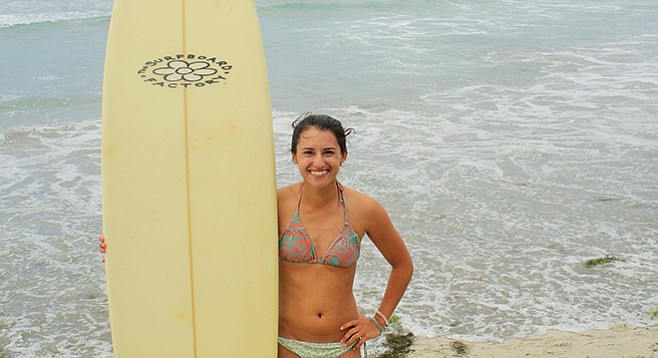 Kelsey Gonzalez is moving to Texas in one week. She is trying to get into the water as much as possible.

“I know I am going to miss this,” the California native sighs.

Gonzalez’s mom used to push her into waves and encourage her to surf the white wash. Her mom later took her to Bali on a surf trip.

“I used to wear this shirt all the time that said, ‘My mom surfs better than your dad,’” Gonzalez chuckles.

In 20 years of surfing, Gonzalez has avoided injuries. “I collided with another surfer out there once. I don’t really know what happened. It might have been my fault.”

Gonzalez prefers longboards. “I have a shortboard, but longboards, I think, are more fun. I like to just cruise.”

The only San Diego beach that Kelsey avoids is Mission Beach down by Belmont Park. “It’s way too crowded, way too many tourists. The etiquette just is not there at all. Rule of thumb usually is, if someone is on a wave first, they get it.”

Gonzalez’s favorite surf moment occurred off La Jolla, “I was surfing at sunset and there were dolphins riding the waves with me. It was so pretty.”