Overdoing it at Oscar's in Baja La Jolla 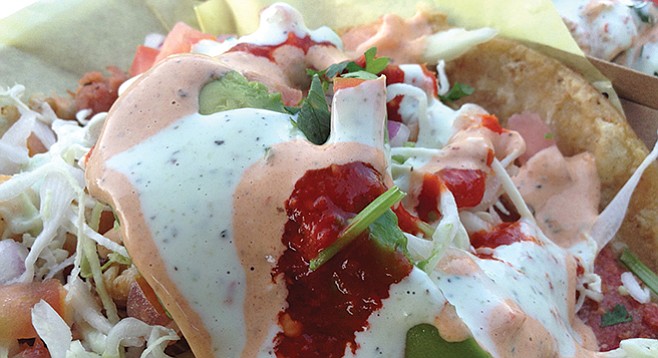 I really want to know. Lord knows I’ve bounced by here often enough in the #30 bus.

Mike and his lady Rachel and me and a dozen other people are sitting on stools along the sidewalk here on Turquoise, noshing away with burritos and tacos and fish stews. The food’s spread along two rows of inches-wide shelves.

It’s all happening outside this tiny eatery, the nearest thing I’ve seen to an actual hole in the wall. There’s a smoke shop, wall, and then there’s this sliding glass door, and through it, a tiny space. Just room for a menu on the wall, an order counter, a narrow kitchen behind.

“Where are we? In the borderlands,” says Mike. “Between La Jolla and Pacific Beach.”

“We call it ‘Baja La Jolla,’” he says. “Also, you’re at the headquarters of the best fish tacos in the county.”

Mike should know. He used to live nearby.

He and Rachel are gnawing into mahi mahi tacos oozing with avocado and salsas. 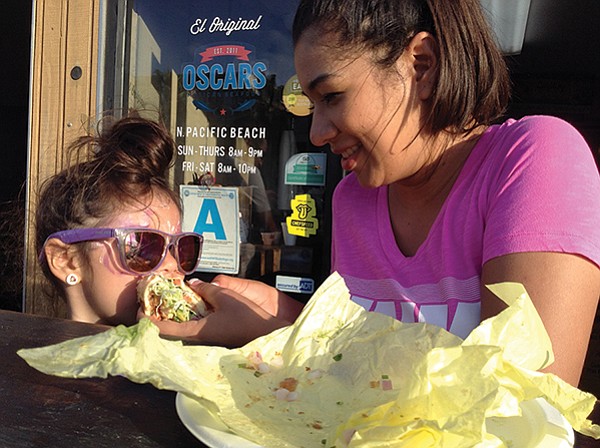 At least she takes a bite

“Eat your torta,” says this guy Lance to his four-year-old daughter Eva. She ain’t interested. “Get her back to the motel and she’ll be starving for Pop Tarts and cookies,” he sighs.

He and Jackceny his wife are munching these dee-lish-looking seafood tortas, with oysters and scallops and a ton of other things inside. His brother and his son Chandler, too. Except Chandler’s got steak in there instead of oysters. I think each one costs $11.

There’s already a small crowd in line to get in. And this is sunset on a Monday.

How come I have never noticed this li’l place? Fact is, even walking past, you see West End, the pub, and you see Pernicano’s Pizza House, and you see the big sign for the Smoke Shop, but who notices this little ramp with the split-level plank counters, and just an anonymous sliding-glass door? 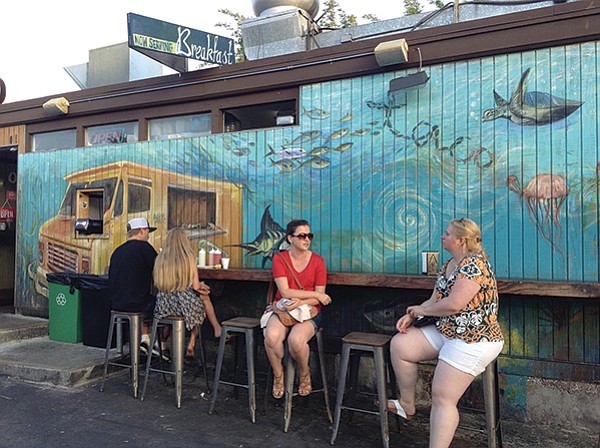 I see no big signs, except for one saying, “Now serving breakfast” above a big mural depicting a food truck parked, uh, underwater with fishes swimming all around it.

I had to check it out. Inside, standing-only space for, like, four people, and because you see the line growing right behind you, you realize you’ve got to order fast. But what to order? By the time I get to Gabriela, the gal behind the counter, I’ve heard a couple of people ordering the “Taco Especial,” which has smoked fish, shrimp, and scallops or octopus, plus the fixin’s: avocado, cheese, cabbage, onion, tomato, and cilantro. Now there’s a taco. Costs $4.65. So I ask for that. Almost get a smoked-fish taco, too ($4.65), or the grilled-octopus taco for $4.75.

I mean, there are lots of other really interesting things I could have had, like “Torta de Oscar,” a surf & turf deal with smoked fish, spicy shrimp, skirt steak, and the fixin’s for $10.50. Or a bluefin tuna ceviche served in a cup with avo and two tostadas ($7.99). 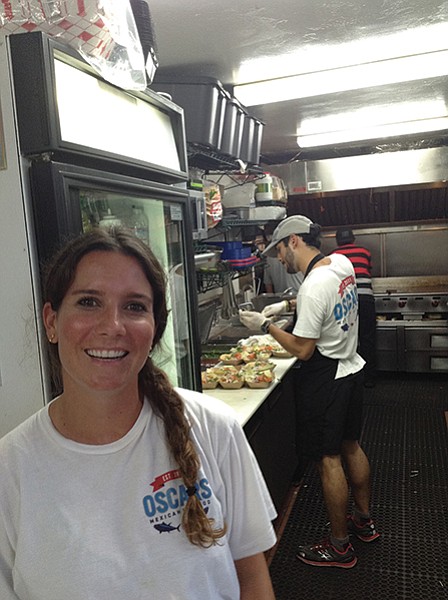 Gabriela at the order counter and the kitchen in action

For some crazy reason I order the large. And when Gabriela calls out “Number six!” the number on my receipt, I realize I’ve gone way over the top, pricewise and quantity-wise. Because this is one big polystyrene pot. And actually, it is more like a soup. But, yes, rich in fish, a-swill with veggies.

I’ve never been that much into fish. They often look great but don’t come through with flavors to match. Yet now, when I copy Mike and squirt red hot sauce, pink chipotle, and a white kinda cucumber salsa, all over both tacos, they turn them into luscious wet, zingy li’l chews full of flavor. And with the Especial, you get the added tang of the smoked fish.

And besides, you know this food is basically good for you. It’s all so fresh.

And eating out here? It is a curious pleasure. Something about all us people, sitting in these two rows, along these crazy narrow planks. It’s out in the open but totally intimate. Elbows knock, eyes lock, conversations overlap. It’s like the quiet mumble of feeding time at the zoo. Or, I’m thinking, like Pokémon GO fanatics gathering at some unlikely spot, together, but heads down, trying to find the monsters.

“Why’s this place so popular?” I ask Gabriela, as she packs the unfinished half of my fish stew for the risky trip home. “People love these tacos,” she says. “I’m from Brazil. We don’t have tacos down there. We do lots of rice and black beans. But people say these tacos are the best. You should see the lines outside on a Saturday night.”

Good news is I call in to the West End pub 20 yards down. The barman says, sure, no problem to bring food in from nearby places.

So, next time, grab that Taco Especial, and we’re off to the West End for a wee dram of PBR.

Or would I miss sitting on a stool in the middle of the street, eating fish stew from a shelf?