The day trips are a welcome break from bustling, smoggy Shanghai. 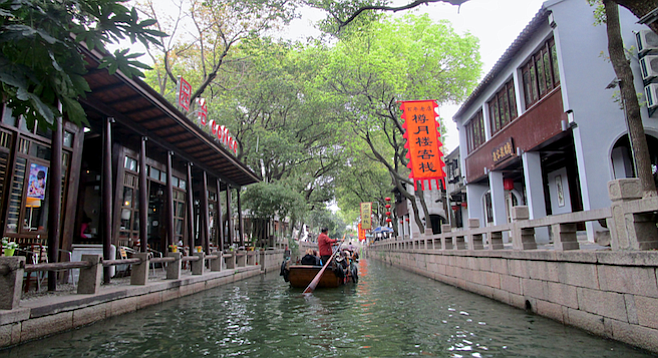 Shanghai is the most populous city in the world, and it can become a bit overwhelming for both visitors and locals. If you’re living or visiting here for any length of time, you’ll welcome a respite — a day trip to a smaller, quieter, more serene locale.

We decided to day-trip from the hectic, smoggy “Paris of the East” to the simpler, ancient pleasures of the “Venice of the East”: Tongli, an ancient water town complete with canals and gondolas. We also stopped by the town of Suzhou, with a heritage dating back 2,500 years.

Long considered China’s silk capital, Suzhou is located in the middle of the Yangtze delta on the Silk Road, the ancient passageway between China and Europe.

The creation of the Grand Canal nearly 1,400 years ago provided a means by which silk could easily be shipped to Beijing, and Suzhou gained traction as a favored town for intellectuals and merchants. 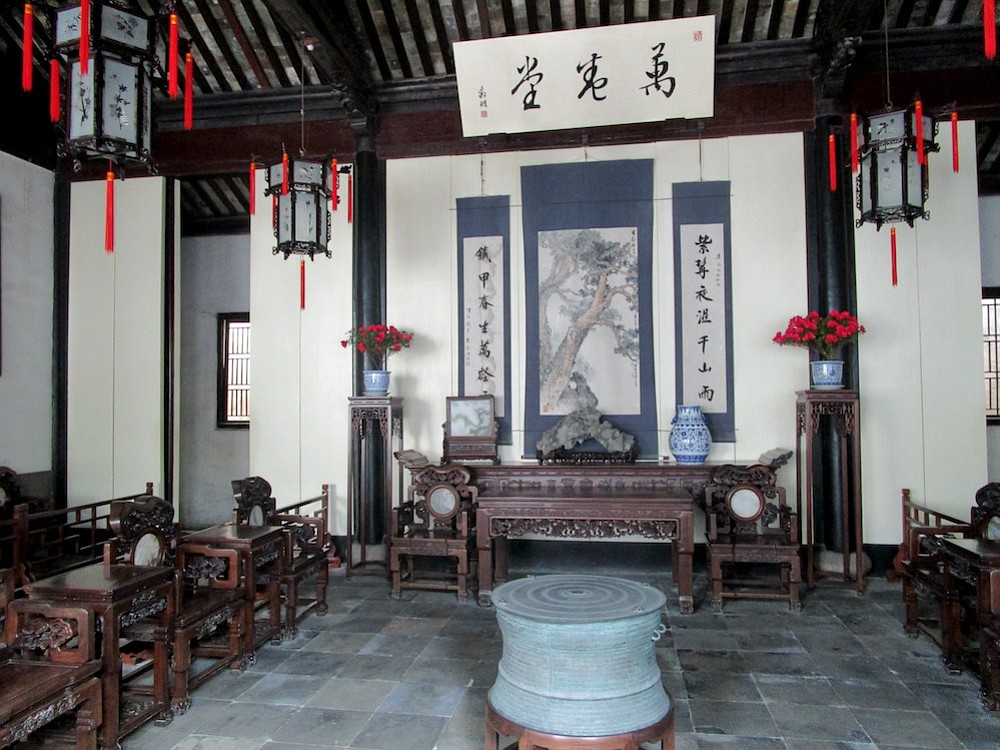 Our first stop in Suzhou was the Garden of the Master of the Nets, a UNESCO World Heritage site and considered the finest garden in Suzhou. The site dates back to 1140 and adheres to the Chinese tradition of humble, yet refined residences with serene courtyards and gardens. Corridors and pavilions connect the central garden to the residence. The traditional Chinese garden is small, and in the Taoist tradition, it aims to produce a state of tranquility leading to contemplation and spiritual enlightenment. 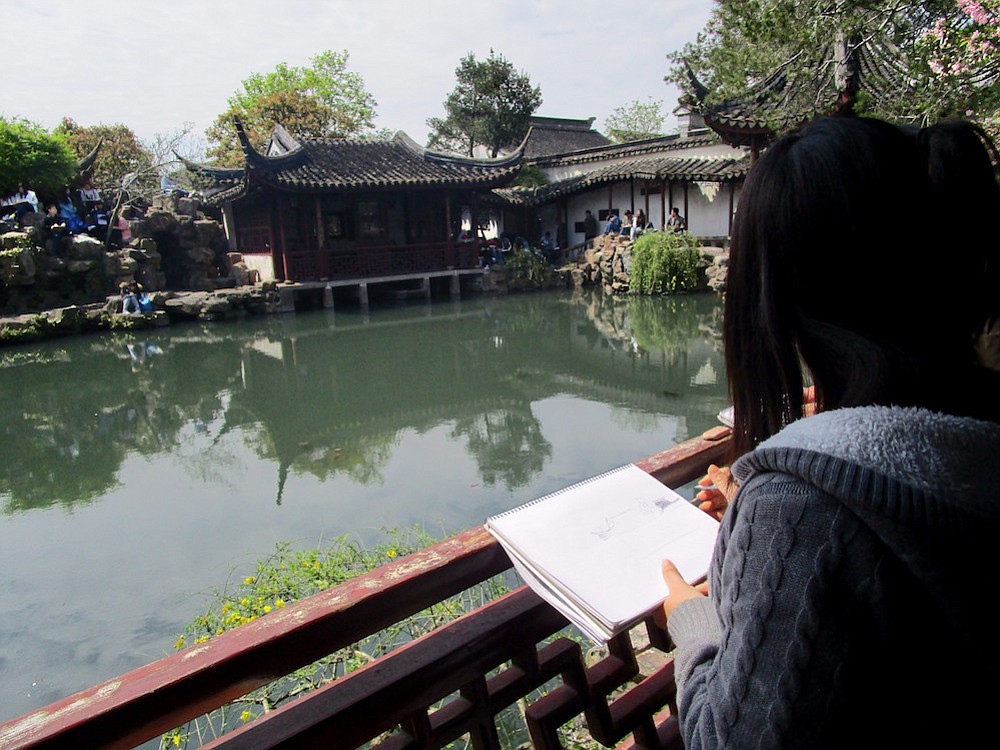 Art student at Suzhou's Garden of the Master of the Nets.

The residence surrounds a pond-like central lake, designed as a framed landscape with water. It was a tranquil refuge after a few days navigating the hubbub of Shanghai. Here several art students were gathered producing lifelike sketches and watercolors.

The interior rooms were elegantly designed with careful planning consistent with feng shui. The decorations of cranes and dragons were supposed to bring good luck. A library and calligraphy room suggested the intellectual and artistic refinement of the owner. The most well-known building in the complex, the “Pavilion for Watching the Moon,” provides a vantage point where the moon can be admired in the water, a mirror and the sky simultaneously.

Next we visited a silk factory, the Silk Spinning Mill, to watch the process of silk produced from silkworm cocoon to fine silk products. It’s been churning out silk products since 1921. We were shown the difference between silk and fake silk (polyester), which is quite tricky to distinguish.

After departing, we were also shown the difference between legitimate Chinese bills and fake currency. Someone in our traveling party was slipped some counterfeit Chinese bills.

Today, the Beijing-to-Shanghai railway passes through Suzhou and can deliver you there from Shanghai in 29 minutes (not 30, mind you). Suzhou is also known as the Land of the Fish and the Rice, but as my guide pointed out, it’s now more like the land of concrete: the rice paddies have largely disappeared. Locals eat plenty of fish, though, and they especially enjoy shrimp and prawns. Chinese love to deep fry and eat the shrimp heads and the shells.

The popular Mid-Autumn Festival, one of the four most important festivals in China, is renowned for its mooncakes, traditional desserts produced in Suzhou.

Architecture buffs may be interested to know that I.M. Pei, the internationally famous architect, was born in Guangzhou, south of Suzhou. His forbears lived in Suzhou for many years, however, and he’s revisiting his roots by agreeing to design the local art museum.

Everybody’s heard of Venice, but Tongli, on the outskirts of Suzhou, is even older. Tongli dates back to the Tang dynasty, 1,300 years ago, making it the oldest water town in the world. The small village of 3,000 is relaxed and intimate.

Just past the town gate, we watched as locals made rice cakes and matzo bread. Then it was on to the canals. A gondola ride in Tongli is a lot cheaper than the one in Venice, and the perfect way to enjoy an afternoon day trip out of Shanghai. Many Shanghai natives come here to enjoy a relaxed atmosphere, just as Angelenos might trek down to Laguna Beach for a weekend getaway. 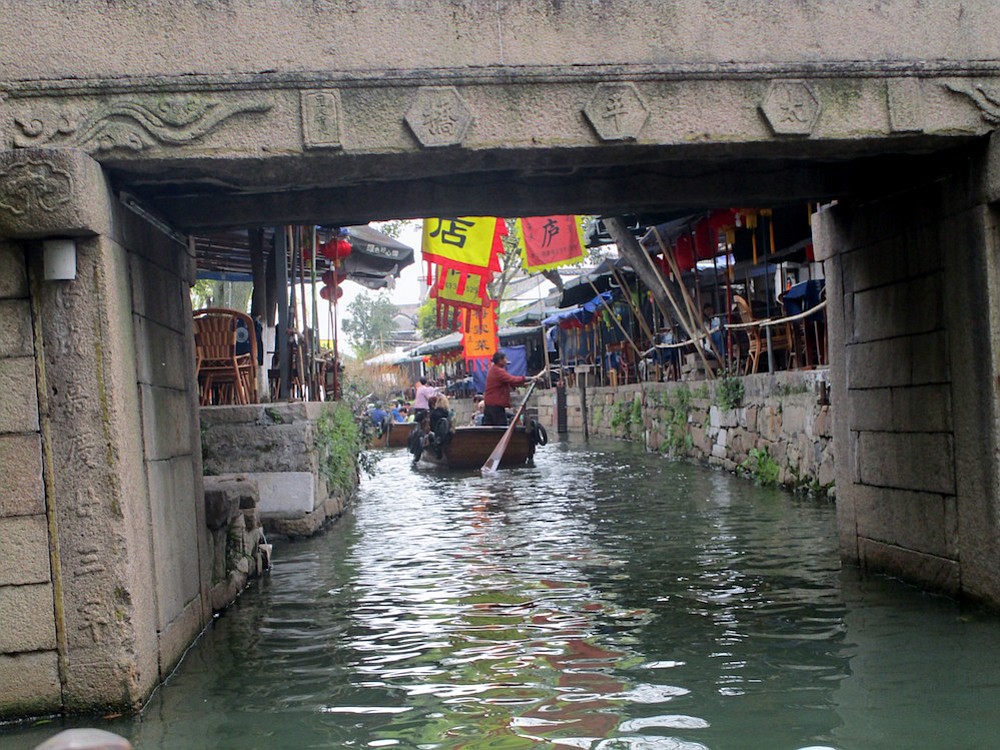 Passing under a bridge on a Tongli gondola.

For centuries the gondolas acted as water taxis through the labyrinth of canals. The Grand Canal passes through here, and it’s provided a highway of sorts for these water towns for over a millennium. It’s 1,200 miles long, longer than the Panama Canal. Lochs let the water in and out. No big boats allowed through here, though; the passageways are just too narrow (a good thing, as they would ruin the tranquil atmosphere).

It’s a joy to cradle an espresso at one of the many cafes that overlook the canal and just watch the scene around you as the afternoon drifts away. Old houses hang over the canal and several stone bridges with names such as Peace and Tranquility (Taiping), Luck (Jili), and Lasting Celebration (Changking Bridge) contribute to the theme of peace.

Much of the ancient architecture in Tongli remains, a pleasant contrast to Shanghai and Beijing where old neighborhoods are being stripped away daily. There are many small gardens that contribute to the serene atmosphere. Tuisi Gardens is the most well –known and visited garden locally and is also known as the Retreat and Reflection Garden. Chongben Hall and Jiayin Hall are other popular gardens locally.

Curiously, according to my guide, Tongli is not often visited by international tour groups but is popular with Chinese tourists. Open to visitors since 1986, it has only recently started to morph into a more tourist-oriented town.

Like Suzhou, in ancient times Tongli was often frequented by the higher echelon of Chinese society: Poets, painters and scholars would come here for relaxation and inspiration. Pavilions, towers, and temples built several hundred years ago contribute to the timeless quality of the community.

I looked around to capture the small moments before leaving. A little Chinese girl with her smiling parents waved to boats carrying a throng of unfamiliar westerners. A woman in a striking fashion posed for a photo shoot with the canal as a backdrop. Mopeds zigzagged along the narrow pathways past pedestrians — many of them Chinese tourists enjoying a throwback to a rural, simple life that offers a striking contrast to the high paced, ultra-competitive Shanghai.

Another beautiful town worth visiting on a day trip from Shanghai is Hangzhou. It’s been referred to as “heaven on earth” with its beautiful West Lake and green panoramas.