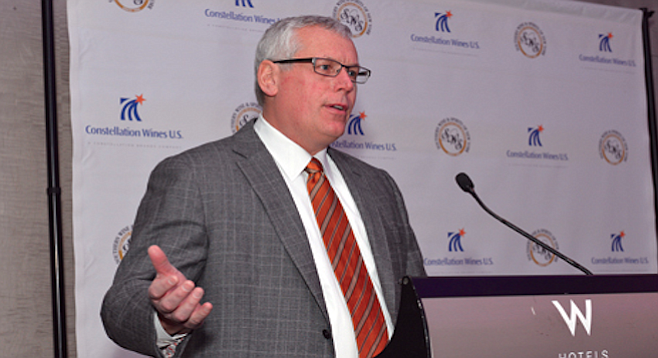 On the heels of Thursday's announcement by head brewer and COO Yuseff Cherney that we was leaving Ballast Point came the news that founder Jack White is also leaving the beer company he launched 20 years ago, then sold last year for an estimated one billion dollars to Constellation Brands.

Late Friday evening, Brewbound published an email sent by White to Ballast Point employees announcing his departure. It reads, in part: "I will be working with Yuseff to take the spirits brands to a new home we are calling Cutwater Spirits. We are excited to continue keeping our creative juices flowing."

A rep for Ballast Point confirmed that the departure — while appearing as sudden news last week — has been in the works since after the brewery's sale, and subsequent transition to Constellation's stewardship through the the end of last year. "It's something that they've been working on since the transition. Our deal with Constellation did not include the spirits operation, so we've taken a year to transition the spirits side of the business, and Jack and Yuseff decided they wanted to focus solely on that."

According to the rep, White and Cherney have already left Ballast Point. "They're officially both effectively out. But we are still moving forward in our plans to celebrate our 20th anniversary." Constellation Brands president of sales Marty Birkel has already stepped into the role as president of the now-subsidiary beer company, in town since last week to oversee the leadership transition that also included the departures of CEO Jim Buechler and CCO Earl Kight.

On White's departure, the rep added: "As a company, we've had his example and we're going to use that moving forward in everything that we do." At this time, the rep declined to comment on what prompted the departure of Buechler and Kight, but the net result is evident: Ballast Point is no longer being run by the guys who started it 20 years ago and is now a brewery under the leadership of Constellation Brands, based in New York.