Once a wealthy man’s sport

Yachts are getting smaller 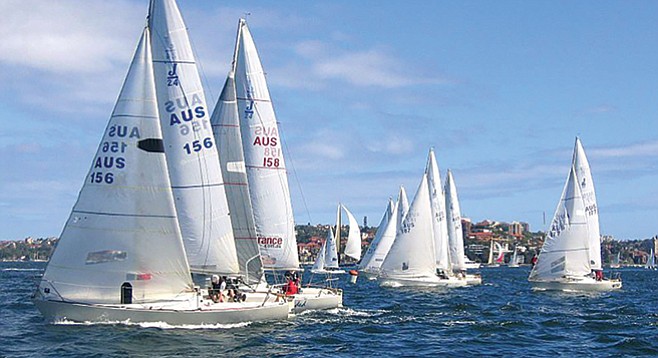 April 29 through May 1, the San Diego Yacht Club’s 2016 Yachting Cup will be filling San Diego Bay with colorful sails and crews vying for winner’s flags. Nearly one hundred entrants from a dozen or so clubs will compete in bay and offshore races; the Yachting Cup is one of the premier one-design and performance handicap events in California.

Performance handicap racing allows dissimilar sailboats to be raced against each other by offsetting the advantages of each boat design with time and distance adjustments.

One-design, known as “spec series” in motor racing, is a method of racing that has been adopted by most racing sports. Yachting was a wealthy person’s game, but now some of the most popular yachts are smaller, such as the J-70, a 22.75-foot, ramp launch-able keelboat that is priced at around $50,000. The J-70 is suited for a crew of three or four, so one can get into the sport for a few hundred dollars a month.

There will be eight races over the three days and after each day of racing, competitors will be invited to return to the San Diego Yacht Club for post-race activities and socializing.

For spectators, good vantage points from shore will be on Harbor Island for the bay races and along Point Loma for the offshore races. The best view will be from the water outside the courses.